Fiddlers - you're probably all very well aware already of the difference not only in volume, but in timbre as well of an open string as distinct from a stopped note. Same on acoustic. OK, yes, I know you can intentionally play with less speed, hair, or pressure on the open string, and I am at the stage where I can avoid the open string and use the pinkie on the lower string, but sometimes I forget - and you go "doh, that was unexpectedly loud" when it happens but keep on going.

Today, I set up a different effect from my usual on the EV, and it sharpened (I don't mean musically) the attack - and the open strings not only BOOMED out loud, they would ring on like forever if the next note was on another string!!!!! LOL.   I gave up trying to dampen it with another finger - here's the fix - elastic band pushed up tight against the nut. No real effect on the frequency of the note, but it sure quietens it down to something more like any other stopped string on the fingerboard....... 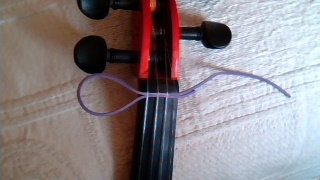 It'll stay there until I either remember not to use the open string, or I'm finished with this particular effect !

I use that trick with the electric.  But I've never been able to decide it I like it better damped or with the ring, since it can almost sound like a reverb when you are playing notes that are resonant with an open string.  So I switch back and forth.  If you use a dark coloured rubber band, you can trim it with a pair of nail clippers and it's almost invisible.

It is a great tip, though.. So I'll see you and raise you one.  LOL

As a PS on this topic, Bill, some electric violins actually come with a little rubber damper.  The one that comes to mind at the moment is some of Zeta's Jazz line.

This is a pic of one of Vanessa Mae's violins that she gave to be auctioned off to raise money for breast cancer charity.  If you look real close under the nut, you'll see a little black rubber damper.  Slightly fancier than a rubber band, maybe, but the same principle. 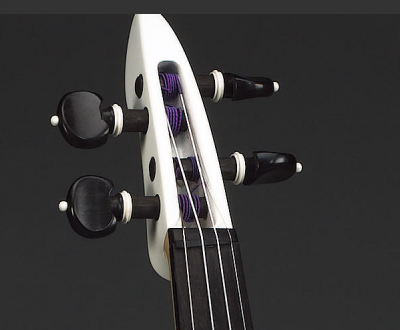 A difference is that it is slightly wider on the G string side, since the thicker strings move a bit wider when they vibrate and can use a tiny bit more damping.

I'm currently using a piece of a blue rubber band on mine because I ran out of black ones.  LOL

Personally I think it is a good solution.  Inexpensive, user-installable, simple, and obvious enough how it works.

Not really necessary on acoustic violins where the body will absorb and moderate some of the "ring".  But I'm kinda surprised it isn't common as a stock factory feature on inexpensive solid bodies, since it does make them play and sound a little bit more like acoustics.

I first saw a damper like that shortly after I got my electric in a local music shop.  It was on an electric violin with a sticker price of about 1k$, if I recall correctly.  I don't remember the make.

Aha indeed!  I didn't imagine it was a unique solution, but cool that I have something in common with Vanessa Mae.

Gotta keep the comparison fair, Bill.  I would be willing to bet that when you have put in as many hours of violin as she has, you'll be a lot closer to being a "contender" on ability.

But this trick/mod may fall kind of under some of what we mentioned in that other thread about acceptance by musicians.  An acoustic violin wouldn't need it, but the physics of sound on a solid body electric just aren't exactly the same.  It is a good sensible way to fix that extra bit of "ring" that electrics have.  But since "traditional" acoustics wouldn't need it, the acceptance could be kinda low with some musicians.  Mostly the ones that *don't* play electric.  LOL

Oh well, what do they know about it anyway?

I don't personally see avoiding the open strings as an automatic "virtue" or progress".  Sure, they sound a little different, but that can be a good thing sometimes.  My old jazz guitar teacher was death on any open string and was always ribbing me for playing "cowboy chords" sometimes or weird chords that are fingered up the fretboard a ways but still have some open notes ringing.

To this day I do not agree with him, and I like the sound of how I play better.  The open string sound in there sometimes is for me part of what makes guitars sound like guitars.  He plays very controlled and even all the time, but to me it sounds too much like an electric piano or something.

Besides, on guitar, I paid for those 6 open string notes.  They came with the instrument, and I'll be danged if I'm just going to throw them away.  Violin only comes with 4 of them, but when I'm working on "polishing" a piece a bit, one of the things I do is try both open and fingered notes when the possibility comes up and then decide which I like the sound of the best.

If somebody bought a piano or electronic keyboard and just yanked four keys off it and threw them away, we'd think they were crazy.  Or to make a closer analogy, on guitar (like violin) many notes can be played on more than one string, in different places on the neck.  If somebody who had a nice guitar put a dab of white-out on the spot for the E on the G string to remind themselves to never play that note because somebody said that way of playing it sounded bad or because only a "noob" would play it there.. We'd wonder what they'd been smoking.  Or if whoever told them that was off laughing themselves sick somewhere.

But back to the mod/trick itself.  If some major makers include it on some models, and some players like Vanessa Mae considered it perfectly ok to play major concerts and recording sessions on a violin with it.. I'm not going to lose any sleep over using it.  If anyone were to ask about it, we can just say "Huh.. Didn't yours come with one??  Well that sucks.."  Show them a pic of Vanessa Mae's violin and tell them that maybe it's a defect that they don't have one and they should call the vendor and complain until they send them one.

"You know, you ain't ever going to get Vivaldi's Storm to sound as good as she did without one.. Better call the place you bought it at on Monday and make them send you one.."