Frets for your violin!

Frets for your violin!
A jig building and fret installing project to follow

The frets I use are the smallest and shortest fret wires available. From Stewart-MacDonald they are PN#0764. Dimensions are: width: 1.35mm (.053"), Crown height: .94mm (.037") and the Tang is 1.37mm long (.054") which is the part that goes in the slot. They are also used on modern style banjos, mandolins, ukuleles, and dulcimers because of their tiny size.

You can play the violin strings 'between' the frets as well on mine, and not simply "on top" of the fret like a guitar. They can be easily played with vibrato too.

Yours make more sense to me Dennis. I wouldn't want to be limited.

I've been kinda busy lately, missed out on Streetjelly with Wil Bill, even missed out on some personal activities I was looking forward to but oh well, gotta make that money when you can...

So, I finally received my laser engraver, got it set up, learn the Chinese language in 24 hrs, and decided to give it a go.

I'm in the process of making my own electric cello, and wanted a nice fingerboard on it so I dropped a few buck (!!!) and bought a beautiful Rosewood cello fingerboard...and of course stuck it in the laser and went nutz on it. Here's a few pics.

I then got involved with Toni (CoolPinkOne) in making a Cigar Box Guitar! Oh my! ...so I wanted to follow along int he same tracks as my electric 5 strings I'm making and continue with that style, so here's some pics of that CBG neck, I'm waiting on tuners to come in and will be putting it together for the last time real soon. I only put in frets for the 3rd, 5th, 7th, and 12th fret positions. I'll have a 650mm strung length and probably start playing blues with a slide. All in fun. 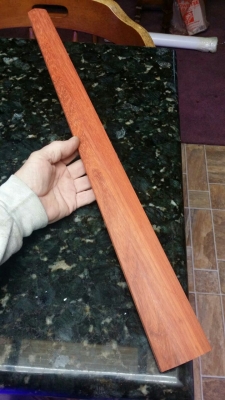 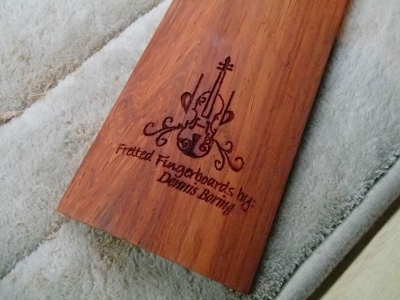 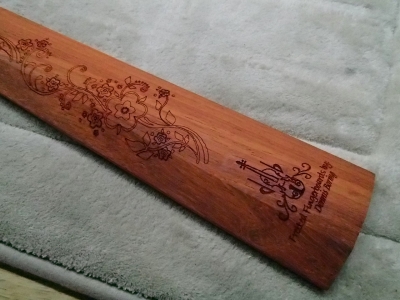 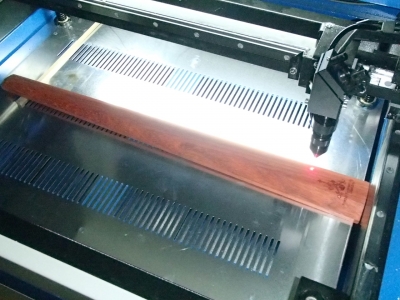 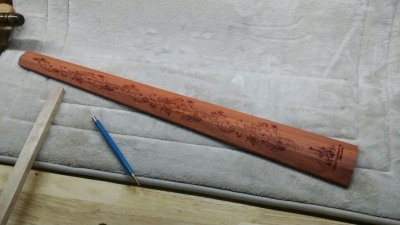 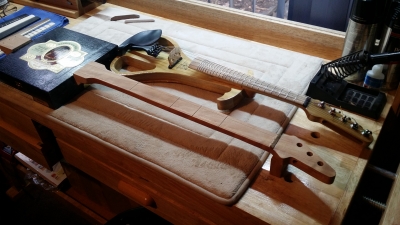 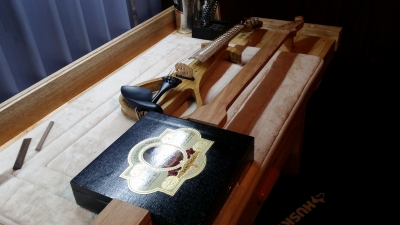 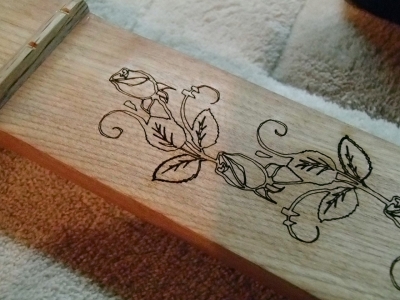 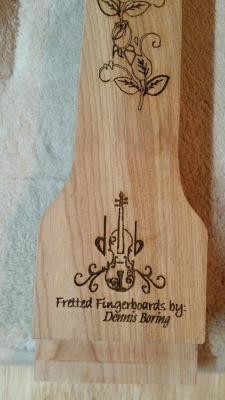 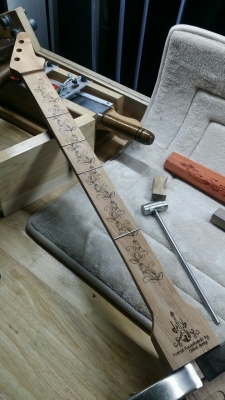 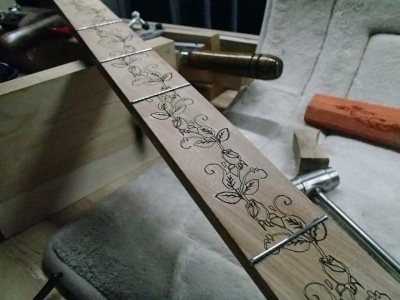 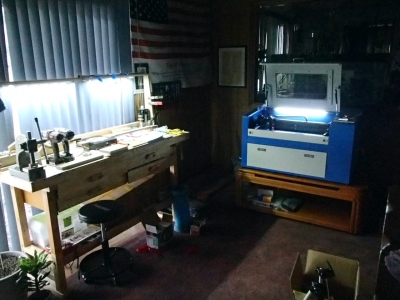 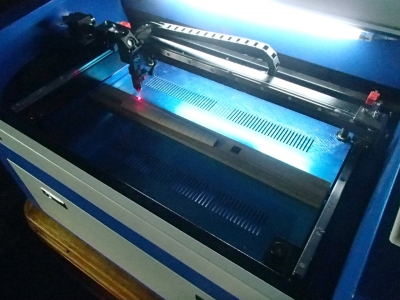 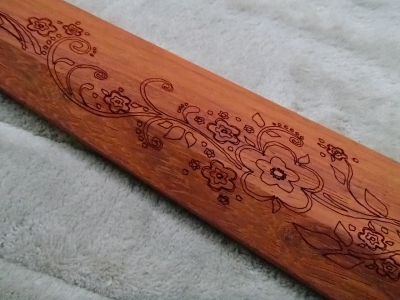 That fingerboard is beautiful! I just love it 🙂 The work you do is very cool

That is some seriously cool stuff.

That cello finger board.. OH my... What a beauty.  Will your cello that you build also be off the same type head stock to match the fretted evs, and CBG?

Great stuff Dennis. Maybe you want to join Holstein Violins in our booth next year. We will at least have a double next year and in a much better location than this year. 🙂

Way cool, Dennis! Nice work and it looks like an interesting process. Did you design the artwork yourself?

Fiddlerman said
Great stuff Dennis. Maybe you want to join Holstein Violins in our booth next year. We will at least have a double next year and in a much better location than this year. 🙂

Oh My! What an honor that would be!!!

I'm speechless... who knows where I'll be next year but I certainly will entertain the option and stay in touch about it.

Thank you so much for that vote of confidence.

As a violin player, I would love to try a violin with frets.

I started playing violin in college, and now I have a job, a house, and kids. This puts me at a distinct disadvantage to those players who started playing before kindergarten. I no longer have hours of free time every day to practice my intonation, and as a result I tend to stick to what I know: first position.

Now I'm playing in a band, and we're doing a cover of Stand By Me, which is great! But the solo goes up into 3rd position. I'm practicing my shifting every night so I'll be able to hit the notes spot on. But all this time practicing my intonation is time that I'm not practicing other techniques.

I'm a beginning viola player who is very interested in fretting my Mezzo Forte carbon fiber viola (ebony fingerboard). How do fretted instruments accommodate sharps and flats? Is there fret positions for a natural note and another  fret for the sharp/flat? Sorry if this is a silly question...

Gerald - there is effectively a single fret position for each note on the chromatic scale (just like a guitar, mando, etc).   It's a reasonably straight forward thing to mathematically compute the necessary positions - but - if you read back through this thread - Dennis ( @cdennyb ) has already detailed this - hang on - go back to post 5 of this thread....   Denny will be able to point you towards further information....

Yes, Dennis is the fretting expert and would certainly be able to help you one way or another. I don't know anything about the costs but his work is beautiful.

Just to briefly fill in some of the gaps in the thread... I apologize for not keeping up to date on this thread and answering the many questions so here goes:

The fretting is only a guide to playing in perfect intonation. Back early on in the thread is a link to Mark Woods and how he explains the frets and playing "between the frets" and doing slides, vibrato etc. just like a regular non-fretted fingerboard! You still need to have the muscle memory to play well but this also assists you greatly when playing in a band or a loud environment like outside with noises etc. playing third position is easy as first position because once the fret position has denoted the frequency, it will always be the same spot and the same note, but beware, the frets I install are very low, very narrow and you can play between the frets just as easy. Unlike a guitar or mandolin, you play "on top" of the fret not "behind the fret" like a guitar or other string instrument.

The cello fingerboard was a beautiful expensive piece I just had to have when I was building my electric cello. Here's a couple of picks of it, a maple ply and spruce ply laminated body, a typical and "normal" neck and peg head scroll (had to have some part of it traditional!) and of course electric piezo pickup and module for hooking up to headphones or amp/mixer board for unique effects and such additions to the sound.

One of the biggest challenges on fretting a fingerboard for a viola or violin is that an acoustic is almost impossible to do properly, as the soundpost is easily relocated which can change the sound produced which will no doubt change the position and location of the bridge, which changes the 'strung length' of the instrument and thus the location of the frets! On an electric instrument only the strung length is majorly involved in sound production. Once the bridge location is set, the fret location is calculated and the fret slots are cut, frets pressed in and leveled and shaped, job done.

I've built a couple of cigar box guitars lately in addition to the electric cello and now I'm currently building a 4 string CBG. I did phantom frets on the cello and one one CBG I did only the 3rd, 5th, 7th, and 12th frets. The second one, I did a full neck of frets and on the 4 string as well which is under construction.

Lots of projects finished as well as in the works! 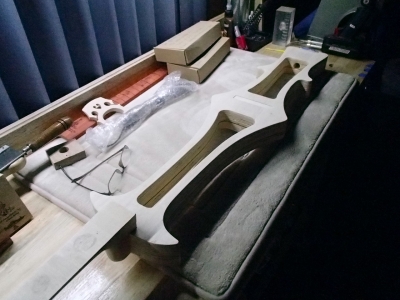 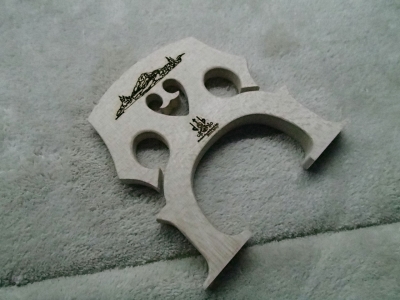 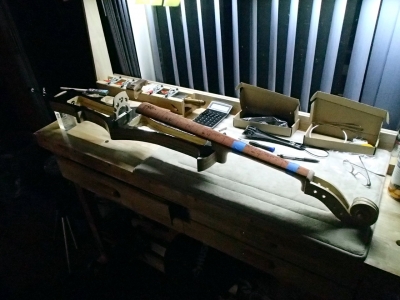 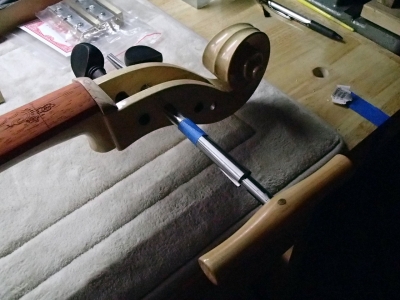 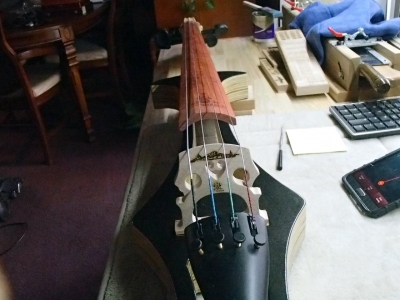 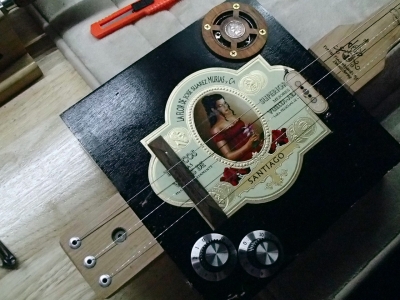 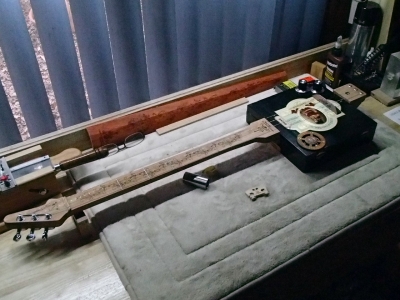 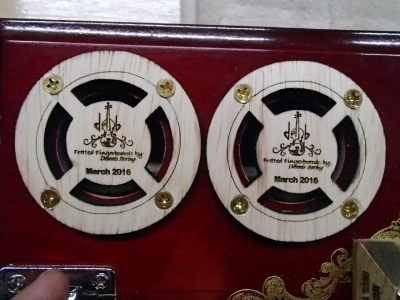 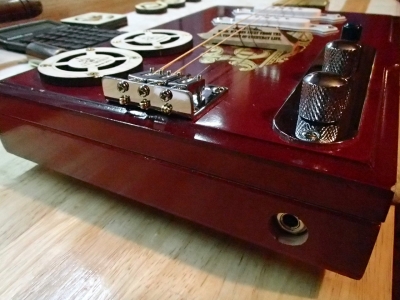 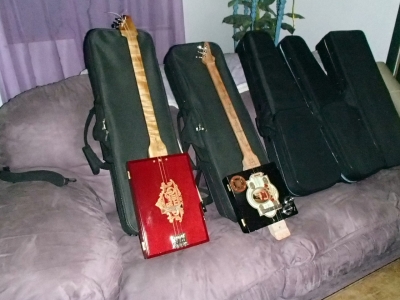 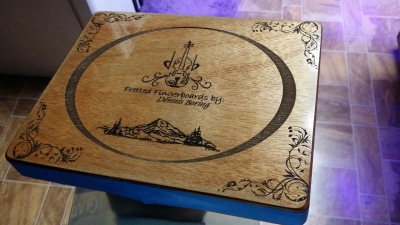 Did you have to raise the nut a bit to accommodate the rise of the frets?  if so, how much?

I have not read completely through this tread, so forgive me if this has been previously covered.  Someone is selling a plastic sheet with embossed frets that can be applied to a violin.  I believe that the original maker was from Canada,and that they were bought out by the D’Addario String Company.

Some additional information.  Peter Stoney developed a violin and cello adhesive Applique called “the fiddle fretter” that was briefly marketed by D’Addario as the “violin fingerboard Applique.”  It comes in an optical (visually looks like a mandolin fingerboard) and a stealth version (pictured below).  I perused eBay and the D’Addario is available at $11 and the fretter goes for $28.

I originally used one of those appliques to see what the situation would call for as to height and usability. The height of the frets was the lowest available from Stew-Mac so I only set the nut a tiny bit higher, but on the cigar box guitars it was to be played with a glass bottle slide so any height was acceptable. The violins on the other hand needed to be fine tuned a little with me trying to maintain the same height above the frets as the strings were above the fretboard without frets.

The adhesive add-ons are nice in theory but seldom would be in tune because not every violin would have the bridge int he exact same spot. They were quite a fun thing to play with to get your pesky fingers to go in the right spot for better intonation if you have an issue with a few certain notes not quite in perfect pitch.

Hope this answers the question(s)

We used to sell these back in the day before D'Addario discontinued them.