I'm not a luthier. While I tend to be much more technically minded than most string players (being a patent attorney), I do not attempt repairs on my instruments because I am not very good with my hands and my instrument is worth far too much to risk damage. My viola is literally worth more than all my other possessions combined, including my car and my violin; and I've never in my life owned any string instrument that was worth less than $1,000 or any bow that was worth less than $250. I also haven't had the luxury of being able to take my time getting repairs done, because I've been in orchestras without interruption since about 2002.

(Not trying to be an instrument snob, it's just the circumstances of how I started playing, namely that I started out with a long-unused family heirloom violin and have felt no need to buy an instrument worth less than what I already had. I've had student instruments on loan while my own instrument was in the shop, but obviously those weren't mine to tinker with.)

I had a tip plate crack at one point, causing all the hair to come out of the tip, and that was when my luthier told me it could be replaced with very little extra effort because it had to be removed anyway with each rehairing. Perhaps this was true of my bow but not true of some other bows. I'll note that with my bow the wedge popped out and broke off half of the tip plate in the process.

Hi AndrewH (and others).  No problem with the tip plate, but if you remove the frog screw from the bow that was worked on and lift the hair away from the tip, I think that you will be able to see that the extants of the wedge is outlined in the tip plate (or maybe not if the luthier was correct on your example).

My growing list of string instruments explore the opposite economic stratus than yours, and that allows me the opportunity to experiment on them at will.  I recall that a famous California inventor (he invented the plastic used in the Barbie doll, among other things) was married to one of the Gabor sisters.  She had obtained a Rolls Royse from the settlement of one of her previous marriages.  One day the inventor wanted to see if the prestige of the Rolls was justified mechanically, so he proceeded to take it apart.  His wife was not amused.

I have read a book that I think that you would enjoy.  It is called the Deadly Fuse, and it is about the development of the proximity fuse in World War II.  The American device was based on a tiny vacuum tube created in the 1930's for hearing aids.

We all have our "Peter Principle" area.  I just placed a photo in one of the threads on this forum and it felt that I had gone to mars.

Not sure about opposite economic stratus -- my viola is actually still below the average value of string instruments in one of the orchestras I play in.

But that's because so many of the musicians in that orchestra have or have had professional aspirations -- it's semi-professional, over 75% were music majors, and alumni have made it into major orchestras (San Francisco Symphony, Cleveland Orchestra, New York Metropolitan Opera). $10k-20k, the price range my viola is in, is considered a low-end professional instrument. Given that I'm often around professional musicians whose instruments are worth two or three times as much as mine, I consider mine to be only a mid-level viola.

I have spent a large portion of today looking at violin bow rehairing videos.  I think that I can do this.  I don't understand why people are spending time tying a complicated knot in the hair ends when the same thing can be done in a few seconds with about 1/8" length of electronic shrink tubing.  They even make it with a heat activated adhesive.

Hi AndrewH (and others).  I just bought a Cecilio "silent" violin for $30 with shipping.  It is likely your musician friends spend more than that on a cake of rosin.

Irv said
Hi AndrewH (and others).  I just bought a Cecilio "silent" violin for $30 with shipping.  It is likely your musician friends spend more than that on a cake of rosin.

(Edit: WITHOUT shipping might I add.. these evil shops....)

Not quite. Hill rosin, one of the most used at this level, sells for $12. You would have been right if you said shoulder rests, though. Well over half of the violinists and violists in my semi-professional orchestra (including myself) use wooden shoulder rests costing $60 or more.

In any case, I don't really tinker because I'd probably break any instrument or bow I try to do any work on myself, and buying multiple cheap instruments and bows to tinker with can get to be an expensive hobby rather quickly. I wrote extensively on violin acoustics when I was younger, so know in some detail how the violin itself is put together, but with bows I'm going entirely with what my luthier tells me, which seems accurate at least with regard to the bow I use regularly.

I wanted to give an update on the metal violin bow.

The original black paint is mostly missing toward the frog end of the bow.  I called local plating companies and no one is interested in applying a nickel finish to the bow.  I then called a couple of gun smiths.  They said that their tanks were too small to handle the bow.  So I looked on the web to see if I could do it.  I think that I can and I purchased the chemicals to give it a go.

I am going to use a length of pvc tube for the plating tank and 99% nickel welding rod for the anode.  The chemicals that I need are on the way.  The tank will be heated to 140 F and I will use a 4 volt dc "wall wart" power supply.  The hardest thing to find was sodium saccharin (used for a brighter finish).

I am not going to artificially weight the bow to bring it into normal limits.  I am going to rehair it with black horse hair to give added rosin grip and will use a lead core fishing line wrap near the frog for balance.  I am still concerned over moisture and have purchased black latex rubber surgical tubing for the thumb grip.

Nothing about this bow is going to be orthodox, which is OK with me.

I just purchased a second steel violin bow off eBay, this time a 4/4.  They must not be very rare if I could get two examples in less than a month (at a very low cost).

I just received a second metal bow, this time a 4/4 size.  It has an extremely thin shiny metal tip plate that was very attractively done.  The black paint on the stick was worn away on the hair side of the stick and it appears to have a copper plating under the paint.  It has a small leather thumb pad. The lacing is gone but it is evident where the start and end points were.

The end of the stick where the bow hair is fastened is not magnetic on this one.  It has the same design features of the 3/4 size one I previously received.

Irv said
I just purchased a second steel violin bow off eBay, this time a 4/4.  They must not be very rare if I could get two examples in less than a month (at a very low cost).

I doubt that there's a large supply of metal bows, but the demand must be even lower.

I just looked for the reasons they didn't catch on; it seems the hollow metal bows on the market were not as durable as wood bows, and in particular had a tendency to dent when dropped. They were mass-produced for a decade or two, and were then replaced by fiberglass at the low end of the price range and carbon fiber at higher price points. I think I noted earlier that one of the later patents citing the ones you linked was for a fiberglass bow.

Hi AndrewH (and others).  Using the new data (copper plating), I went on the internet and found that the bows were manufactured by Heddon of Michigan (patent US2252929 August 19, 1941).  The metal thickness at the frog end was 0.013" and the metal thickness at the tip end was less than 0.009".  The tip was constructed of bronze and soldered to the steel shaft.

It would be very difficult for me to fabricate a metal tip plate to match the existing.  I think that it would be best to silver solder the underlying bronze and polish for a pleasing appearance.

It is interesting to see cost reduction changes made to a manufactured item over time.  I recently purchased two Heddon metal bows and both had a lock and key metal joint to secure the ends of the frog ferrule.  New to me. 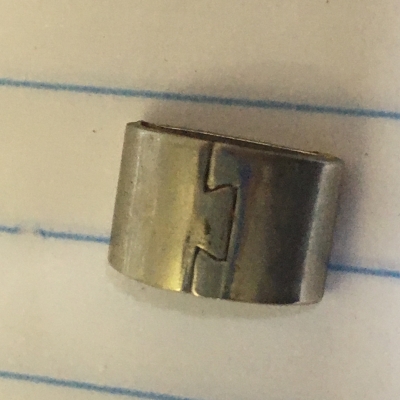 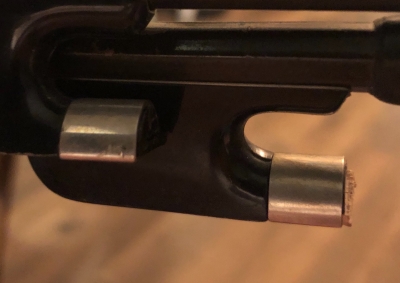