• Please begin by telling us anything you would like to about yourself. Age, place of birth, residence, etc.
Hi all, here is Robert, I'm 53 and reside in Kent, Washington State, USA. 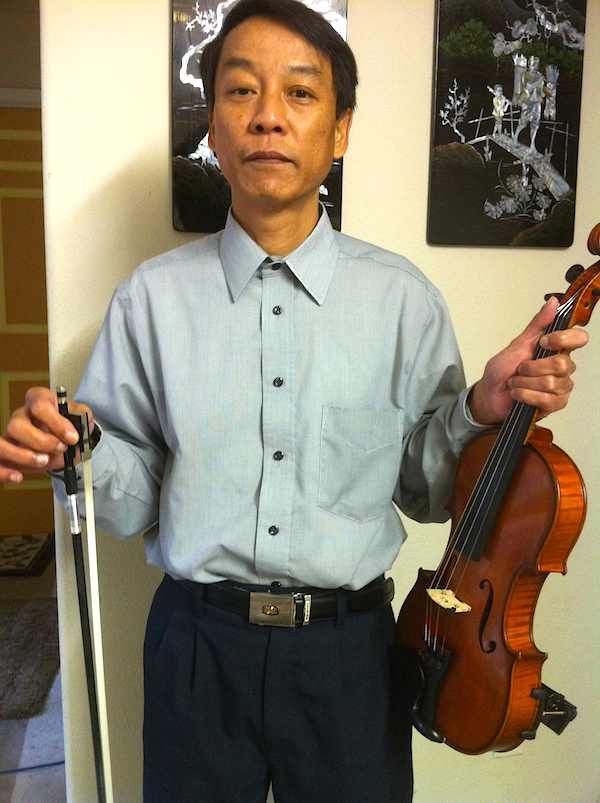 • What made you decide to play the violin?
Playing violin was my dream when I was a little kid. It did not come through after 40+ years and finally I got to start learning to play.

• How long have you been playing the violin?
I'm at 16 months into learning and one year of fiddlerman.com member.

• How often do you play? How long are your practice sessions?
I would love to practice every day for about 30 minutes to an hour, maybe a bit more on some days when health permits

• In your opinion, what's your proficiency on the violin?
Not very proficient yet, but improving every day, after every practice session.

• Your greatest personal experience with playing?
I was so thrilled when recently a girl overheard my practice when walking by my room (think it was Irish Washerwoman) and a bit later on commented that I sounded pretty good. The story was over a year ago when I first started without…

Nice to meet you.  Good interview.

very nice to meet you and learn a bit more about you, Robert!

love hearing how playing music has been a part of your journey back to good health!

It's great to meet the man behind the music. You have come very far in what is really a short time. Keep well and keep fighting.

It's nice to meet You, Robert! Your violin family is impressive!

You're doing great in your playing and i wish You further success! Actually, knowing what is behind your violin life makes me amazed by your will. Wish You good health, and keep up your great work with violin!

I really enjoyed your interview ratvn. I watch all your vids > SWEET!!! > Your passion for this instrument is deep and I felt that before reading about you. It always seemed to come out in your playing. Your are truly a player, a musician > one who brings sounds from the heart.

Nice meeting you Robert, and I love your survival story.  Having spent many years working in Oncology and Palliative Care, I really love the attitudes of some of my patients ... 'This cancer won't get me!'

I was interested to hear you tune your violin a semitone down, I didn't know that was possible.  Is it just for particular strings, or your general preference?

That was a great interview, Robert.

I was sure you practiced more often just from the way you play. Real nice.

Thanks all for your encouragement and support.

It's a privilege and my pleasure to get interviewed. Thanks FM for putting it up.

@Robyn.fnq: thank you for your encouragement. I'm not off the hook yet, still on their radar scope and hopefully I won't fall off their screen that quick.

the semitone tuning down is a still a debate of whether it sounds better so whatever works for you is good. Some of Baroque pieces were played with A=415Hz, with gut strings and original violin design, instead of higher neck angle, string tension to make for better projection, solo that needed to stand out from the rest of orchestra instruments. The standard tuning today, mostly, is A=440, in USA, as for piano and other instruments, but there are countries that specify it differently, A=415 for example.

The only inconveniences with it are when playing with some fix tuning instruments, piano/keyboard/others for one, playing in group project in which there is a set of tuning pitch and tempo to follow, or playing along with an audio from youtube tuning at A=440.

A=415 for violin is not just a transposition, IMHO, as there would be less string tension, string/bridge sound transfering/coupling would emphasize the mid and low range while reducing the high, thus would make it sound a bit sweeter/richer less harsh, and of course lower volume/projection, which is better for me as to not disturb others, also less string tension means it's easier for my fingering and strings, and I've done it that way since a few weeks into learning, up until now as general practice with quite a few different string sets. I would be happily to retune mine up to 440 if I have some one to play with. As for youtube tunes, there is Amazing Slow Downer (for pitch shifting) which is not only for practicing but also can output a .wav file with new setting/tuning, that can be input to Audacity to play along with (for multi-track recording) so everything would be in tune. In fact, all of my posted audio were with my violin tuning at A=415Hz while the audio tracks were at A=440Hz originally (then tuned down using Amazing Slow Downer to shift to the required pitch).

If you like to, you can also give it a try for a few days to see. I also have one violin tuned to A=440Hz just to follow a quick youtube tune/or some similar, so I don't have to go through all the trouble of retuning the audio piece to fit in with my violin. Whatever works for you will be best.

Thanks Robert, that's very interesting.  I use BP Minus for the same purpose, and was a bit confused about pitch changing, but have discovered each number lowered is equal to one semitone, so I suppose that would equate to A=415, as you explained.

I might try that with my silent electric Cecilio, as the strings are not as high quality as my acoustic, and I use the electric for most practice to spare my family and neighbours.  I have a tuner/metronome that's adjustable in pitch, so it should be straightforward.

It's worth a try, and as you say, might sound more mellow.

Very nice interview, Robert! I really enjoyed getting to know you better. Your violin collection is impressive.

Thank you so much, Diane, @KindaScratchy for your encouragement and support.

Robert, what a great interview.  I just loved reading it.  It is so authentic, just as you are.  Thank you for all your help  on the chat box and for being such a nice guy.  I look forward to many years of playing violin with you.

You said you play some 'ethnic' insuments. Do you have any experience in anything like the Chinese 'urhu'

I bought one back from China this year and things aren't going all that well with it.

Thank you, Toni, @coolpinkone, and John, @Ferret for your encouragement and support.

@Ferret, John, I have a Vietnamese version of the Erhu in my instrument collection. It's very similar in construction (Erhu was originally from a minor ethnic group, near China).

My teacher at that time, about 20 yrs ago, only showed me the basic tuning/playing but I did not pay much attention to it as I was concentrating on some other instruments, Zither, monochord and later, a 2 stringed round shape lute.

Since the instrument was designed to play some particular musics, using it for western tunes requires retuning/adaptation to western musical scale, and the tunes are to be transposed/modulated to the instrument particular tonic pitch/note.

It should not be harder than playing violin. The Vietnamese one was adapted to play traditional musics, but it also could play some western tunes being a fiddle.

There are several ways to tune the instrument, depend on the type of music being played (Vietnamese traditional musics employed several tuning systems), and the one closest to western scale would have the tuning in perfect fifth (your favorite, John), a perfect fourth would also work (which is a fifth at one octave lower).

Great interview Ratvn!  Nice to know you, sir.  My thanks to the girl and FM for having brought here.

Thank you, @suresh for your encouragement and support.

You're among the most wonderful members of the forum.

That was a great interview!  Very inspirational.  Keep on keeping on!

There is no failure, only results.