Alrighty, here goes - I'm a 34 year old gal returning to my violin/fiddle after quite the hiatus. I self-taught myself in 1997 to play the fiddle and just loved playing celtic/cape breton music. My mother purchased me a secondhand violin from a friend of my grandfathers, and I was in L-O-V-E with her from the moment I held her. I was told she came from Maine, and in the inside is hand written Dec 1934.

I'm not quite sure why I abandoned it, time I suppose - I also had brought her to a luthier to do some work and he pretty much shot her down and exclaimed that he'd "never be able to make a bridge that small", and that she'd be a good fiddle but not for much else. I guess that disheartened me - not sure. I had a different luthier do work on her years prior, in fact he's the one that custom made me the bridge - sadly he's no longer with us.

Regardless, it's probably been close to 10 years since I've played and I dug my girl out last week, tossed some new strings on her and I'm in love again. I don't know if she was someone's first attempt at making a violin or a restoration not gone well, but she still plays quite well, weaker outside of 1st position but I'm not sure if that's me (likely) or her (could be both). I'm sure I may outgrow her at some point, but I'll deal with that when the time comes.

I bit the bullet and scheduled some lessons to break some bad habits, and I even ordered my first really decent bow - the Fiddlerman Carbon Fibre bow! My current bow is - gosh - close to 20 years old now, it's an old Glasser that has seen better days.

Amway, here's to restarting my journey and making great music!

Congratulations, @Christine (moonlitday) ! Great name, BTW. I enjoyed reading your story, but I can't understand the luthier's remark that your girl would be a good fiddle and not much else. What else is there??

Seriously, though, if you enjoy playing Celtic and Cape Breton music, that's fiddle music, so what's the problem?

Doesn't matter, though, you're back in fiddledom and you've found Fiddlerman.com, so it's all good! Sounds like your fiddle has lots of character, which is great, I think.

Looking forward to your posts!

Welcome.  It sounds to me like you need to find a different luthier, because what he said doesn't make sense -- unless he was using that as an opening to try to sell you something else -- in which case -- you need to find another luthier.

If Cape Breton is what you play, then a fiddle is what you want and you won't be getting out of first position much anyway.  If the old girl sounds good then there's no reason not to be playing her.

I've got 2 of the FM carbon fiber bows and they work very well, especially considering that a pernambuco of similar playing characteristics would be several hundred bucks.

Welcome to the site, keep us posted on your progress and if we can help with anything just ask and you'll get lots of answers to choose from.

Welcome!!!  It sounds like you have a wonderfully unique violin

I'm glad you've found your love of the violin again after a break. Sometimes its a break we need ya know!

Look forward to hearing and seeing more of you on the forum. I'd love to see some pics of your violin.

Welcome, 10 year break, no sweat I took a 30+ year break and I'm coming back. How be it I don't remember having some of the issue I'm having now back then. You'll do just fine looking forward to hearing your progress.

I love your story!  I think your violin sounds so lovely and so do you.  Welcome welcome.

I look forward to talking violin with you.  Congrats on reigniting the passion and getting out your lil lady.

Edit: lost the text I posted.

Y'all are so nice!

Here's pics of my girl, as requested! As you can see the fingerboard is pretty low, I believe that is what that luthier was referring to. Anywho, I will save my pennies and purchase a new addition in the spring - I've been eyeing the Soloist and the Kreisler replica - but I'll muddle through on this one-of-a-kind for the time being 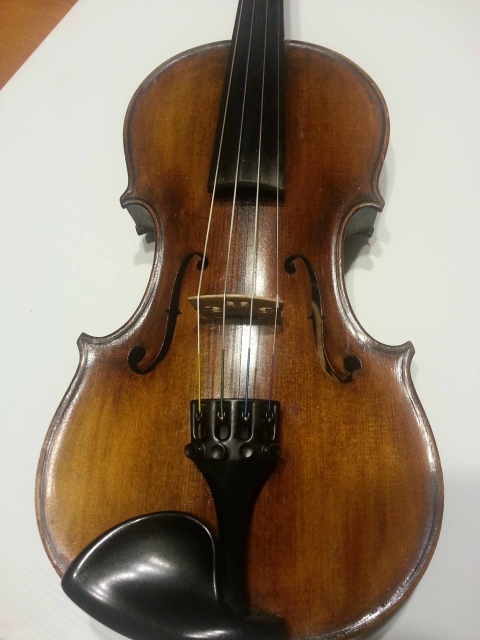 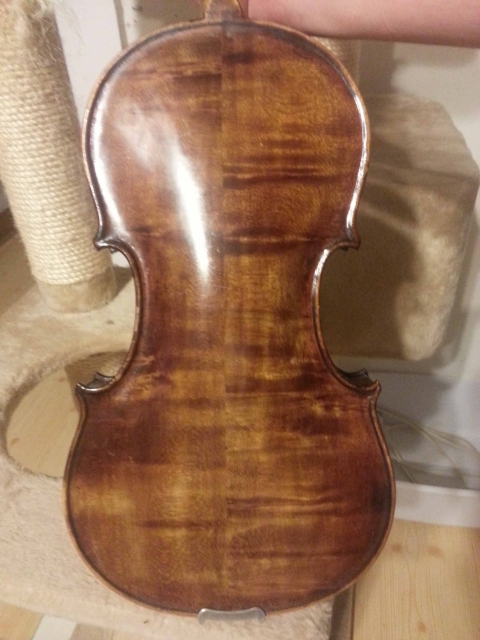 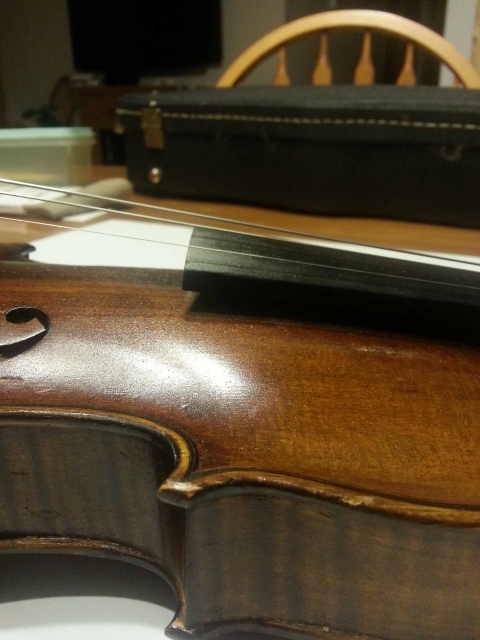 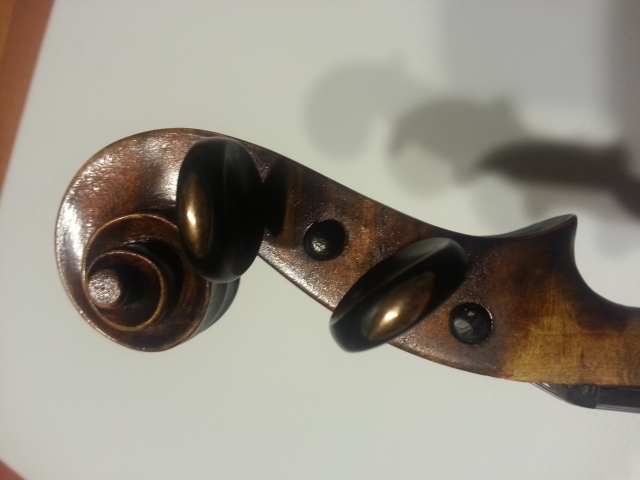 Uzi said
Welcome.  It sounds to me like you need to find a different luthier, because what he said doesn't make sense -- unless he was using that as an opening to try to sell you something else -- in which case -- you need to find another luthier.

Exactly. My guess as well. And if you want another fiddle, don't go to him, come to us because we don't do that......

LOL, just kidding, keep your baby and enjoy her just as you always have.

I am a guitar luthier, but I'm going to point out a couple of things about your fiddle...

1. It's awesome. Seriously. It's really awesome, it was likely handmade out of local materials. The top looks like a version of spruce that grows above the snowline in Maine. In the early part of the twentieth century that area was renowned for producing amazing tonewoods. In part it's what has enabled Martin Guitars to have a 100+ year run of amazing guitars.

2. The bookmatch on the back of it is two pieces. This shows me that it was definitely handmade, judging by the depth of image and general type of finish. It looks like whoever did it took a long time to get it 'just right'

3. The volute behind the neck looks a tad different from normal ones, but that may just be that I'm used to guitars.

Now, don't let anyone get you down about your instrument, it's a beautiful piece of work. It sounds good and plays good so make good sounds with it! Luthiers can have off days just like anyone else, so I'll say that the guy probably took a look, saw that it was 'homemade' and just put it into a mental file and forgot to take a good look and listen to it.

Lots of luthiers are terrified of touching family instruments that were made in the garage, there's no manufacturer to fall back on in case something catastrophic happens and there's no way to accurately judge value, except as an antique or heirloom. Sometimes they get sued over mistakes they make with instruments like that and it becomes a big mess.

I wouldn't let one luthiers opinion worry you at all, Jam On!

Who really cares what a Luthier says about its value or quality. You are the one enjoying it. Take it to someone who will give it the care you require of it. Someone who will appreciate it for what it is, what it means and where it came from.  I like Joe Average's input about it all.

You could take a 1974 Plymouth big block gas guzzler to any mechanic and they think what a wreck. Not much to do with that "thing". You really should get a new... blah blah blah.... (fill in the blank)

Taking that same vehicle to one who sees it for what it is, knows where it came and appreciates its history will see a Legendary Hemi "Roadrunner" classic and be Honored to work on it for you.