But, as I was checking into that film score, I found this great fiddle tune (totally unrelated) by Jim Sutherland, but also called "The Quiet Man" - here played by Fiona Cuthill.  I think this is a Scottish Strathsbey(?)

Then I ran across this tune - again totally unrelated to the Hollywood film, composed by Peter Miller.  A completely different, "The Quiet Man" - features Steve Wickam playing the fiddle!

Miller's backdrop of his video is the film "Coastal Village" (1943, Cornwall).

A little trivia (much more humorous bits on the IMBd) - one of the few Hollywood films with some Gaelic spoken in it!

Another favorite, perfect for this evening!

This film has a GREAT score - using: The Wild Colonial Boy, The Young May Moon, The Humour Is on Me Now, Mush-Mush-Mush Tural-i-addy, The Isle of Innisfree, Galway Bay, Rakes of Mallow, Rising of the Moon, Garryowen, I'll Take You Home Again Kathleen, The Kerry Dance, Barbary Bell, Believe Me If All Those Endearing Young Charms and Mitty Matty Had a Hen. (IMDb)

Performance can be heard here by "The Dublin Screen Orchestra" and conducted by Kenneth Alwyn. 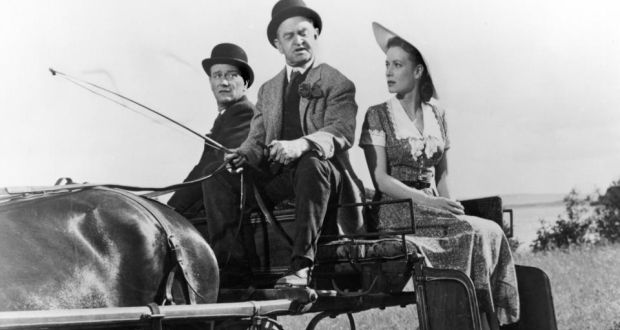 ...no wonder so many tunes sound familiar to me.