So Lorna and I happened on a fiddle camp and jam over the weekend (the violin store we had visited called and gave us all the info, sweet!) - and it was an absolute blast!

But....we were not allowed music, and they ran through each song real quick note by note, then everyone played, sounded awesome...but after the 2nd song I had forgotten the first one! - Luckily a couple of 8 year olds and one of the guitarists buddied up with me, and in-between fits of giggles they helped me fumble through.

I learnt to chunk, not sure if thats right word, snapped a couple of hairs off my bow, which made me look real pro!...NOT!

As an adult, I felt kinda lame not knowing how to pick up on what they were playing, and join in, but I can't seem to remember the notes to songs so quickly, and I'm not sure I could tell the songs apart, I was so lost without sheet music.

Maybe its just a fiddle thing, maybe just start with no sheet music then I wouldn't rely on it....but then do you play by ear first? I'm not sure, but I want to be ready for the big camp in summer...

PS. Wore my new fidderman hat and quite a few peeps commented on the awesome vids and website!

I would be in the same boat as you.

I have seen several over the years on the forum keep going to these functions and start getting the hang of it.

Good Job and keep trying.  I am sure you'll be there soon.

What my teacher tells me is to memorize what I can and not bring sheet music (not that I've really truly sat in on a jam like this, I have attempted, haha, and my goal is going to one in July, so I'm working on learning a bunch of tunes to be ready).

Maybe they could give you the name of a few tunes they play the most, and you could work on memorizing them?

However, chopping along is good, you get to be the rhythm section (that's what I did my one and only time sitting in with a group).

My teacher also said watching peoples fingers to see what notes they are playing, and just attempting to play it softly is ok, and also just trying to play a note here and there is ok, too. I saw fiddlers hold theirs guitar style to sit and work out the tune, and once they had something close enough they'd start bowing again.

thanks girls, I did look up some songs they played, tennessee waltz, and such, they have some online vids, so I might try and go off those, so since I wont have the music I will have to remember it! - They said that most of the music was passed down through generations which I thought was really cool, so some of the sheet music doesn't exist and then they put their twist on it.

@ damfino Hey I hope you have a fun time at your camp too !

PS - Chopping not chunkin - oh boy....thanks for heads up!

Probably each area calls it something different, so it's possible they were calling it chunking 🙂

And thanks, I'm looking forward to it. It's a nice little informal thing at a living history museum, I've gone for years... before I ever even thought I'd ever play an instrument, just to hear everyone else. This is the link to the event: https://www.wrhs.org/events/mu.....al-2-copy/

That looks great, and a lot of fun, hope the weather is nice for you! We are getting some nice weather now and I am tempted to go play a couple tunes to hear what it sounds like out in my back garden...

...and cool pink, thanks for doing that competition thing, I"ll proudly wear my hat at all the events I can get to, and hide it when I hit the wrong notes!

Mimi Aysha said .........I learnt to chunk, not sure if thats right word, snapped a couple of hairs off my bow, which made me look real pro!...NOT!

I always thought that chunk as a verb was to eat food with a drink or to drink. Although chunking feels to me like drinking beer and for some reason, fast.... So when you learned to chunk, sounded like you learned to drink 🙂

PS. Wore my new fidderman hat and quite a few peeps commented on the awesome vids and website!

Thanks for advertising!  Sounds like you still had a great time despite being slightly intimidated.  Do you wish to partake in the event again? Any plans? Did Lorna enjoy it as well? Did it help to have her with you?

Yes, it's way more fun with Lorna, she plays by ear, and I play by sheet music so we kinda work together on stuff...we were in different groups sometimes, so made more friends and trying to set up a few nights through the summer - couple of the younger folk were eager to help us out... 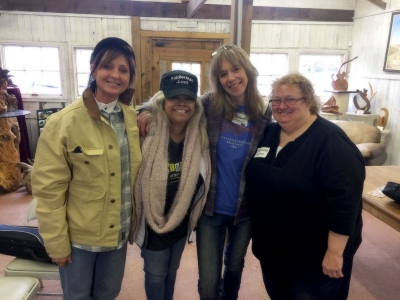 Heres a quick pic - the lady on far right was a teacher allocated to us for a couple of privates to get us up and going, poor thing!

Apparently Joey McKenzie puts on this camp every year, his wife and him both teach, but Lorna and I are apparently unteachable!!!!...just joking...we are trying so hard!

We going to find some more camps/jams in the area....and trying to learn a few basic songs that we can run through. Everyone was so nice, they really spent time giving us tips and such.

Looks like a fun group. 🙂
Especially the gal with the Fiddlerman cap. 😉

Thanks for the picture

Looks like fun, @Mimi Aysha . It's really great that you can go to the camp with a friend.

I was curious about the camp and the genre(s) taught there, so I googled Joey McKenzie. Is this him?

If so, looks like his genre is Western Swing. Can't say that I know much about the genre, nor have I played it. I'm more familiar with bluegrass and old time music.

When it comes to fiddle tunes (i.e. instrumental tunes) in both bluegrass and old time, you really need to learn and memorize the tune. It's especially important in old time to play the tune the way that everyone else plays it because everyone plays the melody at the same time. In bluegrass, you can vary (somewhat) how you play it, improvising a little when you want or need to, because players typically take turns playing the melody, while everyone else plays rhythm.

I've always been a big proponent of learning to read music (standard notation, not tablature). But, now, after four years of getting more and more involved in bluegrass, I'm an even bigger proponent of ALSO being able to play by ear. A well-rounded musician should be able to do both, IMHO.

I think that sheet music plays an important role in situations like orchestral music, to ensure that all those musicians play what they're supposed to play.

But, I also think that you will become way more comfortable and confident on your instrument if you can play by ear and feel, rather than just reproducing what you're looking at on paper.

To me, it's like the difference between reading a newspaper article aloud and having a conversation with someone on the same topic.

Yes it is, Him and his wife teach there, seem like super nice people.

My friend plays by ear, but I am reliant on sheet music, and it holds me back for sure on stuff like this. I have gotten a couple of easy ones down, but Oh boy - some of the fast ones seem impossible to me!

Lorna and I help each other out, when we have the music I play the notes for her, and when we don't she figures it out and I copy her. We also trying instruction videos online, which I do tend to remember better than starting with sheet music (think it's just a mental block knowing I can peek before the next note)

I'm running off to look up pentatonic !!!! thank you so much for the tips.

Sounds like you two compliment each other well Mimi.

Hey folks. I’m a new member. And if you didn’t see my bio, I’m a beginner violinist.

I do have some observations.  I apologize if I am off topic.

I think that sheet music plays an important role in situations like orchestral music, to ensure that all those musicians play what they're supposed to play.

But, I also think that you will become way more comfortable and confident on your instrument if you can play by ear and feel, rather than just reproducing what you're looking at on paper

I do agree with this.  Sheet music is more than just notes on a page.  It also describes the thematic prose, phrasing, tempo, and general feeling of the piece.

But the ear cannot be understated in how vital it is to how we respond to and interpret the music on the page.  The ear tells us everything.  We cannot even approach good intonation without our ear.  I don’t mean to be redundant and obvious, but I do believe very much we need both the music and our ear.  They compliment each other and work together.

Absolutely. Playing from the soul whether you are using sheet music or playing by ear is the color in the painting. I would go one step further pchoppin when addressing sheet music. We need to read the music and use more phrasing, dynamics, articulation than what is notated. Also, we don't need to do exactly what everyone else is doing as that can be less exciting.