Back in January, I ordered myself a tuning fork.  It was partially to get myself some small "treat" as a memento of having passed a music course I took, and partially to find out if the cheapest tuning fork I could find on Amazon was at all worth the bother of owning.

And so, all the way direct from China.. at an impressive price of $2.82 USD with free shipping.. 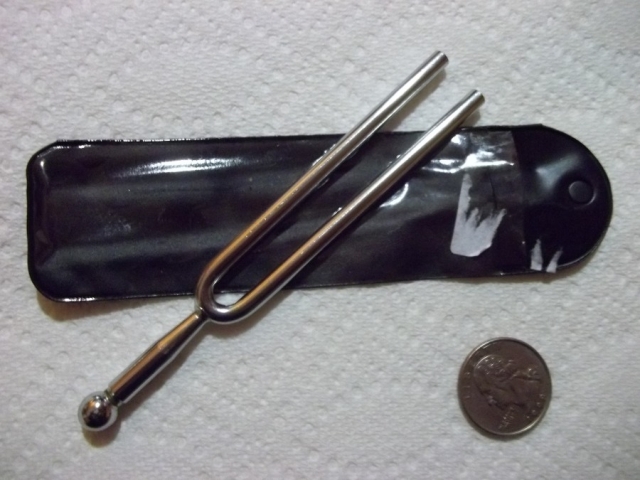 It got here in one piece.  It is metal.  It will fit in my violin's accessory compartment.

You hear people saying over and over "You get what you pay for!"  And so I'd been kind of curious just how bad the cheapest tuning fork I could find (brand new) might be.  Not all that bad.  At under 3$, you can't really expect laboratory grade precision, and for most cases it isn't really needed anyway.  One Hz off is still close enough to be useful in a pinch, or if one just prefers sometimes to tune from an acoustic pitch source rather than a fancy digital gadget.  (For the "cents" folks, that would be about 4 cents sharp.)

Electronic tuners are often off by that much (some of the ones from years ago were even worse) and even computer soundcards sold for home use won't usually be exactly perfect.

I was actually kind of surprised that a tuning fork this cheap was even close.  But today's manufacturing methods, and as simple as tuning forks are, the .1 mm or so it would take to be that close wouldn't be unusual anymore.

So if you've ever thought about getting a tuning fork, but thought maybe you should wait until you could afford a really good one?  The difference probably isn't enough to worry about.  Especially not if you or anyone you play with are the sorts who smack the thing on the edge of the table to make it ring.. LOL  Not even the good ones will be exact for long with that sort of treatment.

So anyway, less than 3$ USD, good enough to at least be useful now and then, I'll give it 4 stars.

Happy for you.  Both for the fork and finishing the course.  Happiness need not come with the price tag of a Tesla.  But school me, how are you to get the fork to ring?  I've obviously never used one and after the many, many, many, many HOURS of waiting for guitar players to get tuned, I think the little digital tuners are the cat's meow.

I was taught to either pinch the tines of the fork with one hand while pulling it away with the other hand, or to rap it lightly on a knuckle.  Banging it on the edge of a table (or worse an instrument) is not the way to treat a tuning standard.

The modern little digital tuners *are* the cat's meow for sessions and most occasions.  I used to get so sick of how long it took some players I played with to tune up that I'd just tune everything before they got there.  The downside to that is that most of them are fine with just letting you do that, and so they don't get any better at it.

But I do feel tuning forks have their place as at least a "batteries not required" backup, and it is good to be able to manage without gadgets, in case you ever need to.

I once tuned a double keyboard organ without a tuner.  I just listened to a country radio station and figured most songs were done in e flat picked the tone and started turning screws.  I couldn't hear what you hear for tuning.  I just listened for the fast wavers as sharps and the slow wavers as flats.  It was a learning adventure I don't want to repeat.  But a tuning fork at that time would have been priceless.

Over 440 is not a problem. I'd say you got a steel.
Most professionals tune over 440. I tune quickly and without aide of any instruments and am always over. In most orchestras they tune to at least 442.

At the price, it's excellent.  I tend to tune every instrument the house the same so any of them can work together, but if I played just one instrument, it probably wouldn't be something I'd fuss as much about.

For recording, it is good for everything to be consistent.  But live performance is less critical.  It would certainly be close enough for that.

Besides, there is something that tuning forks can do that the electronic tuners really can't.  Checking for ear infections.  LOL

Between that and being a backup tuning standard, it was well worth the few bucks and def deserves a place in the accessory compartment.