Thomas' Audition - He Made it

Thomas' Audition - He Made it
Thomas has been working so hard for his audition tonight and here is the result.

Here is a picture of Thomas and I directly after his audition. He was one out of about 8 who auditioned for the spot they had open. The other kids audtioning were between 13-16...now mind you he is only 10. So anyway, after his audition tonight at 4:30, he said he thought he did well. He played his piece without an issue, he played scales and arppegios, played a surprise piece the conductor chose for him and after all was said and done, they told us they would email us their decision tonight. No smiles or any hint at what they thought. So we just got home and here is the email that was waiting for us.

" Thomas, Congratulations and welcome to the Bangor Symphony Youth Orchestras' Prelude String Orchestra! I will be in touch early next week with more details about our first rehearsal on January 20th." 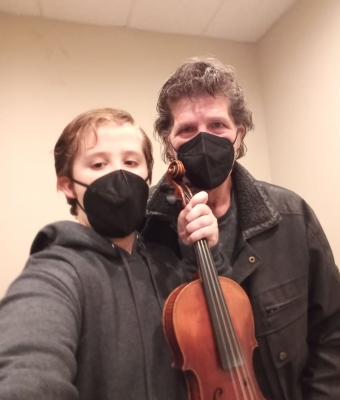 He worked so hard and he is sooo happy.

I cant imagine what those snobby judges were thinking while we were warming up in our room. He was nonstop playing fiddling tunes that you would not catch those stuffy violinists playing, or admitting to playing. But that is what relaxed him, got him a little less nervous and besides ...he loves that music and it warmed him up good enough to snap the only spot they had open,,hahahaha.

Whoops, sorry about that. I really am getting the hang of this, a little slow, but getting there.

Although I congratulated him on the other thread, it deserves a second "WAY TO GO, THOMAS!!!!" Congratulations to a young artist!