There are many types of musical ornaments: turns, mordents trills ….. 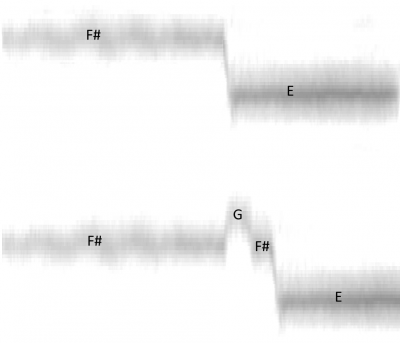 I can’t find a name or symbol for the one in the picture.

This is from Ashokan Farewell played by Jay Ungar

playing F# and a very short G and F# before he play E.

and created my own symbol for this. I have searched everywhere and can’t

Its called a cut its used in Irish music all the time as an onament for the folowing note, its supposed to imitate the sound a piper would make.Thats if I understand your question correctly🤓

possibly a triplet.  hard to say without hearing that exact spot in the recording.  for me anyway.

Hanneke Cassel says it is a Scottish Gracenote called "The Waterfall".

Similar to a "Flick" but you end on the next lower note.

She describes a "Cut" (in a different video) as a somewhat crashing bowed triplet - you end on the same note you started on.

yeah i think its that or triplet..not to be confused with a bowed triplet which is more percussive.  it would help to hear what part of the tune this is taken from though.  there are some grace notes here and there he plays from what i remember.

cut is what is used at the end of a bowed triplet. or as an ornament for the following note. I was told this  by the guy on the other forum who is  teacher of music at university in the usa he was taught fiddle by Kevin Burke. so I assumed he was correct but maybe I misunderstood his explanation. He said a cut is a very fast movement were the string is touched but not pressed down completely and then released so it gives a popping sound, and imitates the sound pipers make, It can be used in between notes or as at the end of a roll, maybe fiddlerman could give his take on his? it would be interesting to hear what he thinks. like I said I may have misunderstood him in his explanation as without actually being shown physically its sometimes difficult to grasp what is meant in words.

I added a mp3 file from Ashokan Farewell

You can hear the ornament after 4 sec and again just after 10 sec.

Like a "Flick" where you end on the next lower note.

@stringy  i believe you are correct in that the naming is different.  I wouldnt consider Ashokan Irish or Scottish but a case for each of the ornaments described in the topic could be made.  On Jay and Molly website a copy of the Ashokan Farewell sheet music as played by them can be purchased with all the ornaments notated, if the violin lead sheet is like the guitar sheet I purchased once.

Just interested in the regional variations Greg, naming and such. same as with actual playing of tunes in Ireland in which they have differences to how something is played depending which county you are from.

Never tried Ashokan farwell may give it a go,but at the moment I am up to my ears in the mozart night music one, great for learning intonation as well as a fair bit of shifting and third position. I have played it all the way through a few times but at the moment it sounds like a cat screaming in pain lol.

I havent really attempted any classical.  I WISH I wouldve picked this instrument up when I was many years younger and had several in classical.  and then moved over to the trad stuff.  BUT..didnt happen.  Ive been to the symphony here locally and it was amazing.  Felt like I could reach out and touch the individual notes being played.  everything was perfect.  Even the hall, which was built for the city orchestra.

As far as the topic, it seems to me that the Scottish music notation is more specific about how things get notated, as far as ornaments.  Alot of the Irish and American old time may not even notate ornaments, its just left up to the fiddler how and what/when ornaments are played.  my observations...not facts.

I went with a Scottish term because Ashokan is written in the style of a Scottish Lament.  Unger describes his tune as a "a Scottish lament written by a Jewish guy from the Bronx."

Seems Folk music, in general, is notorious for using regionally different terms for techniques AND titles for tunes.  Even Classical music notation has multiple different terms for many things!  This is understandable for use in the past, but with the current global state of "high speed" communication it would really be nice to have consensus across the board.  I won't hold my breath. (lol)

...just a note, everywhere I've searched describes a "cut" as only 2 different notes, 1 gracenote followed by whatever note it lands on - never more.  Am I missing something?  The example in the 1st post of this thread is of 2 gracenotes (not 1) falling onto a lower note - so more than a cut, but less than a roll... "The Waterfall".

LMAO!  I watched a Kevin Burke video where he won't say the word "cut" anywhere in it, but calls ALL gracenotes (including the ones in rolls) "interruptions"!

FINALLY!  The sun hasn't been out here for 2 weeks (maybe more, not really counting) - was starting to feel like I should just go into hibernation.

Wishing a bit of sunshine for ALL of you!

Interruptions is probably a better way of putting it, like I said to Greg i have heard Irish players, play tunes differently every time they do them. personally I think getting the feel across is more important than anything, and the 'interuptions,,' play a huge part in the general feel of a tune.

I have been told recently to stop reading the music for fiddle tunes altogether as even though I was improving I was becoming robotic, advice was to learn all fiddle tunes by ear and put my own interpretation into them, not meaning change them completely but put my own stamp on them, same person said classical players dont make good fiddle players as they are too rigid, sticking to the rules. Dont know if thats true or not.

Apparently if there are two cuts before the note its called a pat.

By the way whats the sun? I thought it was a myth, very occasionally I see a massive golden orb in the sky and fall down worshipping it, as does everyone else who lives in the north of England, is that it?🌞😁

Im gonna go with a cut as just tapping the string above the melody note to make a percussive type interruption of the note.   I havent really done much on the Scottish side so would probably have to change the definition when playing those tunes.  I feel being able to read music and learn by ear is best of both worlds.  Kevin Burke, since we mention his name alot, studied classical before/during his Irish stuff.  Pretty sure if someone can play those pieces they could pickup on the folk stuff if they wanted.  Again an opinion...I havent been around classical players trying to break into the trad scene...as far as I know.  With the internet now its wide open on whats out there to learn.  I cant imagine not having it as an aide.  In a few seconds most tunes are at our fingertips..no pun intended.