Shuffle dynamics
A video of getting some dynamics out of shuffles

So I was discussing shuffles on another forum and thought that someone here might like some of the ideas. If you aren't familiar with a shuffle check out this video she has a great video on it (I looked to see if Pierre had one, but didn't see one so I apologize if he does have one):

So shuffles are a great way to add some "fiddly" style to a song. But if you are playing them as a doublestop (which makes them sound even more fiddly) they can get kinda loud. So I wanted to do a little video on how much dynamics I can get out of those shufles.

3. Play a single string but on part of the shuffle hit the double stop again

4. Change which string you are playing on, an E string is going to be shriller and cut through more (louder) than playing on the G string.

Lastly if you at all like Cajun music, here's a great example of a song that is pretty much all shuffles.

Thanks for posting this @fiddlinsteudel ! I've been wanting to get more of a fiddly sound, so I will start by working on shuffles!

I agree.  Great post.  I was eager to try some of this.. "the correct way" I was unknowingly doing some shuffle bowing in my work from how I was "hearing" some of the fiddle tunes sound.  Now I have a base and something to work with.

I saw some of these videos in the past but I was never going to play fiddle tunes so I didn't pay attention.  Now I am able to absorb the instructional videos a bit better.. month by month.

There's lots of different types of shuffles so if you learn the Nashville check out the Georgia Shuffle next.

That is my plan.. I am going to work on Nashville for a while.. but yes!! Love the shuffling stuff... I think it is good bowing practice for me.. well any bowing practice is good for me.

If ya can, posts some progress videos/audio clips as you go along. It's always fun to see/hear people improve.

Hey.. Okay.. not a bad Idea.  If I get my nerve up to post any videos.. I will share. It is good for feedback and it is good way to remind myself to practice it. If I am thinking .. "oh I am going to post."  Not a bad Idea at all ... you know post a "technique"
and then we all post our attempts and subsequent practice sections.

@fiddlinsteudel  Thank you for posting this video.

I had been trying to figure how to add the different shuffles to a song that was not written with the shuffle in it.  I think I might have just gotten it.  Or maybe no, for example - can the shuffle be used to play Ode to Joy or Simple Gifts or Morning Has Broken?

Off the top of my head:

I can hear it in Ode to Joy and Simple Gifts

I can't quite hear it in my head on Morning has broken would have to break out  a fiddle and play around with it.

Mark I just saw this thead! Very cool videos and thanks for posting!

The onyl shuffle I still kinda struggle with a bit is the so called "Georgia Shuffle" that' s similar to the Nashville in a few respects, but subtly different. IMHO, I think it's more difficult to play than the "Nashville Shuffle" ( aka: "simple shuffle" ) at least when adding a series of notes like a scale or keeping it constant..

The Nashville - a series of eighth notes and a quarter on alternating up and down bows starting on the quarter ( no slurring ) ie: Duh "duh-duh" Duh "duh- duh" Duh....etc

At least, this is the way these shuffles were taught to me... There are other combinations of shuffles  ( Like "Hokum Bowing" aka: "The Orange Blossom Special Shuffle" ) but these 2 seem to be the most prominent.

I had NO idea what these shuffles were called until I got into fiddling. Besides that, alost of Bluegrass is just up and down stroken in quick series, either slurred or not.

For me, the Ga shuffle is a tough nut to crack for me personally. I can get it going good but after a while I start to lose it or fumble it. I'm a downbower but I like to put the "quarter" not on the downbow, so the slurred triplet is an upbow. I can do a series of notes with this shuffle on one string but as soon as I have to cross strings or added a meldoy...LOL...I can only keep it going for so long. It's probably exposing the fact that I need to work more still on my wrist looseness LOL.

Either way, my Fiddle instructor told me that since I've at least got the "nashville" down to put the shuffles on the shelf for a while. As a matter of fact, he said he thought alot of my playing was "too" shuffly and said I had a tendency to try and shuffle too much.

He wants me to focus on straight up and down strokes, stacatto or slurred and just practice "kickoffs" to songs and/or breaks from different tunes in different keys up and down the neck and practice arpeggios as well. He said later we'll come back to working on shuffles lol.

However, once you start getting into learning fiddle tunes, these shuffles are a big deal, especially in Bluegrass or Old-Time.

Mark, do you find the Georgia Shuffle easy to play? I'm curious how you practice it?

@fiddlinsteudel OK!!  Now I am confused!!  So I remembered this thread this morning after trying to redo my Push the Pig's Foot in a little further into the Fire.

I found these 2 examples for each Georgia and Nashville.  The top in notation with slurs and bottom UD stuff the shuffles.  SO how confused am I?  See even the person labeling the notation swithced from shuffle to bow!!

Hey thanks!! I have Suzuki Teach, Jam Teach and now steudel Teach!! 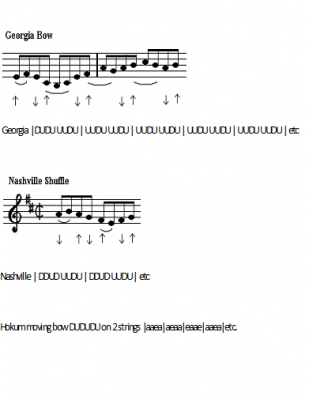 Schaick said
@fiddlinsteudel OK!!  Now I am confused!!  So I remembered this thread this morning after trying to redo my Push the Pig's Foot in a little further into the Fire.

I found these 2 examples for each Georgia and Nashville.  The top in notation with slurs and bottom UD stuff the shuffles.  SO how confused am I?  See even the person labeling the notation swithced from shuffle to bow!!

Hey thanks!! I have Suzuki Teach, Jam Teach and now steudel Teach!!

The Georgia Shuffle is a little harder than the "Nashville or "Simple" shuffle as some fiddlers call it. I'd personally learn the "NS" first before the "GS" which is a bit trickier:

The Georgia Shuffle practice it like this NOTE: You'll need a very loose wrist on your bowing arm to do this smoothly so start it out slowly

a kinda snappy quarter followed by a slurred triplet... It's similar to the rythym in a bluegrass band where the "DUH" would be the off beat "chop" the Mandolin plays in the rythym section..

I'd practice the shuffle first on a simple doublestop or single string. Then once it's smooth enough, try and add it to the fiddle tune. The trick is playing this smoothly from string to string ( string crossing ) and hitting all of the notes in the melody without breaking the stride of the shuffle...

NOTE - The Georgia shuffle is great for playing fiddle tunes quickly, just the flick of the wrist is necessary for the snappy quarter note...., it's less work than the Nashville Shuffle. Bluegrass fiddlers will use it alot in fiddle tunes like "Uncle Pen" or "Sally Goodin" or "Katy Hill"

"Georgia Shuffle" can either be started on a down bow or an UP bow although MOST fiddlers will prefer downbow....but try both and see which fits best. However "Nashville SHuffle" you'd want to start than generally on a downbow...it's more powerful and driving that way.

Fast forward to 5:40 and you'll see him do a demo of the "Georgia Shuffle" when he plays....see the aggressive offbeat that the snappy quarter adds to the shuffle? "GS" is really powerful when played well

I'm not exactly sure which part of the video youare talking about, but if it's the "Scrub the dirty dog" (or whatever she called it). The long scrub, is the slur, the little scrubs are single notes.

I don't practice shuffles, but sometimes they just appear in my bowing. The common place is when you have repeating 4 note phrases often arpeggios. I find I prefer doing a strong downbeat and then do the slur on an upbow, but I do both. Here's a video of what I'm talking about (more like babbling about)

The only shuffle I really really practiced was the "georgia shuffle" and there are a few more eventually I'm going to have to learn. However, the "nashville shuffle" I didn't really practice...it just literally came automatic, because it's so, I dunno common and spontaneous with so much fiddling....with alot of folks, it get's picked up really quick. Especially if you know the music and have alot of it internalized...it just comes out.

Nowadays I really don't pay as much attention to shuffles, just depends on the tune. Maybe some parts here and there but I got to where I wasd "shuffle obsessed" to where I subconciously played everything with a shuffle. My fiddle teacher has helped me make great strides with that though.

fiddlinsteudel said
BTW Eric isn't' 5:40 the end of the song?

By the way...that's HARD what you're doing there with that Georgia Shuffle on that lick B lick of Big Sandy. Crossing the strings with that bow rocking as you play the georgia shuffle...sounds ohh soo cool...but I'd have to REALLY practice that hard to get it!

But you can hear where you've added the shuffle, especially when you rock the bow...verry cool...I wanna play stuff like that one day