A 1$ condenser mic for violin

A 1$ condenser mic for violin

If anyone maybe found my post about making a 2$ piezo pickup a bit too complicated (or expensive) to try, there are also condenser mics.  Even easier with than trip to the dollar store and it only takes one item.  Just the earpiece/microphone thing like the one we cut up to make the piezo rig.

To see how well it works, I took one and just taped it to my violin with some blue painters' masking tape.  I used a bit of folded paper towel to pad it so it wouldn't have any hard part touching the violin top that could result in vibration/buzz. 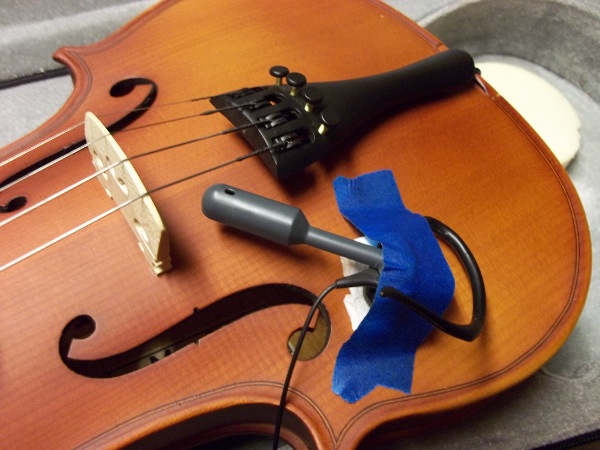 Again, I just sort of copied the approximate position of small condenser mics mounted directly on the violin that I have seen in ads.

So how does it sound?

I'd say it is ok.  Not great, to my ears.  Certainly better than nothing though, if you want to record and didn't have or couldn't afford better options.  Again, some work with eq and effects could help it quite a bit, but I was just showing another "rough and ready" sort of option.

It could still sound better even without any adjustment than some webcam microphones, and could reduce noise by allowing the player to be further from the computer's fans.

These are great ideas Daniel. Now we need a schematic for a small preamp and amp.  I am thinking of making a solid body violin with a preamp and amp and small speaker built in.

For that concept, Kevin, the piezo pickup would probably work better.  This one here relies on the computer soundcard to supply the teeny bit of power that the condenser mic needs to work.  But something like the tiny battery out of a dollar store wristwatch could do that.

I haven't tried the circuit Oz posted for the piezo, but from what I gather it is intended to drive a little speaker and it has both preamp and "power amp" stages, so that might be all you'd need to get your concept working, right there.

This is just an even simpler and cheaper way to get a signal from a violin into a computer soundcard so a person can quit wishing and start recording.  I would say the main advantage to it is that it actually will pick up the acoustic sound of an acoustic violin rather than making it sound like a sort of electric.  The drawback would be that it would feed back easier if one used it to amplify a violin for performance.  But that isn't an issue if one is just recording.

Again, there are a LOT of ways this could be improved.  Use an old chinrest clamp to hold a little block of wood on the rim of the violin and mount the microphone to the block of wood with something like a little gooseneck or even a piece of stiff wire, and secure the cable to the block of wood to keep it out of the way and it would start to approach the same principles used in some violin mics that cost a whole lot more.

But just to try it out, a cheapo computer earpiece/mic from the dollar store and a bit of tape is conveniently "entry level".

This is similar to the setup I have. I broke the boom mic off a headset I had and soldered a 15ft lead to it for so I can have plenty of freedom. I have my mic placed behind the bridge under the strings and seem to get a decent recording that way. Though Im sure a higher quality mic would help.

I use a program called SmartMusic that requires a mic. The program asses you intonation and timing while you follow the sheet music. Quite a nice little program. 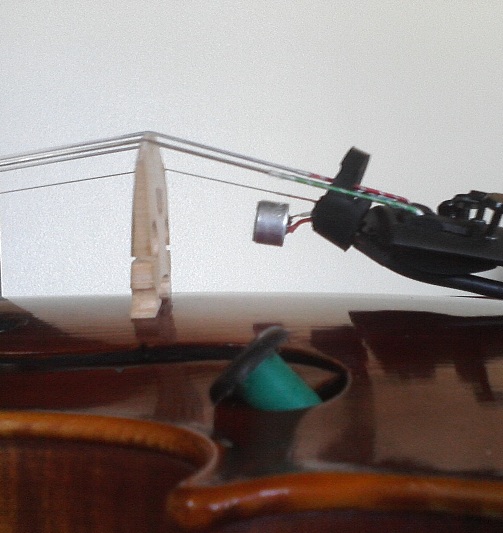 A hoopy frood always knows where his towel is!

Good point, peanut_gallery.  A mic or other way of getting signal into the soundcard does allow some interesting educational software to be used, not just recording.  Also some interesting utilities like Scolily which can take sounds played into the computer and turn them into a written score, and some software synthesizers so that you play a note on guitar or violin or whatever and it can come out sounding like a horn or xylophone or whatever.

peanut_gallery, your mic sounds REAL good, and maybe the fiddle too

Thanks for all the great posts guys.

I've never mic'd an instrument before and its good to know that its a pretty decent setup.  Now I just need to get over my bouncing bow syndrome I've had lately.

Been loving the Concert Master, Fiddlerman. The sound is soooo much better then the rental I had. Can't help but to pick it up and dink around for a few minutes throughout the day.

This is the head set I got the mic from: Headset

The part holding the mic to the strings is a Tourte 2 string mute that I melted a hole to hold the boom part of the mic.

A hoopy frood always knows where his towel is!