Fiddlerman Artist Violin
What $499 buys you at Fiddlershop (in addition to the case, bow & accessories, of course)

You think so? I thought the one on the site looked a lot lighter. (when I opened it I thought for a second they shipped me an Apprentice :P). Maybe it's the whole "Artist" branding: They all look different. Classic middle child lol. But they all seem to have the sort of high arches and narrow waist like a Lord Wilton, and sound really nice. Good luck with yours.

You actually guessed right when you said they all look different. That was the thought behind the "Artist" name. We want you and every single customer to be happy so please remember that you have a 100% satisfaction guarantee. If you are not happy with this instrument please don't hesitate to contact us.
Hope all is well and I look forward to hearing you play it one day.

You have probably noticed the badges that many players have on their profiles!

). The odd features give it character, and I certainly have no intention to return it.

And I tried doing a recording but any marginal skills I may have froze like the Weeping Angels in front of a mic. Maybe with time.

So, written review it is for now and for any interested:

Having played on it every day for a few weeks now, I can say my favorite quality at this stage of progress is unlike other student violins, it doesn't punish too harshly for bad behavior, but rather rewards for good. I started on a Cecilio and it was fine if you were really on point, but just starting out you're almost never really on point, so most of the time it was just bad sounds chasing mediocre sounds. After weeks, the lack of reward structure and low ceiling became frustrating.

With the Artist/FM carbon bow though it's difficult to get a really heinous "I'm clearly new to this whole arco/unfretted business" kind of sound, but when you hit it just right there's plenty of reward to motivate. The whole thing just gets the shakes and goes "yes, more of that please"; like it was built well to be played on well, but will suffer a novice if it must. Never got that from the Cecilio, which had a stiff bow, three-lane unfitted bridge and double stuf varnish job.

It's hard to explain but upgrading to this has been like falling into a pit of easily attained skills I couldn't have developed on the Cecilio. For those of you familiar with Zelda, it's like walking into the pot room after throwing rocks for weeks.

Now to start a separate savings account for that Holstein Lord Wilton, for which I am also

. I mean just, ugh, with that thing. I know I have some spare organs around here somewhere...

I love it. Thanks so much

Hey everyone! I'm new to this forum, this is my first post. I'm also new to violin and am currently looking into getting my very first violin. I eventually found my way to Fiddlerman and Fiddlershop, glad I did, seems like a very friendly place

So, I've become quite interested in maybe getting either the Fiddlerman Artist violin or the Concert violin. The Concert has a lot of reviews while the Artist hasn't got that many yet, this is because the Artist is a much newer violin than the Concert John at Fiddlershop told me.

So I wanted to ask you, the owners of the Artist violin, now when you've had it for some time - what do you think of it?

Looking forward to hearing from you!

Hey Mike,
I made a double take when I saw your post.
All my sons friends call him the Swede. His Facebook name is Michael Swede.
Lot's of people call him Mike. On Skype he writes Mike at Fiddlershop.

I'll let the forum members answer your questions but if you decide on an instrument I can play it for you before we ship it.

If you call to make your order you can speak Swedish to my son.

Hey Pierre, or, perhaps I should say "Hej" instead?

Wow, what a surprise! Now I'm curious, how come your son can speak Swedish? Did he study here in Sweden? Can you speak Swedish too? Kanske lite? (maybe a little?) I could never have imagined I would be able to call you guys and place the order in Swedish, haha, awesome

It's a funny coincidence your sons name and nickname are that similar to mine. However, I wouldn't want to let anyone mix your son up with me with this username I've picked now, just let me know and I'll change it.

Pierre, I'd love to hear you play it, and I'd really love to hear what you think about the "Artist" too, especially in comparison with the "Concert" if that would be possible. I have actually already made a search on Youtube to see if you'd perhaps already made a review on the "Artist" as I was (and am) very curious to hear what you have to say about it.

Nice talking to you,

That's so funny that they all look different, I wondered why mine didn't look like any of the others! I originally bought the concert but upgraded to the artist after a couple weeks. The concert was great but I definitely love the artist more! Don't mind the pup in the background. Scarlett is our office pup 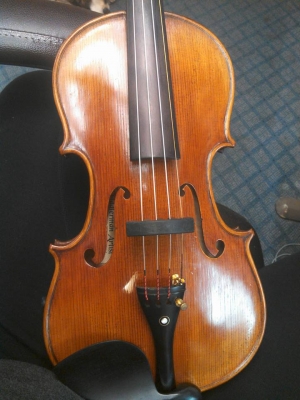 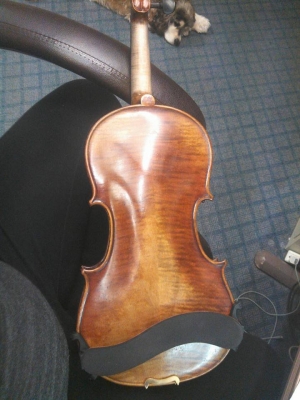 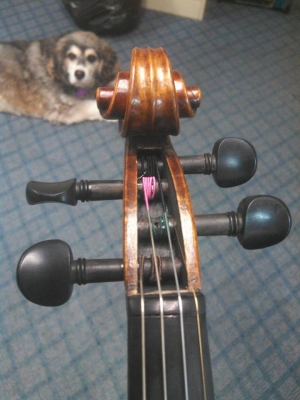 sporkytherobot said
Wow, that is a really nice looking violin. But it looks completely different from mine.

Mine also has a knot, but it's on the back, near the bottom of the violin as you can see in the pic. It looks like a crack but is actually a small knot.

I am curious as to why the 2 violins look so different. Yours more closely resembles what's on the Fiddlershop website. But both violin styles appear in the demo vids on YouTube.

I am new to the site so if I post on someone's site just let me know.  I ordered an Artist Violin this week in the 3/4 size. I am anxious to see if the size helps with my finger placement.

About Christmas 2016 I purchased a Fiddlerman Artist for my wife.  She hadn't played since college, but wanted to start playing again.  With the help of the Fiddlerman team, we found something that fit her expectations.  She wanted something with some reddish coloring, and a darker tone.

My wife loved it and has begun practicing, and I have even given it a try and will probably get a Tower Strings Midnight to learn on.

I broke the E-String while tuning at Christmas (was turning the A while listening to E) have since replaced the E and A with Obligato, which my wife likes better than the original strings. 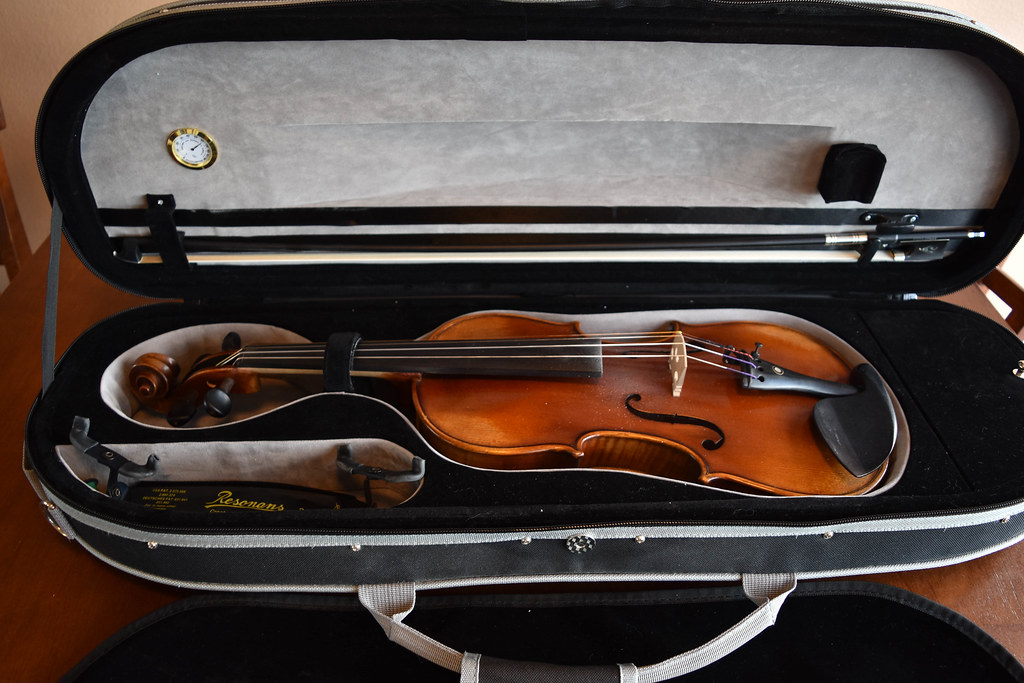 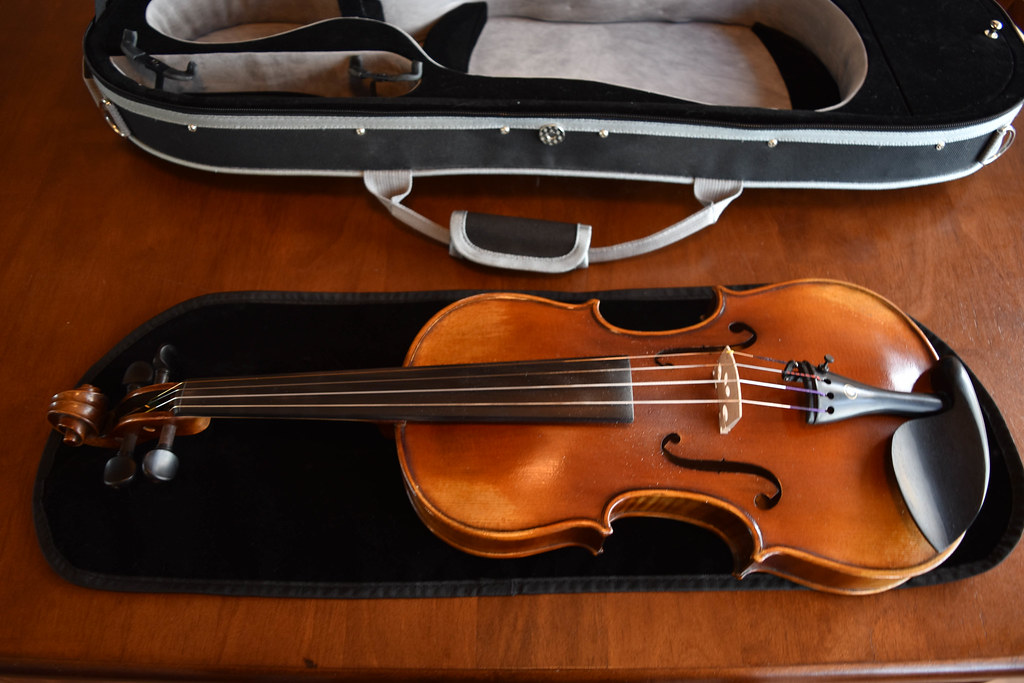 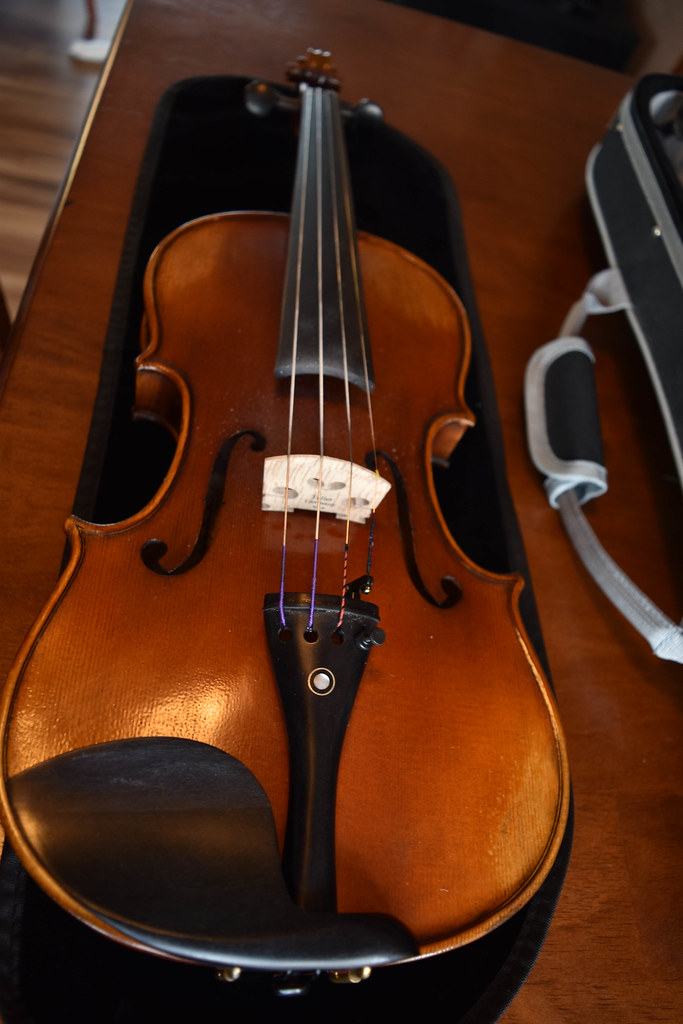 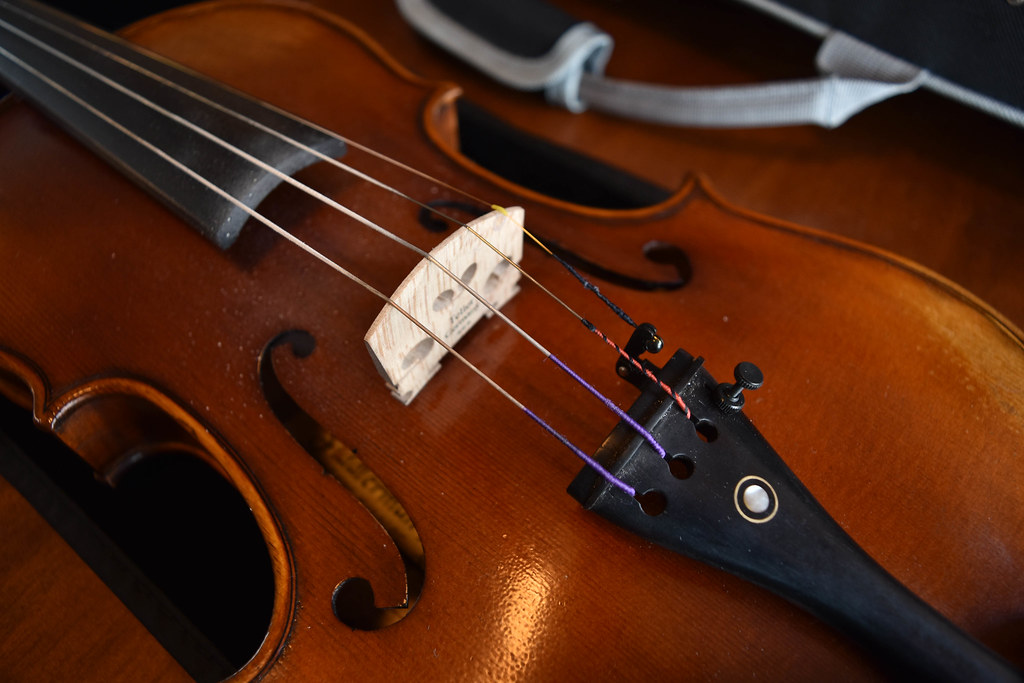 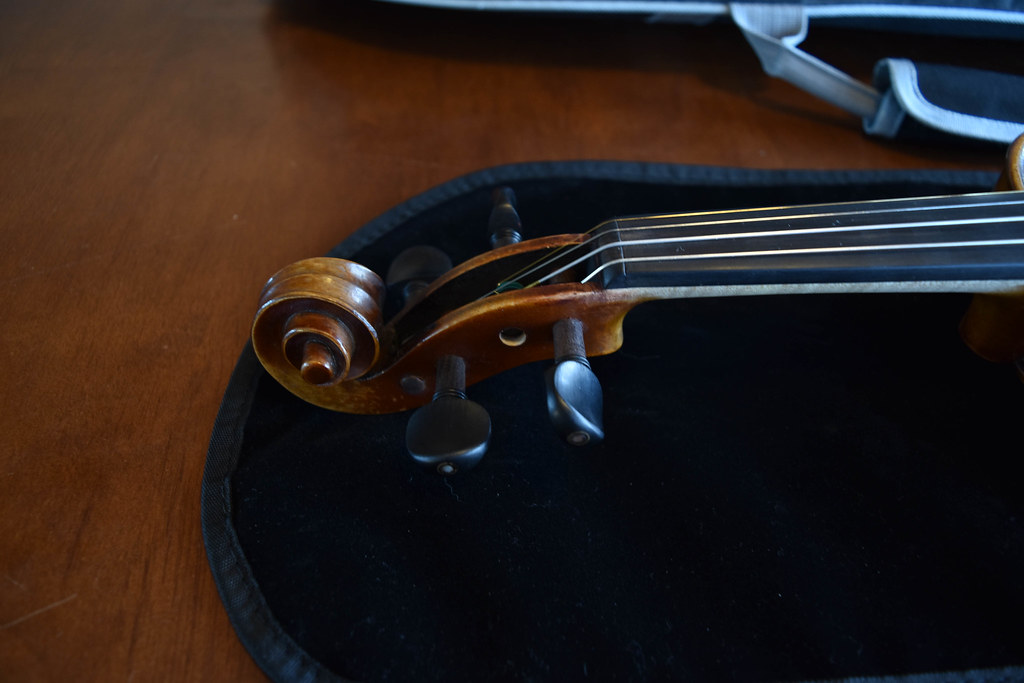 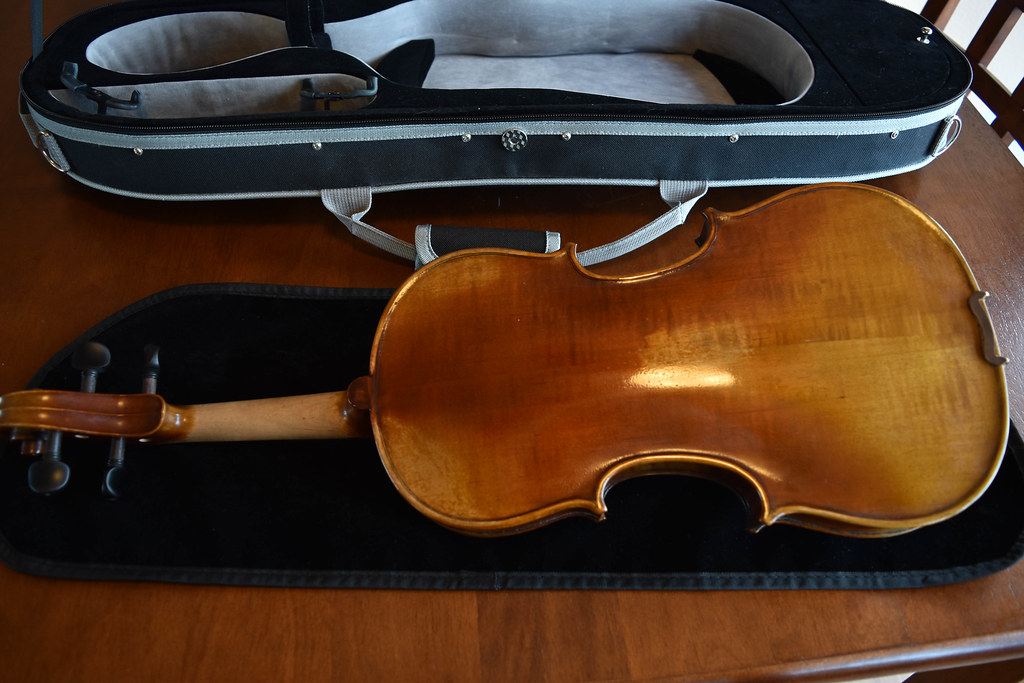 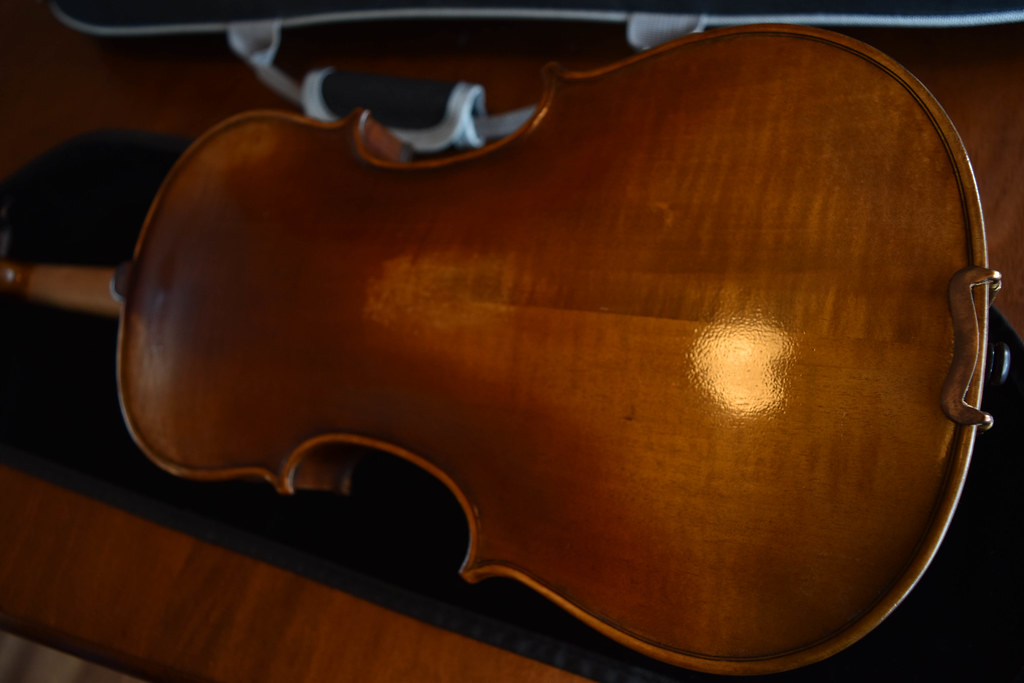 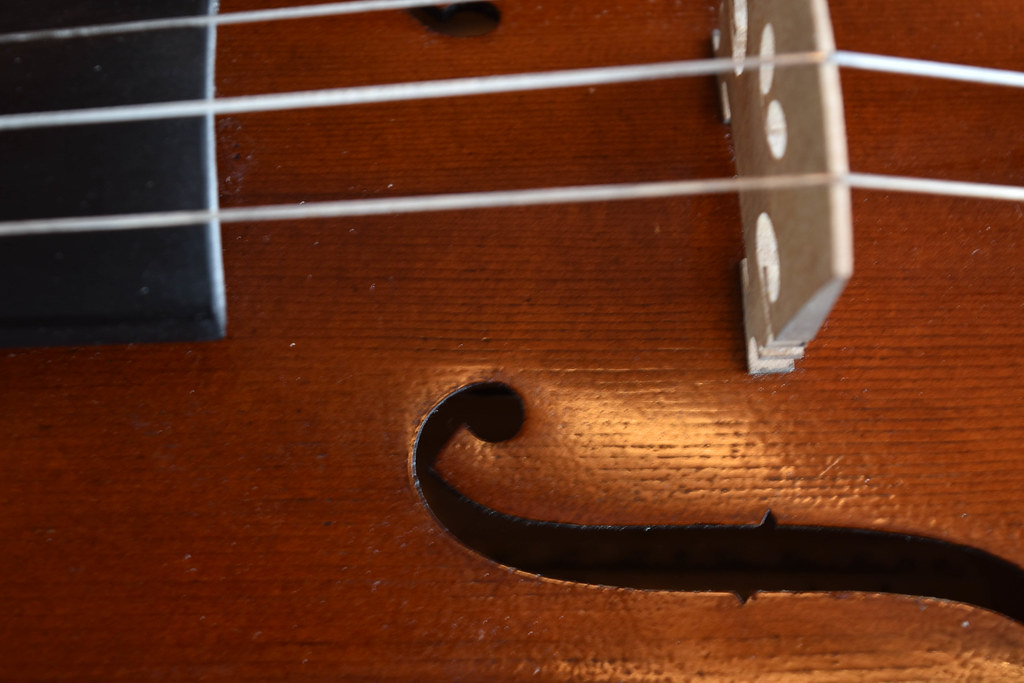 And me practicing Open strings.

I recommend the Tower Strings Entertainer over the Tower Strings Midnight for sound. https://fiddlershop.com/tower-.....lin-outfit
Whenever a violin is painted with a solid color it tends to dampen the sound plus the better quality wood is reserved for varnished violins over solidly painted instruments.

Thank you for the suggestion.  Will be sending an email soon to start the process.  Would like to make a purchase in 2 weeks.

We are ready whenever you are.