I wanted to do a quick review and comparison on the Holstein Premium Rosin. I am a self professed rosin addict. I love trying all sorts of rosins even though I'm barely out of beginner stages. I find the differences and subtlties fun to play around with and find the best one to fit my needs. I am still very much learning the violin and I'm finally moving onto faster fiddle type songs and beginning to learn 3rd and 4th position and working on the dreaded vibrato so take my review in essence of this is my 2 cents as a non-professional violinist. Also I currently live in a cooler climate here in washington state with high humidity so my opinions someday may change if I change climates.

The rosins I have compared this too: Andrea solo, Bakers original, Bakers citron. These were the rosins I had on hand and considering they are some of the most used and talked about I figured I'd add my comparisons.

Price for one full cake of rosin:

My observations of the case and ease of applying rosin to the clean bow:

-Holstein Premium Rosin: Nice magnetic case a little on the large side but over all nicely built. Easy to rotate as I'm rosining the bow and fits in my not so packed compartment.  The rosin is a beautiful Red color. A wide surface area to run the bow over. It applied really easy to clean bow hair. No need to scratch the rosin just a little pressure to get it going and you're all set. Only a few bow strokes needed to get enough rosin on the strings to play without over doing the rosin.

-Bakers (both): Nice small container. Easy to grip lid, though not as easy as Holstein or Andrea and rotate while rosining. Original is an amber color Citron is slightly lighter. Smaller surface area to run bow over but didn't hinder the application.  Applied easily to clean bow hair. No need to scratch rosin very little pressure needed for it to start adhering to bow. Very little rosin needed on bow to start playing. Fits in compartment easily

-Andrea Solo: Small container with an easy to grip lid. A bit wider surface area similar, to Holstein but bigger then Bakers. A darker red color rosin.  Again only a few swipes along the bow hair for a good application of rosin. No need to scratch the surface of the rosin to get it to apply to clean bow hair. Fits in compartment easily.

Playing on the strings:

-Holstein Premium Rosin: I applied a tad to much rosin to start which was surprising since I only did about 6 swipes back and fourth on a clean bow. Once the excess was played off there was very little dust just a slight residue on the strings. The grip on the strings was very nice. It was easy to manipulate the sound I needed with more or less pressure. Very easy rosin to play with excellent string response to light and hard pressure on the bow. Rosin seems to last quite a while before needing to reapply

-Bakers Original rosin: Very low dust. Very good grip on strings. The string response was excellent and very little rosin was on the strings besides normal residue. Worked well with both light and hard pressure on the bow. Not dusty at all. Lasts a good while before needing to reapply

Bakers Citron rosin: Very low dust but it has less grip then the other rosins tried. I personally prefer a more "dark" grippy rosins. Citron is not my preferred rosin as it was closer to light or "amber" style rosins. however still a great quality. good string response though had to work a tad harder to get the same sound as other rosins. a more "bright" or smooth sound then other rosins. Only slight residue on the strings from playing. Not dusty at all.  Didn't play long enough to know how long it lasts before needing to reapply

Andrea solo: Not much dust but more slightly more dust then the above rosins. It had good grip when pulled along the strings, maybe a tad more then Holstein and bakers citron and about the same as bakers original. Over all it had great string response and ease of playing as it did well with both light and hard pressure but I prefer the lower dust of the above rosins. There was some more resonance with this rosin then the others. Not much more but it did add a bit more "sing" to the strings under ear if that makes sense. Its possibly due to it being a dark rosin with a tad more grab too. Lasts a long while before needing to reapply.

I think the Holstein Premium Rosin is up there with the greats. Playing it with the top talked about rosins I found that it surpassed my cake of Andrea Solo in dust and pretty much equaled it in the ability to play with possibly a tiny bit less grip but nothing worth nit picking over. Holstein rosin equaled the grip of the fresh Bakers original rosin and beat out the Citron.

I tend to lean towards Bakers original rosins as my favorite but I think thats purely because of the long wait line and the philosophy behind the "fresh" made rosin each year.  However comparing it between the Fresh original Bakers and Holstein rosin I say they are damn near equal in playability and it beats out my year old Bakers rosin, as that one tends to be more dusty with a bit less bite as it ages.  Andrea does gets a bit more dusty as it ages over a year old but the playability is about the same a new new. I have yet to try the Holstein rosin for long periods to test if it declines with age However due to the price point it would be just fine having to replace Holstein Rosin yearly compared to Andrea and Bakers.

The ease of playing and string response was nearly identical for all three to me (Except the citron). The Andrea may have been a tad more easy to play, or it could just be the extra bit of resonance/tones coming through that make it seem a tad different. Granted again I'm not a professional and don't do all the crazy bow moves yet, but  I played back and fourth for about 2 hours cleaning my strings between each rosin to gauge an accurate response and I honestly couldn't tell much difference between them, besides the slight bit more resonance from the Andrea.  For a self professed rosin addict I can say Holstein rosin will be in my violin case and as the weather gets cooler here I think it may work even better in the winters then the Bakers I currently use.  Andrea is slightly more superior but it is also twice the cost of Holstein so I think its quite fantastic. I think it's equal to Bakers and I have a feeling its longevity will beat Bakers in the long run as well.

The only Rosin that I didn't like was the Bakers Citron and thats more personal preference as I prefer more bite then it was giving me. Still a great rosin though for those who prefer more "amber" or light rosins.

Edit: Well for the dust on the Andrea apparently I over rosined my bow again, only about 3 or 4 swipes needed to start instead of 6 to 10 similar. I played for about 30 more minuets just with the Andrea and it did disappear and leave only slight residue on the strings. It does seem to play a tad longer then the Bakers or Holstein before needing to reapply but this cake was also more used then the others so that may play into affect as well!

For the pictures before the Green stamp B is Bakers Citron and Red is Bakers original. 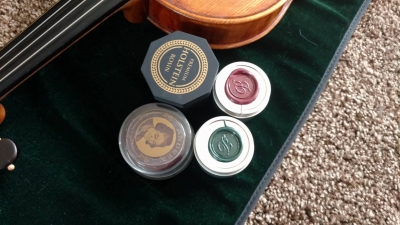 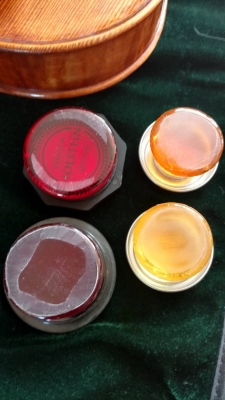 Great write-up. Very well thought out. I am much less analytical in the process of picking a rosin. I had 7 or 8 different rosins that I set in front of me. I used which ever my hand picked up. If any rosin caused me any concern, I packed it away. Using that method I ended up with Andrea and FM left and then put Andrea away. I used no thought about it, its just that FMs rosin allows me to play without thinking about rosin.

Thanks @MrYikes!  I just thought it would be fun to compare it since Pierre was nice enough to send me one to try and I think they always work well to ensure quality. I was so surprised at how well to compared to Bakers and Andrea. The differences I mentioned were really only slight and what I felt that day trialing them. I could feel a tad different today as todays weather and mood are different as well, as well as the genre I'm practicing with may be different too.

Thats the best part of rosins and well violins in general is that each instrument and player/set up are so unique to each person! It's also why I love trying so many different rosins and I've tried probably about 10 or so now and those mentioned above are my top favorites!

I love keeping several different brands or types of rosin around because what I'm feeling one day may not be what I want to play with the next and sometimes mixing them brings about surprising results!

Anywho I had fun doing it

Yep. I played around trying to find a good cello rosin. I first put on Sherman's bass rosin and then put Jade on top of that. Seemed to work. And then I got lazy and just use FMs rosin for everything. That works fine too.

Thanks rockinglr, and everyone else. Love the reviews.