I did my best - with my amateur (beginner's) violin skills - to convey this song's emotions!

During the Vietnam war, the country was divided into North and South. The author, Y Vân (1933-1992), wrote this song in 1957 (or 1959?) after he and his family fled the war zone in the North and migrated to the South. Y Vân, who lost his father at an early age, wrote the song as a respectful dedication to his own mother.

In essence, the lyrics compares a Mother's Heart to the vastness of the Pacific Ocean, praises her unconditional Love, and respects her endless Sacrifice!

I myself did not attempt to translate this song into English. I believe its lyrics has too *deep* emotions to be translated accurately from Vietnamese into any other language.  Nonetheless, as FYI, I have found a few (rough) translations by others on the internet:

I also enclose the music score here, which I found on the Internet. 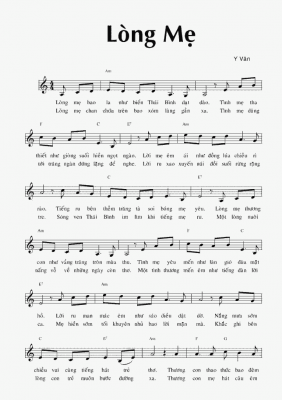 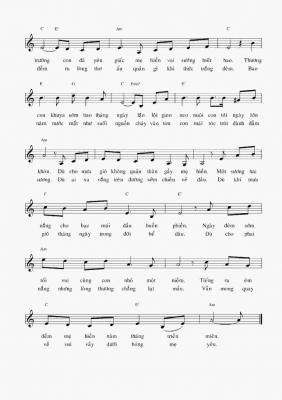 thanks for sharing!  very nice playing and I enjoyed reading about the history you included.  Thanks also for transcribing and including the sheet music.

@V T - If you video yourself playing you can get a video badge.
Thanks for sharing 😁

This is a special song. Thanks for sharing with us.

@Fiddlerman, I should get a badge for real.... 🙂 Yes, I did play the song in its entirety!

I did not even believe my ears when I replayed the recordings of my own playing of this song. The tune came out much better than I had thought. I guessed I input real emotions when I played it...Plus, I have always known this song my entire life, so the tune is ingrained in me... I did not even have to look at the music score when I played it.  Mainly I played it by ears. That is why it came out more naturally than, say, for example, if I play Ode to Joy.

(But if you hear very closely, you can still recognize a few small "thwangs" when I crossed strings - but could not quite balance the bow strokes - and hit both strings.)

If you view the video clip from Zero to 3:14, you will see that at 2:17 or 2:19 it starts showing me bowing the ending section of the song.  In other words, for the first 2 minutes or so, I did not realize I had forgotten to open the camcorder lens, so only the audio went to the H1n hand held sound recorder but not the Everio camcorder.  When I found the issue, I stopped briefly, opened the lens, and continued with recording the final section.

If you notice carefully, the final 1 minute has a slight feel of a "restart" even though it was the ending of the song. The ending is actually sort of a CODA, where the song's theme repeats and then ends at "mi...si mi....la..(la)..."

I want to share both sound files (H1n recorder, 94kHz 24-bit wav format) of my recordings here to you all, but the Wav files are too large and this forum would not allow me to attach them!  Ahh!  🙂

@GregW, thanks for you kind words.

You may find on the Internet piano sheet music of this same song.  For piano, people may transpose the tune up, so that the music is more perked up for piano playing. But for singing, a higher pitch will require higher-pitched voice. My understanding is it will be difficult to sing a sad song with a higher-pitched voice!

Thanks for posting, my Granddaughter is 1/2 vietnamese. Her other grandparents came to the U.S. in 1978, just after the Vietnam war had ended, there both are super folks from Port Arther TX.

@V T - Of course I understand that you played it. It's just that we haven't given badges without the video portion before. 🥴

I'll watch again but at the end of the song the last minute or so it shows her playing the song.

If I'm wrong I apologize, but it appears to a long intro before she's in the video.

Yes, Vivienne is shown playing starting at 2:18 in the youtube video.

I believe she deserves a badge for this.

So sorry. I didn't see her and had other windows open after that. I feel bad now. Will take care of it right away. Sorry Vivienne, of course you get a badge.

@bob, @Mark, @Fiddlerman, and everyone else - thanks so much for enjoying the music! Your encouragement is my biggest reward. The badge is nice, too.  🙂

I am most happy that I could somewhat introduce a nice tune, and the Vietnamese cultural aspects it brings, to everyone who views this forum!

I will try my best to practice and play more violin songs to share with you all.  The next time, I'll try to find a more cheerful song. 🙂  With all the coronavirus news nowadays, we definitely need something cheerful for a change, I think.