I never knew the soundtrack made it onto the radio. The music is great, though. I've always loved it. And it was fun to attempt something outside my typical fiddle stuff.

mark Thanks! I found some simple sheet music for more of the song, but haven't tried more than this little bit of it.

I reached my 6 month fiddling anniversary.... I couldn't think of what song to do for a video, I don't feel like I am playing my reels at a speed for a real video... so I decided to do something I've been wanting to do for a while... Play my fiddle in the woods!

So today after my lesson, I strapped my fiddle to my back, and went for a walk in the woods (hand fed some chickadees along the way) 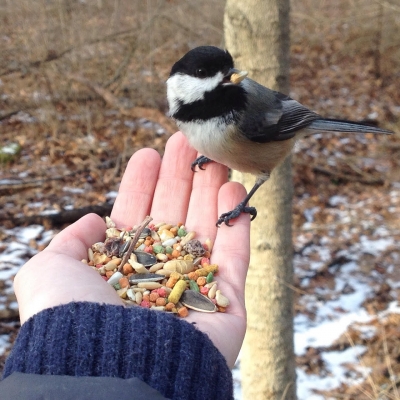 and played a snippet of The Maid Behind the Bar ... rather badly... it was about 45, but with the snow on the ground it was feeling a little colder, and my fingers didn't like that... and then tried a little of Old Joe's Jig since my fingers know it better... but my fingers were even colder by then, so I gave up.

But this is the end result... flubs and all, because for me it was about playing my fiddle in the woods, not really how well I did it, lol.

Behind me just a little way into the trees is a small body of water that probably used to be connected to the river that runs through the park, and then there is a 100+ foot shale wall/cliff (this park is in the valley, so we're at the bottom of all the huge cliffs). I love this park

Grats on the mile stone

I was happy that I finally went and played there. I will have to go back when it's a little warmer out and my fingers aren't protesting so much, lol.

Great picture.. I would so love to hand feed a chickadee.

Good job.  I am so happy to have met you. You inspire the forum and such a nice violin buddy.

I loved your fiddling and the outdoor setting.

That means a lot

And I'm very happy to have met you here, too

I love getting to hand feed the birds in the park. It's a nice little treat

When I said something to my brother about trying out playing the violin in the woods he was unimpressed (as brothers tend to be) and just said "Who do you think you are, Lindsay Stirling?" lol

Great job. Can't believe you're able to play in the cold like that!

Your brother may not have been impressed, but I am. Great job and a nice sunny day for it too.

Sometimes I practice playing with gloves on,, white knit cotton gloves, it's not that difficult to do.

admin @Fiddlestix Thanks! I'm glad I finally did it, even if it was a tad chilly, lol.

Cool! It's great that you were able to play in the woods. It really adds something nice to your fiddling.

There's so many other places I'd like to hang out and play my fiddle in this park... on a warmer day though, lol, with leafs and stuff growing, lol.

I'm sure you do! Will look forward to an other video in the spring!

Try playing in a big church when no one is there. The acoustics tend to be outstanding. At least it gives the impression of greatness.

admin That would be pretty neat to try out, I'm sure it would sound really cool

Made a new video today...

The first song is Morrison's Jig, which is the most ornamented song I've learned so far, with lots of grace notes, and several 5 note rolls. The second finger roll was getting away from me today (it's near the end of the song, on the E string) but I got tired of trying to get it right for the video. I did decided to put two takes back to back of the song in the video, so sorry for that, lol. It's also the first song I attempt to put vibrato in. I had been sliding the last note, but decided it was a good spot to try out vibrato in a song, since it can get boring practicing vibrato on its own.

The second song is a snippet Off to California. I've only been working on it a few days, but it's such a fun song I wanted to throw a little bit of it in there. I really do enjoy hornpipes.... my bowing gets away from me going a little bit crooked on this song since it's new to me.... new songs do that to my bowing, lol.

Anyway, thanks for watching! Hope I don't hurt your ears too much..... Oh, and we are having some high winds today, so if it sounds like someone is blowing into the microphone, that's why. All the windows were closed, but the wind wanted to play along and be heard, lol.

I love your peogress videos @damfino.  I've made videos along the way, but haven't put them on the forum, yet.  Some are too old now.

Sounds great @damfino! I'm sure with all those rolls and grace notes it's not easy but you did great!

@damfino - challenging stuff !!!  You're doing well there, by any measure !