Leave Her Johnny, Leaver Her

Leave Her Johnny, Leaver Her

I wanted to share something with everyone that I experienced recently on St. Paddy's day!

I had the wonderful opportunity to sit in with some amazing musicians and managed to pick up a few songs here and there, as well as some new tricks.  ...and yes, I somehow survived all the reels and jigs! LOL ...although my violin is still in need of a good bath to get all the rosin dust off of it.

The one song that stood out for me, was "Leave Her Johnny, Leave Her." I recognized the melody as an old Civil War Sea Shanty but didn't really know the history of it until my friends filled me in. The song was typically sung toward the end of a voyage and used to air out their grievances about the hardships of a sailor's life.  The "her" in the song refers to the ship.  During the Civil War, the lyrics would be changed for a variety of reasons. I quickly jotted down the notes and tucked them away in my case. ....and promptly forgot about them until today.

I heard the song again in a video game, "Assassin's Creed 4: Black Flag" ...interesting enough, it was about pirates!

I remembered I had the song written down and wrote out the notation.

So, if you want an easy, but really cool song to play, give it a try! Being an Irish tune, don't forget to add in your fills where ever you see fit!  I wrote in the 2 minor ones, but you can do so much with it!

Let me know what you think! 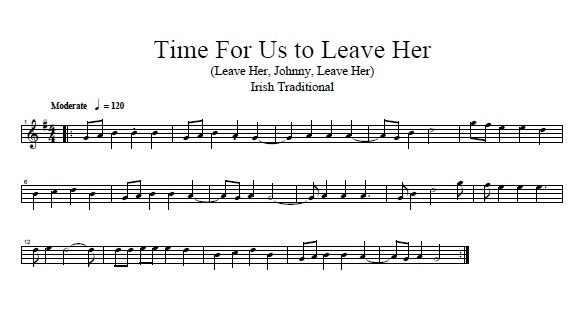 @EJ-Kisz  Thank you!!  This is a great one to add to my collection of sheet music!

Can't help pointing out that the sheet that you posted is incorrectly written. It's obviously off by a beat. The first two eighth notes should be a pick up and the rest of the notes shifted back one beat.

Can you all understand why?

I did a quick search to see if someone else had written out the piece the right way and found this. It's in a different key but with the 1st beat in the right place.

This version is written in 2 with the beat at approximately 60 bpm which equals the other version if you chose a beat of 120 bpm.

Yeah, that was actually driving me nuts! LOL I don't have access to my regular pc which has my regular notation program (GP5) to fix it so I had to use one of those free ones for my iPad(AnnotateMe).  .....once we finish our move to our new house, I'll be able to rewrite things!

With a simple pick-up, those pesky ties between measures would be eliminated as well. ...and it would make counting out the song much easier!

It just doesn't like pick-up notes for some reason. I even tried to add a rest in the beginning of the song but kept getting an error message. With my other program, I can change the time signature for one measure for pick-up notes, but this one is just strange.

What are some good notation programs? I need a new one because GP5 is more designed for guitar and tab. I have a feeling that I'm going to be using it a lot now that I'm conducting a Civil War style brass band!

And don't worry, I will NOT be putting my fiddle aside for the Battery Band!

I'm just doing it as a favor! lol

Sorry Erik, I thought you just uploaded a sheet that you found online. Didn't realize you did it. The piece actually stuck in my head after listening to it. It's so common that notation programs are hard to use and learn. There are still plenty of things I can't do on Finale.

Congratulations on the new house.

Thanks for sharing it.

LOL, no worries! Believe me, it was driving me nuts! Annotate Me sounded good in theory. It's basically a hand writing recognition software that converts your scribbles into notation, filling in measure breaks for you. Well, it doesn't like anything that doesn't fit into measures or accidentals! I had such a hard time putting the into G maj. as well.

I guess it's good if you want to write out an original piece out before you forget it. It was pretty fast. But I think that's the extent of it.

I'll have to give Finale another try. I used the free, limited version before and it worked okay. I just wasn't used to it.

For some reason, this song really stuck with me to. I had never heard it before that jam session and actually forgot the name/lyrics. Thankfully, I jotted down the notes in my notebook and remembered the melody which helped me find the name again.

When working out the timing, I had to imagine working the bilge pumps on an old wooden ship. Every time the bellows would come down and expel the water, that would be a down beat. Thinking like that, the pick-up notes make absolute sense. Could you imagine this song being sung with the sound of forced water in the background coming from deep within the hull of an old time, sailing vessel?

Thanks for the congrats! Exciting times!

That is a great thought. Now a days, anything that has to do with sailing is appealing to me.