Start Your Own Project Here

coolpinkone said
Awh @Feathers you have refreshed my memory.

You could just do Part A.

Right.  I am not a happy bunny!   I "bit off more than I can chew" with this one.  I considered Carmina Burana.  Danse Macabre.   Nahhhh - all to easy (spot my sarcasm there).  Instead, I had a grand plan for my magnum opus - let's do a track from the Rocky Horror show !  Ahhh... nice, I thought.   I found a "not bad" MIDI version of "Over at the Frankenstein Place".  I planned several parts to it - to separately overdub Janet, Brad and Riff-Raff....  I even created an outline story-board - no sheet music or anything like that - I was just gonna "wing it" 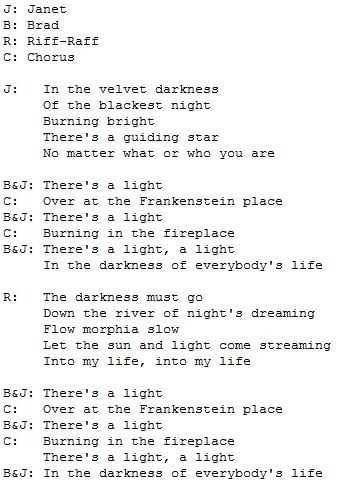 So....  I never take the path most often walked, do I ?   Nope.  Well, it turned into a monster.  I dropped the MIDI to D (it was in E).  But Riff-Raff needs a F3#, so I detuned G by a semitone.   I also wanted to bring something "new" (for me) into it - so I planned to work some higher positions for Janet - but that's still giving me trouble.  Anyway - I was reading @Worldfiddler post earlier today - and boy - was I getting MAD at this thing - so I "calmed down" (just a little) and did a quick take (no vid on it yet) of the tune from the first B&J / Chorus above.

I'm FAR from happy with it.... VERY far from happy, it's full of issues, many of which are due to me being in such a bad temper with it, but, it's a line in the sand.  It will get better.....  When the final version, with video is ready to post, rest assured, I will, as I think I mentioned to @Barry NOT be dressing for the part...

I'm off to play half a dozen "fall-back" tunes to get my head sorted out (oh, and Bill, RE-TUNE THE G) LOL

Went to give you a Party badge but you already had one. LOL
Thanks for the post Bill.