Start Your Own Project Here

Its Australia Day on the 26th Janurary.

Its Australia's national day, much like the 4th July in the US.

You are invited to become an honorary Aussie and participate by recording an Aussie tune and uploading it.

The three that I recorded are, The Wild Colonial Boy, Botany Bay, and our National Anthem 'Advance Australia Fair'

I've attached the music for the tunes that I posted for folks to use or, if you want something else, let me know and I'll try to find it for you.

I'd be stoked if some could join in 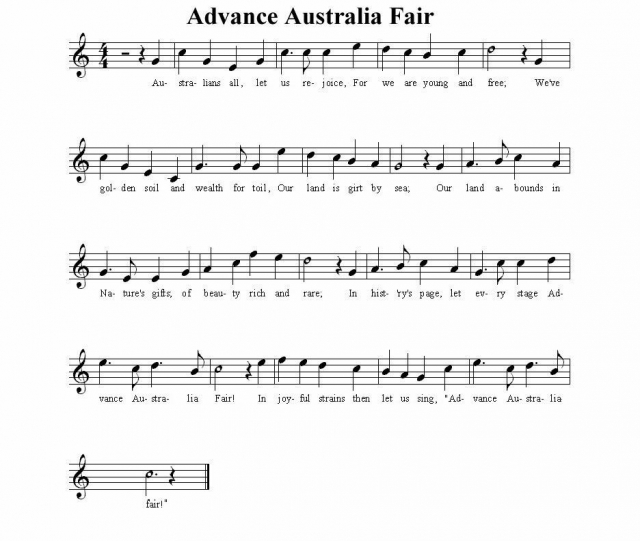 And the Band Played Waltzing Matilda

That's a great tune isn't it. Will have to do that one next year

The first song that came to my mind was Waltzing Matilda.

What tune do you reckon you'll play.

I do have other music if you want it

I'm thinking about "Botany Bay" but if You have some more, bring it in

Yet i've found this one:

HDuaneaz said
The first song that came to my mind was Waltzing Matilda.

Yes for most people it does

I posted it same time last year. May have to post it again. 12 months on I may be able to play it better

Botany Bay would be good. Fairly easy to learn and sounds good. Or you may like to try Waltzing Matilda. 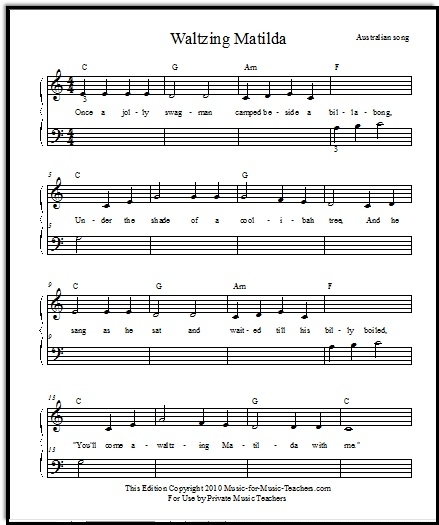 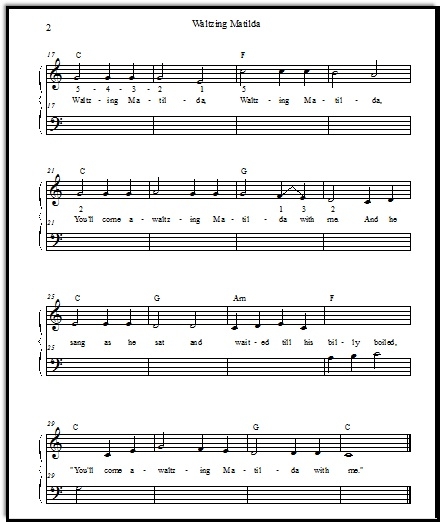 You are invited as well. I'm sure that you could handle it

Naska, I loved watching that video, having been to most of the places shown.  I'm interested to see others in the world actually seeing it too.

I live next to the Great Barrier Reef, so I'm familiar with the coral, sea life and pods of frolicking dolphins.

Now if I only had the sheet music ... but I've at least learned something, the score was written by Bruce Woodley of Seekers fame.  I used to love listening to them, and most of the scores I've seen coming from them are very musical, not just for vocals.

I'm currently working on 'Click Go The Shears' ... we'll see if it's up to scratch for video.

Here it is. Waltzing Matilda

Thank you. I enjoyed it.

I visited Darwin in the mid 80s. My submarine anchored in the harbor. It was a nice visit.

HDuaneaz said
Thank you. I enjoyed it.

I visited Darwin in the mid 80s. My submarine anchored in the harbor. It was a nice visit.

Great. Have never been to Darwin myself. But I'll be passing through there in April on my way to the Philippines. Have to go to a wedding

Hope I didn't destroy Botany Bay too much!!

I need to learn how to add pictures to the video.  I had this one all picked out but can't figure out how to put it on the video.  But why is the flag red in the poster? 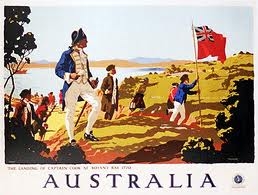 Thanks for your posts Ferret. I enjoyed them.

Thanks for the post mate. I enjoyed it very much. And no, you didn't destroy it

I appreciate you taking the time to do it

The flag is red in that pic because it's the British naval ensign. The Australian naval ensign is the same with white stars (Southern Cross constellation) like our blue national flag. So the red ones are for naval use only.

@ Ferret: And I read yesterday that there is talk about changing the design of the Australian flag in order to sever tie's with England. The people still want to look up to and regard England as the mother country in all respects.

What are your thought's on the possible change, John.

"Waltzing Matilda" is a beauty! Thanks, Ferret!

Fiddlestix said
@ Ferret: And I read yesterday that there is talk about changing the design of the Australian flag in order to sever tie's with England. The people still want to look up to and regard England as the mother country in all respects.

What are your thought's on the possible change, John.

Yes Ken, this is something that comes up from time to time. It's been talked about for many a decade.

My view on the flag issue is this.
The flag that we have represents our history and heritage. Our British origins are represented by the Union Jack and our 'Great Southern Land', as the song goes, is represented by the constellation The Southern Cross And the seven pointed Union Star. Not a bad flag in my opinion.
My thoughts on changing it are this. I don't have a problem with a change if an appropriate design that represents our nation can be found.
My biggest concern would be that they would come up with some 'dorky' arty thing that doesn't really say anything about the true character of Australia and won't stand the test of time. (please, please, please NO kangaroos) Changing a nation's flag is not something that should be done at a 'whim'.
I feel that if it 'had' to be changed, all that needs to be done is to remove the Union Jack and just keep our 'stars' as they are the part of the flag that represents Australia.
As for our ties to Great Britain, I personally don't have a problem with them. We 'are' a totally independent democratic nation and we are in no way controlled by the so called 'mother country'. We became independent through diplomacy and negotiation, not through war, and we carry no ill feelings towards our founders. We just 'grew up' and left the nest.
We have kept our ties with Britian because it is part of our short but proud history and heritage and we are in no way in a hurry to break our ties. We, for the most part, are proud of our origins and 'our' British history.
Well, that's what 'I' reckon.

"Waltzing Matilda" is a beauty! Thanks, Ferret!

Is there any chance of you posting something?

i would really love to see it. There is 'no' deadline on this