OK folks, we've had a few forum members sharing their playing live on http://www.streetjelly.com for a number of years - in fact since around August 2014 - (even raw beginners, like myself at the time, took part) but over the last year or so, interest seems to have dwindled.  The StreetJelly platform was originally drawn to our attention by @Barry - good man, and thank you brother - although his own musical journey has now moved on to greater and better things!

Some good time back I started an event called "Strings on Sunday" on SJ and tried to make it clear that, from the title and when I started the thread here, that anyone interested in playing and sharing (generally with forum friends from here - either in the audience or actually taking part), should just "jump in, and advertise their intention to play" on any Sunday, without myself or Mandy or Barry actually having to say "let's have another SoS get-together".

Unfortunately (and well, that's not a criticism - it's just life) - folks can have other demands on their time, even on a Sunday - and without being "gently prodded" by myself or Mandy or Barry - no-one else ever really "ran with it" (and I perfectly understand that) to set up, or propose another Sunday fiddling get-together.  For the shows we did manage to do (hmm, possibly 10 or 12), we usually managed to get between 5 to 10 folks from the forum to join in the audience, and between 3 to 5 of us actually taking part to play a 30 or so minute session - pretty darned good actually when you think about it - and a LOT of fun !!!

Anyway, since "Strings on Sunday" sort of died a death, I'm still keen to do the occasional show - and I've dropped the "Strings on Sunday" show title, and it's just my own show this time round - titled "Freestyle Fiddling" - and I've scheduled it on SJ for 4pm next Sunday - that's MY TIME UK (I suppose that's between 8am and 11am USA depending on your own local timezone over there). Here is how *I* see it as advertised on SJ - but - if YOU go to SJ and look for the event I have scheduled, you will see the time shown in your OWN timezone - and NOT the 4pm as shown in the (UK timezone) image below (clever, eh ??? )

Feel free to either join in the audience or EVEN BETTER - TAKE PART - and if you do  care to take part as a player - I plan to play and chat for 30 minutes - so schedule your own SJ show 30 minutes after me in whatever timezone you are.  Once again - unless you are in the UK - the REAL TIME the show is on, is ONLY visible by going to StreetJelly to see the schedule, and will always be shown as a time, local to you, and NOT the time shown in the captured image below which is local to the UK - hope you can join in !  (or at least be in the audience !)

I would consider it, but I fear posting my own playing online.  I really don't like to record myself, although I do know of its benefits for practice.

That is not a problem at all Pete - I completely understand, and appreciate your interest - besides - you can always join the audience in the chat window without having to broadcast video.  Frankly, the audience participation in the text-chat window can be just as much fun, if not more-so, than most of the playing !!!!!!

I should be able to pop in to watch

Chat participation is part of the fun doing the shows. If it's just quiet, you feel like you're just playing for the air, haha.

Unfortunately, my doc has put me on the bench for a couple of weeks, so I can't take part. But I'll see if I can catch the show on Sunday.

I'd like to get back on StreetJelly at some point. But I've been limited by a shoulder injury starting not long after my one StreetJelly show, and I moved into a new apartment where I still have boxes in my living room after a year, mostly because shoulder pain keeps me from completely unpacking...

@BillyG Thank you. No worries, I'll be back in the saddle in no time.

For me, the problem has been the site itself. I can run 20 tests and all is fine. Come broadcast time I end up with issues. Not sure how SJ will play out in 2020 with flash coming to and end. We had discussed moving to concert window but they up and closed last month. Stageit still is an option I suppose, but if Frankie would just put things back to they way they was when everything worked, life would be simpler

I still pop in every now and then

We have a few regular StreetJelly players from the "old days" ( thinking of @Barry (who kicked it all off in the first place - good man!) along with folks like @kinda scratchy, @coolpinkone and so on, oh and many, many others...   Then later, folks like @damfino and others joined in and THANK YOU to all earlier participants in our various earlier shows/get-togethers on SJ!  You are all awsome for having the nerve to get-out-there and go busking online.  Well done to those mentioned and of course all those I omitted to mention!

Anyway - latest SJ news  - @Barry effectively resurrected this ( ^5s man! ) and we have a new impromptu-get-together scheduled for 15th November.  I will NOT give a time - because - if you are interested - you HAVE to go to the SJ site and check for the time (which is always shown in your local timezone)  [ Hint -  it is a 2 hour get-together between 5 pm to 7pm in the UK - and east coast USA will be (my best guess) mid-day to 2pm - BUT - if you want to catch the show - as I say - the definitive way to find "when the shows are on" is to go to the SJ site - there really is no other way (and, it is a GOOD way!)

Here's the line-up - go to https://www.streetjelly.com/  to see the show times in your OWN LOCAL timezone-  have deleted the actual times as I see them in the UK

Or look further down the page to find us (Barry and Lyd are shown in a singe image - but they are indeed two separate shows) - again -  I obscured the UK times to avoid confusion.

Hope to see you there ! 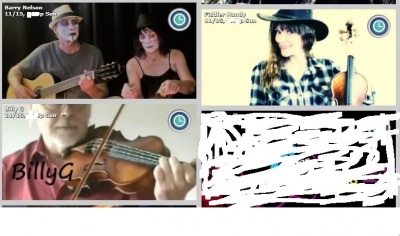 Looking forward to a good streetjelly party. Trying to brush up on some tunes, my performance ready set of tunes has gotten a bit dusty and rusty, lol.

Gonna be a great party !

I know I've read all this over in the past, but will this just be individual live performance?

Or will it be jamming?  If a jam session, any idea what tunes?

It's just individual performance, but nothing stopping anyone from playing along at home if they know the tune.

Yup - @ELCBK - individual performances - for the fiddlers, it's generally soloing, occasionally with a backing track.  I'm not sure what Barry will be doing - he's a multi-instrumentalist and vocalist - could be vocals and guitar, or keyboard - even viola!

Lyd is a harpist, then there's Mandy and myself with fiddle sessions.

The best part of it all is actually the associated text-chat-area where members of the audience can exchange comments (and lots of laughter - not at the players - just having fun I mean !!!)

Easiest way to check it out is just to go online and tune in to any live stream to get a feel for the environment at https://www.streetjelly.com

BillyG said
The best part of it all is actually the associated text-chat-area where members of the audience can exchange comments (and lots of laughter - not at the players - just having fun I mean !!!)

Very true! It's always disappointing to play to a quiet chat, it feels like you're just playing to an empty room, and doesn't inspire you to keep going your full half-hour.

It was hard enough to upload the Fiddlerman project takes - it could take  a  DAY and more, to get a single video uploaded....  Anyway - not about that...

When the internet connection was "kind to me" - it was "marginally usable" and no more.... and I could just about stream an outgoing SJ performance.....  I say "just about" - and on one of them I recall joining (or apparently joining) an SJ session with about 8 folks waiting for my show - it came around to my turn - I played - no one saw it...  the chat was dead, but - well - I just thought "Ohhh, everyone is listening, and not spending time text-chatting" LOLOLOLOLOLOL

So yes @damfino  - it is not us, the players - it is the audience - even in a virtual-streamed show (which is in reality not all that different from playing live in front of others) that brings it alive -absolutely.....