Fiddlerman Master Violin- anyone have it? Thoughts?

Fiddlerman Master Violin- anyone have it? Thoughts?

After some emails back and forth with the shop, I just ordered the Fiddlerman Master violin outfit.

I'm a *fairly* new student of the violin. I have played my old one off and on for about 8 or 9 years but never took lessons until the last 2 months (which have been AMAZE!).

Anyway, I've been realizing how terrible my current violin is (bought from a run of the mill music store for not very much..its a really shiny Palatino that makes my ears sad). I have been trying out violins. Haven't found much in my price range in shops except the Scott Cao outfit. Feeling frustrated by the small selection (trying to keep it under 1K), I turned to fiddlershop. They have been awesome to say the least which makes me feel much better....but wondering what any of you have to say about the instrument?

Not a "specific" answer to your question - but - I also had a real "horrid" starter violin (which actually improved greatly when restrung as a viola with a SP adjustment - but that's another story) - anyway - to get back to the point - because it was so awful I actually got myself a cheap (not from FiddlerShop ) electric - which was rock-solid - and THEN I realized it wasn't "me" that had the issues on the "horrid" fiddle - it really was the fiddle...  ( so I did some terrible things to it, and it became a viola!  Hahahaha )

Anyway - I then purchased the FM Concert - and that was back in July 2014.  I still frequently do switch between that, my EV ( and the "viola" ) and - as far as the FM Concert goes - as an acoustic - nope - I cannot fault it - other than - and I say this only due to my now approaching two years playing it - I am just beginning to wish I had been able to afford/justify something a bit "better" - now - don't misread that in any way - it is just my "ear" and my playing (and many string-type changes) now I am truly at home with it - telling me "there is so much MORE to come" -

Feeling frustrated by the small selection (trying to keep it under 1K), I turned to fiddlershop. They have been awesome to say the least

Welcome to the community Sarah, Your story sounds similar to mine. Started Violin at age 9, switched to Cello at age 12 but then quit all at 14. Now that I'm in my 50s I have taken up the viola. Been working at it for the last three or four years in a dedicated fashion. Last March I bought the FM Master's Viola. On occasion I go back to my old student viola, but only in a pinch. Now I love the Master. Can't say I have a lot of experience with anything else, but it has made a difference in the quality of my playing. (Mind you, intonation and bowing are all on me, but there was a noticeable difference). FM offers a great guarantee. I hope you enjoy as much as I do with my FM Master's Viola.

Thanks for the input. The Master is on its way and I can hardly wait! I'm excited to hear what my playing sounds like on a reasonable instrument. Hoping it meets all my expectations and they hype on the reviews. I think it probably will... I'm going to bring it to the shop where I take lessons and compare it with the ONLY one they have to offer in the price range.

Maybe my dog will howl less when I practice ;).

Glad to hear it stallent19. New starts on the violin, or any instrument for that matter, are very exciting. I have periods where I don't find time to practice only to realize how much I love it when I finally do find time later.

I am drooling waiting for mine to be ordered- soon !

(I tried to just subscribe, but it appears broken)

That's my story, and I'm sticking to it !

Don't be scared, it will be fabulous.

So exciting for sure !!

Don't be scared, it will be fabulous.

You can see the pictures here. These come with certificates. Not really fond of the color of the SAS chinkiest, but I understand that this is what you want.

Do you want a video? I only do them for those who request now a days. If so, what do you want to hear? 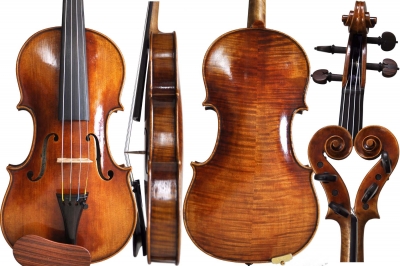 My violin is now in The country of Belize, but as hopeful as I want to be, I might not actually see it until Monday.  :/  (I want to be wrong)

if you have time sure i'd like to hear but if not that's okay.

As as long as the chin rest is comfy I don't mind how it looks.  It's a pretty violin!  Also, you'd think a violin forum wouldn't autocorrect chin rest to chinkiest,  it did in my order too.

Did you by chance get a new samsung phone and use it to place your order and reply to the forum?

risk said
Did you by chance get a new samsung phone and use it to place your order and reply to the forum?

I use an ipad to reply to the forum but used a mac to place my order.

@stallent19  - Welcome and congrats on your new Master violin

I was busy closing on a new building for Fiddlershop today. Of course I'll record it for you if you like. But what do you want to hear?

Fiddlerman said
I was busy closing on a new building for Fiddlershop today. Of course I'll record it for you if you like. But what do you want to hear?

I don't mind, something classical

Am I supposed to rough up the new rosin ? Or will it eventually actually work- seems very shiny  :/

Depends on the rosin, also depends in many ways on its age - some are "naturally soft" ( muy new GoldFlex cake was cut-into immediately by the first bow-stroke - EVERY other rosin I have used, including the one I had previously considered the "best I had so far used" ( Kaplan ArtCraft Dark ) was hard and shiny and required a little gentle scraping to start it off.   Now - whether that is "natural" for that specific product, or because it had sat in a store for like 5 years and "lost its bloom and natural essences" I have NO IDEA - bit it does come into the equation......   well I think it does....