The last violin I'll ever buy

The last violin I'll ever buy

I'm on the point of being unfaithful to Fiddlerman.

I hope my first posting to Maestronet wasn't too clumsy. Martin Swan seems a tiny bit jaded, I think. Maybe too much red non-drying varnish does that to you.

I intended it to be the last violin I ever buy, but I suspect it won't be - it sounds more like a viola, very mellow and easy to play. I dare say if I inherit some money I'll get something that sounds more soloistic.

Congrats on finding something that speaks to you! Violins are a very personal thing, so once you're looking for what may be your last purchase, it's very normal to look through several shops before buying anything. (And besides, Fiddlershop is always a good place to find bows and accessories.)

BTW, I'm pretty sure I'm finished shopping for instruments for my lifetime, but I do intend to upgrade my violin bow whenever I fully recover from my recent car accident. I really should have something better than the cheap (sub-$100) student bows I have for a good workshop violin, and never got around to upgrading because I was so focused on viola.

Gordon Shumway - I never heard of a "Breton Breveté", so I checked it out a bit & listened to a few on YouTube.

Several I listened to had a rich timbre "to die for"!  I can see why you would want to acquire one.

Buying violins is very confusing. When I first emailed the luthier and told him my budget he said that at that price he had one German and one French. Then when I went to his workshop he presented me with five violins ranging from a third of my budget up to my budget. The German was the most expensive, and he admitted that he had overpaid and had put a huge amount of work into it. But My teacher and I didn't like it, and its grain was very coarse, which is not a good sign. So at least I will end up paying less than I was expecting.

The Breton is not a well defined animal and it may be overpriced, but it has a label which makes it resalable. I also borrowed a cheaper unlabelled French violin from "ca 1900". A week ago I quickly played them (I spent the weekend away), and the 1900 was some distance ahead of my Gewa, and the Breton was some distance ahead of the 1900, so I think I will grit my teeth and go for it. But I have today in which to play and record them.

Just make sure that you can return it if you are not satisfied. There is a huge difference between what an instrument sounds like from one environment to another.

Thanks for the advice, Pierre.

It's all a done and dusted deal now. I'm playing the Breton as I type (well, not literally, lol). He's a nice guy - he lends my teacher instruments if she's having any work done. He offered to lend me a double case, but I already had two of my own with me. If I ever want extra work or setting up done, he'll do it free of charge. He even gave me the combination number of his workshop lock!

Glad you got a violin that you love. There are some really helpful people on maestronet, but unfortunately some of their views don’t translate into the real world. Mainly they are dealers and luthiers, so can be very opinionated on what is good and what isn’t. I would challenge any of them, including Martin swan to tell in a blind test, the difference between a good Chinese violin and something like a Bergonzi, I would be willing to bet he couldn’t do it. No one has such good ears that they can tell one violin from another, in my opinion it’s bull sh.t, I have heard really cheap violins which when played by a great instrumentalist are incredible. The vast majority of paying public couldn’t tell a strad from a stentor, most luthiers and dealers don’t like the truth that something they spend ten months working on isn’t as good as a Romanian violin made in a workshop that’s a 100th of the price. What matters most is what moves you when you play and if you have found your instrument, you know it. What makes an instrument sound good is the musician, I have played guitar in many bands over thirty years, and sometimes when I have taught people guitar, they think that buying an expensive instrument will make them somehow play better, which always makes me laugh. Heifetz was told once after a concert he had given that his violin had sounded wonderful, Heifetz lifted it, shook it and said I don’t hear anything. Enjoy your instrument and don’t listen to the opinion of others.

Since it's obviously some kind of Mirecourt ca. 1900, I was toying with the idea of later getting a 120-year-old Bohemian to go with it and contrast with it.

I doubt I'll venture into the minefield of Italian violins. Not with a world financial crisis looming, at least.

But then one has to face the question, why spend so much money on so many instruments rather than all that money on one super instrument? Partly it comes down to what's appropriate to one's amateur status - if I had a £20,000 violin, I'd feel I had to have a £5,000 bow, err, which is twice what my Breton cost!

I deliberately bought a Coda Diamond GX first in order to define the extent of my ambition. Although that Jon Paul Carrera looks tasty, lol!

congrats on the new violin!

Ahhh, belated best wishes on finding your "violin for life" my forum friend !!!  Awesome, and really pleased for you @Gordon Shumway

I'll NEVER be a serious classical "violinist" - not my ambition - I'm just a happy hobbyist/amater "folk-trad fiddle" player - but I do have one particular violin that when circumstances demand (and well, that's usually dictated by genre) - that's my "go-to" and she's perfect!  I can well understand your joy and happiness there !  Congrats !

Each and every one of my 4 ( well, there is a 5th - not quite the perfect 5th - she's a 3/4 size ) - but by heck - for some things she just HAS that old-fashioned down-in-the-dirt fiddle voice.  The action is horrid further up the neck - and - no - I'll probably never move out of first on that one anyway - so really it doesn't matter at all !!!!

I love them all in different ways !!! LOLOL

Gordon did you get your violin. If you did how about posting a photo of it, would love to take a look

stringy said
Gordon did you get your violin. If you did how about posting a photo of it, would love to take a look

The marque's history is instructive. Francois Breton was the luthier to the Duchess of Angouleme, and, when he died, his name became public property, and every workshop in the Vosges sold a "Breton" model (how defined? By its yellow varnish? See the catalogues in the link below), or, more usually, three or four with different levels of "luxe".

There's an encyclopaedia called Henley's which lists the marque and four or five of the labels, but not mine. The only such triangular label I can find at the moment is this one, but that's not to say they are the workshop that made my violin. Basically I have an untraceable Breton breveté ca 1900 from a Mirecourt workshop. The pegs have nice mother of pearl inlay, but who knows if they are original or not. The tailpiece is a Wittner ultra. I don't mind the fact that it has four fine tuners. The bridge is made by Michael Shakespeare of Blackheath. You may notice that I have mutes on the G and A strings. This is because without the mutes those afterlengths both resonate on C#, which gives me a slight wolf note. 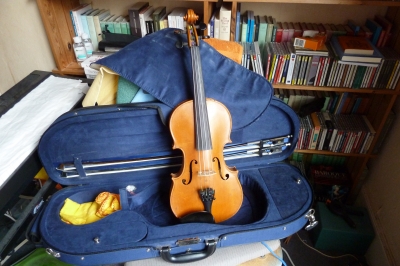 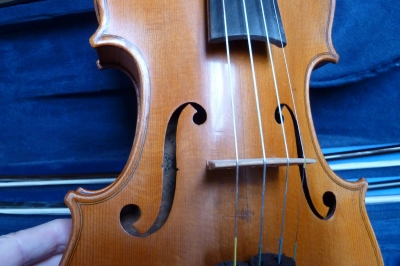 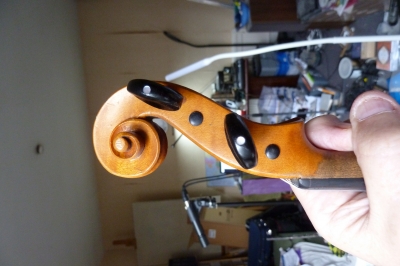 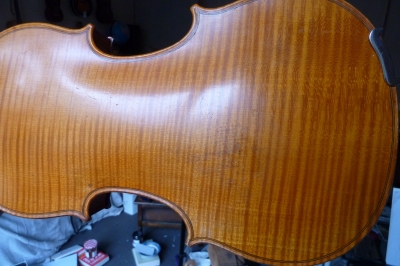 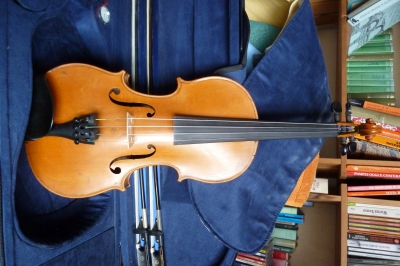 That’s a lovely looking instrument I think the honey colour is typical French, very nice on the eye. It looks like it would have a very bright but rich sound. I think fine tuners are quite ok to be honest, with mine it’s a pain tuning with the wooden pegs, slightest touch goes from two cents under to two cents over. The bit of info you provided is really interesting, I can’t get enough of the history of various instruments at the moment, it’s quite fascinating. Really does look a well made nice instrument I would be made up to own something like that. Thanks for posting the shots.

very nice Andrew!  any chance we get to hear some playing?

GregW said
very nice Andrew!  any chance we get to hear some playing?

Yeah, I suppose I'd better practise and get back to you on that one!

Quite the looker, there - you must be grinning from ear to ear!

Sorry to hear you have to deal with wolf tones.  I'm probably asking a stupid question, but did anyone try to adjust the bridge a little (or the sound post) to try to hide that issue (so you don't need the mutes)?

I figured it wouldn't hurt to ask only because I was getting a wolf tone for a bit & I found a slight adjustment in the position of my bridge took care of it - don't know how or why it started to begin with, but I haven't had any problem since.

Does it still feel like Christmas around your house with this new violin?  Really appreciate you sharing this experience with all of us! 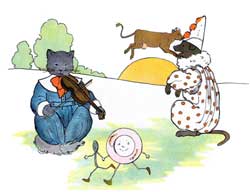 You'd think the labels would feature the manufacturer's name, wouldn't you?

I wonder how sure he is it's Jerome Thibouville-Lamy; and, if so, why isn't the label in Henley's?

So, you think yours might be from the Jerome Thibouville-Lamy workshop, too?

Is curly/flame maple strictly decorative - could birdseye be used instead?   Or is that particular grain pattern of maple integral to the sound?

btw, all you "too young" folks - this is a "Sherlock Holmes" reference.

I have no idea what he means, lol!

I don't think I agree with him, though. It's just flamed, not curly, isn't it?