Violins on trial - can't tell if they're worth the price

Violins on trial - can't tell if they're worth the price

I've been taking lessons for about 7 weeks now on a rented VSO. I really want to stick to it, especially after my teacher said that she's never had a beginner student that got the hang of things as fast as I have. This made me decide to buy an instrument of my own.

My options are very few because of where I live. There is only one guy in the area that builds violins. (his main interest is cello but does violins too because of the customer base) I went there today to take a violin home to try out. I ended up with 2. One priced at 11 500sek (just over 1400 us) and the other one over 8000sek, can't remember how far above 8 (say 990usd)

I was under the impression that he built instruments from scratch but what he gave me are Chinese made. They have an antique style varnish that I'm not too fond of, imo it just look shabby. The few minutes I've tried them today I do hear the difference in sound and they felt easier to play. I will be spending the week really trying them out during practice and will show them to my teacher. But how can I know if they are really worth the price or if he is overcharging? My initial feeling is that I don't think it's worth it. But I'm a beginner and don't know much so..

My budget is 12 000sek but I'd prefer if that included a bow and a case too. But I also want to get something that will last me for years to avoid the double money spent when I want to upgrade from something cheap in a few months or a year.

It's really tempting to get fiddlerman master outfit despite the added tax I would have to pay in my country. Most people seem to love it and I do like the sound in demo videos. In the end it would be about the same price as the local violins except I'd get a whole outfit which I need.

I'm just not sure how to think about it when trying to decide, other than whichever I like the sound of best. Any input would be appreciated. I will also include some photos of the labels inside the instruments. They are both the same brand. 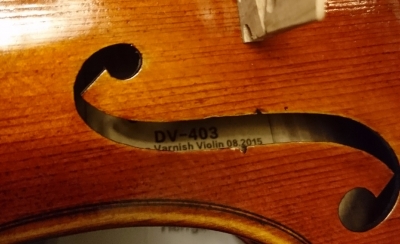 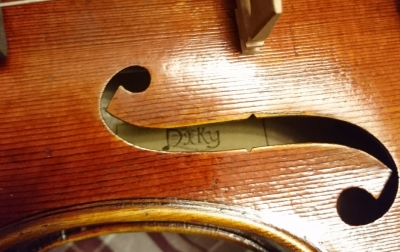 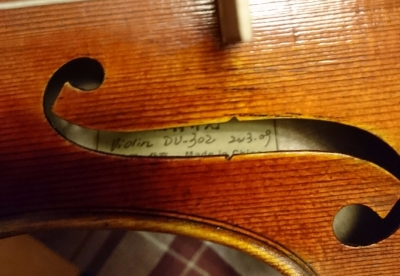 Give us a call. I have several ideas but we need to speak.

You can also Skype "Fiddlershop". Michael, my son, is Swedish.

As much as I would like to, my social anxiety and self consciousness make me very reluctant to actual calls. I prefer doing things in written messages. Especially when I'm still so unsure about what I want to do.

I made the "mistake" though to look at a comparison of the master and the soloist. Now I feel like I'm set on the soloist :p

But I feel like I need to make my mind up before I bother you guys with inquires.

Having been in the "which violin to buy" situation a time or two I'd say go with your gut feelings. It sounds like your rather unsure of the two your trying out. If you're not completely happy with those then In my mind it's not worth spending the money on those particular instruments.  I bought one i was just "ok" with. It sounded great but it didn't feel great when playing and while I learned a lot on it as soon as I upgraded to another violin I made sure i had the "oh I have to have this one feel." and by that I mean when you put the bow across the strings you instantly feel in love with it. Eventually you may need to upgrade, depending on the one you buy and what you aspire to play but if you aren't truely 100% happy with the violin it gets rather discouraging and i feel if your spending around or over $1000 USD then you definally need to have great feelings about your violin.

I can say having bought violins outside of Fiddlershop.com as well as several of their violins Fiddlershop.com has the best set up and best sounding violins with the best prices.  Every violin i've bought outside of FS I've had to take to get adjusted or something fixed on it to make it right...but thats just my personal experience from a non-professional player.

At the end of the day you have to do what you feel is best for yourself! Good luck!

I agree with RockingLR33, you sound unsure of those violins, and for the price you shouldn't settle for something you don't love.

"But I feel like I need to make my mind up before I bother you guys with inquires."

I understand social anxiety (social anxiety runs deep in my family), but please don't feel like you need to know exactly what you want before you contact Fiddlershop. They are great people and will help you make a decision that is right for you.

Absolutely, cannot agree more with the above.

In my opinion, FiddlerShop selects the "best" instruments at any particular price-point, and what's more, are professionally set-up and adjusted before shipping out.

Not only that, but they are extremely easy-going people to talk to (phone, online chat, or email), and I can absolutely guarantee you will find no "sales pressure" whatsoever.  What's more, their after-sales service and on-going support is second to none.

Two of my 5 instruments have come from FS, and I love them (the instruments

) dearly - I have the FM Concert and the MJZ 905 - a very very playable instrument indeed...  The other instruments are just "fun things" I like to mess with... but they do "have their own voice" which is all very interesting, even the cheapo 3/4 size 1920's mass produced copy of a copy of a copy of a Strad "thing" has its place LOL....

EDIT: Oh, and by the way - I must have missed some of your original posts @Bella86 - so WELCOME to the forum !   Relax and enjoy !

But thank you again! This forum doesn't seem super active, but the regulars are always so supportive and helpful and always reply to everything.

Thank you all for your replies. It feel better to have my own feelings about it validated, that I shouldn't spend money on something I feel I don't really want just to "be sensible" and buy locally.

That workshop was super awkward to step into too, the guy hardly looked at me when I stepped in and greeted him.  :/

Your experience with FS is what I see all over the net. And there are so many videos and they are so open with how they work and everything. This is exactly what make me feel like the extra 30% I'd have to pay for importing would be worth it. Feel worth it to have it set up and even tested by people who know what they are doing.

My only concern would be that if I wouldn't really like the instrument once I got it, I'd still be stuck with it. Not really a viable option to return it across the Atlantic. I do trust that they make their violins sound as good as they possibly can though.

@Bella86 even if you don't decide to buy from FiddlerShop, you should contact Fiddlerman. He spent almost 20 years in Sweden playing violin and probably knows every maker there

He will be able to help you with your quest.

I'm happy with everything I have purchased from FM.  My teacher is impressed with the violin I bought at the priced I paid.

Let me add this.  I am a newbe to violin but a longtime guitarist, guitar luthier and teacher.  I was asked many times by students and such what is the best guitar.  They expected my answer to be something like Fender Stratocaster or Gibson Les Paul.  What I told them was, "the guitar that most inspires you to play".  I think the same applies to a great extent to violins.  I know that I can't wait till the next time I get a chance to practice MY violin.  You should feel the same about whatever you choose, no matter the maker.

Thanks so much for the support zpilot.

How do you feel that your progress going so far?

I can hear and feel progress.  My teacher says I'm ahead of where most students are after this amount of time because I can already read and such.  It has taken a little time for me to get used to the fact that the violin sounds different to a listener than it does right next to my ears.  This is going to be fun.

That is music to my ears zpilot. Very happy to hear it.