So why has nobody ever presented a fretted violin before!!!  Wouldn't this make life/sound soooooo much easier.

Vibrato would be next to impossible.

slides would be ouchie!

Looks impressive, but the thing has got to be in exact tune, if the strings touch the frets as on a guitar. IF they don't, then it would be ok.

How do U use the frets near the end of the fiingerboard?

We used to sell the Fingerboard Appliqué but D'Addario stopped making them. I'm going to buy some of the last stock and list it again for those who are interested. There are two different styles and this one is the "Optic" with frets that you can feel. 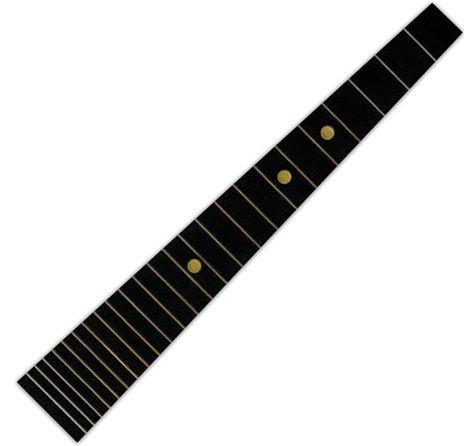 Apart from the fact that it looks kinda cool and makes you take a doublestop to look at it, I dont see the interest. Any monkey can smash fingers on a guitar and produce an album but it takes a talented monkey to smash fingers on a violin. Ear training is the only way to advance, hearing if you are on the right note or not. Those frets do not address the half tones in first posistion and are impossibly close for the high notes for big ol shrek sized fingers like mine. There is no shortcut or chair lift to the top of mount greatness.

I think it's kind of a novelty, but I have no interest in a fretted violin.

Nice, but what about "Sirena" exercise then? It will be WaaWaaWaooo instead of Waaaaaaaaaoooooooo! Not cool! Pass!

Hmm.....looks like the Guitarist's violin! LOL  The biggest problem I see is the elimination of all the microtones!  Unless, you learn the ability to bend strings like guitarists do.

but that is a cool instrument Fred.

Very cool to see what is out there... Thanks for sharing.

Hey, how about a guitar with out  frets

Or a saxophone that you don't blow in , you just bang it on the ground.

Or maybe a banjo that you blow in

No matter where you go, there you are!

Late bloomer said
Hey, how about a guitar with out  frets

Yeah Toni, that's what I thought too.  I think I was suprised more by never having heard of these before.  Very interesting concept & apparently there are a crap-load of them out there.

Check out this video:

To me it sounds... not bad... but a little uncanny. Reminds me of the difference between a real guitar being played and a "guitar" being played on a keyboard. Notice the slides do sound incremented, just like on a guitar. All the notes sound odd to me, I assume because the intonation is completely consistent every time. Loses a bit of the "soul" of the traditional instrument.

Edit: I was surprised he could still do vibrato. It doesn't appear that he's doing a string bend vibrato like on a guitar, but he must be.

I just attempted vibrato on my guitar using the conventional violin technique and I got 0/zilch vibrato from it. It doesn't appear he's bending the string's as you would on a guitar.

I think the fret's you see on his violin are probably flush with the fingerboard surface and are there for asthetics (however you spell it.) I tried bending the string's on my guitar to get vibrato and it's near impossible to bend the string back and forth that fast for actual vibrato.

As far as the odd sound, maybe it's just that particular instrument, I don't think there are two that sound exactly alike. Could be the brand / type of string's being used. There are a lot of variable's there. Also the sound may be from the room he's playing in.  Who know's ?

I disagree. According to the description the frets are real. If you watch when he swings the neck around at the beginning you can also tell they're real. They have depth and the light reflects off of them.

I've seen blues guitarists that do a vibrato that looks similar to what you'd do on violin. Of course the back and forth motion is doing nothing, but they're getting a slight vertical motion as well.

As far as the speed, I use a ton of vibrato in my guitar playing and I can vibrate that fast (even with my pinky). In fact, I just tried guitar-style vibrato on my violin and I can do it there too. Just can't do proper violin vibrato yet.