Ok so I've been playing Violin for a couple of years, and I am learning how to play Viola. Now I have learned that you can play anything you know how to play on Violin on the Viola and it just looses a Sharp. What I'm wanting to do now is learn how to read Viola music, but I'm having a hard time making my mind find the note on the Viola. I know (For Example) if looking at the Treble Clef if a note is an A, the space on the Viola Clef would be a B. However I  naturally want to hit the same string in the same place that I would on the Violin.

I know how to "Read" Viola music but I'm having trouble playing what I'm reading.

I am not entirely sure what you mean by "loses a sharp".  The key signatures for a given key have the same number of sharps or flats regardless of if you are writing it on a treble, alto, or bass clef.

I think of the clefs/staves as indicating sections of a continuum.  If you think of the "grand clef" as is used for piano, with the treble clef on top and the bass clef on the bottom, there is a single ledger line between those two, which is "Middle C" or C4.  And Middle C is the line being indicated by the "pip" in the middle of the design we use to write the alto or viola clef.

If they were all written on one big set of lines, it would look like this.. 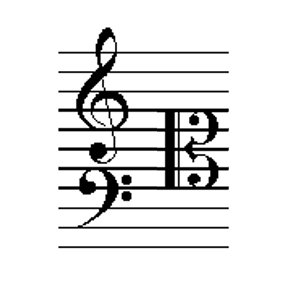 Or at least that's the way I was taught it in school.

I was looking at this post as well, and was confused about the "lost sharp"...  here's another example based on what @DanielB said -  I clipped the first couple of bars from FM's Merry Xmas both for the Vln1 and Vla1 parts - they would "merge" like this if placed on the grand staff - although played at the same time (obviously) - if that makes any sense....

The sharp is on the "F" line in the treble and on the "F" space on the alto, both indicating a key of G.

I see what you mean though about your finger "wanting" to go to the wrong place.  I "understand" to a large extent the staff notation, but, I cannot sight-read/play directly from it in the same way as you - I HAVE to think of the note name so my brain directs my finger to the note, your eye-brain-finger co-ordination is maybe linked to to the "spatial" positioning of the notes on the "lines and spaces" of the treble clef?

....  That probably adds NOTHING to the overall sum of human knowledge, I just found the post interesting to understand other folks' difficulties - and trust me - I have more than enough of my own !!!!  LOL

The only real cure I know of for the fingers "wanting to go to the wrong places" when switching between two different range instruments like violin and viola is to play scales in the same key on each of them in practice.  Then the fingers get used to the differences.

Ok, now I understand what you're saying.

I hadn't thought of it in that way before, but yeah, it makes sense as one way of explaining the difference.

I love the sound of the Viola, and had made up my mind to get in there and give it a shot.  Looking at FM's two, instead of just doing the string change thing.

Since I am still having to work on fourth finger and shifting on the violin.. and of course intonation.. I am thinking maybe I should wait another year.

Good luck on your viola playing.  I know I so love the sound of it and there are some Bach tunes, I'd sure love to play in that Clef some day.

When you get to the viola you will probably love the rich warm tones that come from a slightly larger resonating box; it will be well worth the effort of learning it. I heard the viola for the first time about 18 months ago, and knew immediately that was the sound I always longed for. Now I hear viola music in my head whenever to listen to my playlists ; I think " that song would sound great on the viola!" I've only been playing regularly for 4 months, but I'm hooked.

I found by the simple repetition of scales while reading the music really helped make the switch.. Nothing fancy, nothing fast, just repetition..., then a few simple songs...

As Ripton says, it's just a matter of playing for a while. The technique is quite the same.