I held no expectations but to just to hold a “real” violin, and get the strings replaced on my little cheapo. I called the 3 nearest violin shops in my area and settled on the one that sounded the nicest and most helpful, a family owned business.

Upon entering I was confronted with the sweetest young guy who gave me a big hug and insisted I chat to him a little about my strings, and what price range did I want to go to with a replacement. Probably should have discussed this on the phone beforehand…..I realized that if I could afford one, this violin would probably be the only “real” one I would ever own.

We ventured upstairs and he had laid out several for me to try.  I embarrassingly stumbled through an awful rendition of Danny boy. He told met to carry on playing and left. Wasn't surprised that he left, but was a bit shocked that he told me to carry on playing. I started going through them one by one, started remembering “over the Rainbow”  and “Auld Lang Syne” my bowing was getting more confident, it must have sounded awful! But I was so excited.

An older gentleman walked in he hugged me too, and I thought, Oh, good grief, he thinks I am about to spend a lot of money. He was the father, and after hearing a brief life history of himself and his son, he was a cellist. I asked if there were 5 finger positions on a cello, as I might reconsider my instrument.

He asked me which violin I liked, I pointed out the shiny deep red one – it was gorgeous. Basically anything with bling , shiny or pink has my vote. There were no pink ones.

He played it for me, like a cello, sitting down with it between his knees, I just about fell over laughing, as, when I first started playing, my assistant had been looking on youtube to find out how to hold a violin, and she started giggling and said, “wow look at the size of this violin, this kid is so little he’s got he violin on the floor and he’s leaning over the front to play. Hey I think you need a bigger violin” My response, “You fruitcake, it’s a cello!”

…luckily she found fiddlerman.com. and, I have had about 4 lessons with Pierre, he is an absolute sweetheart, and laughs - I think with me, not at me.

Sorry, back to story…

He had me face the wall and he played 4 violins, there was one that stood out, so I told him I liked that one. My husband arrived, or rather, ran in like something was on fire. He had been at a meeting downtown, got done early and called my office to say Hi. And, my assistant…….in true lousy assistant style, had told him where I was and not to go ruin my day.

So as a concerned husband, worried that I was in a bad neighborhood, and that I would be kidnapped or something, and possibly because I had taken all of my credit cards, he had shown up. Within 5 minutes, all the guys were best friends, he is 6ft 5in, they did not hug him, so I still felt a little special.

We listened to all the violins again, he chose the same one I did. We were slightly influenced by the way the owner gushed about how wonderful the wood was, a solid piece of stripy something, worth tons more, sounds like a $2,000 violin. It looked like a zebra to me, but wait a minute, it must be less than that (little "yeah" in my heart.)

“It’s not the red shiny one” my husband said. “But it will go with everything.” That comment did not deserve an answer. I could no way afford it, I doubted even my Mastercard could. My husband gave me a hug and left. I just stood there, in awe for a while, holding the violin we had both liked.

I asked if they would take a look at my electric cielio and maybe suggest something to make it easier to play. They giggled, and said they would alter the bridge, the neck, new strings, and some pegs or something. Wow!....should have rethought that one, just go build me a new one, you think.

The father asked me to pick out a case, I gushed once again, the one with the deep red furry insides, and tons of little pockets, and a thermometer, and room for 4 bows…..oh good grief, where am I going with this. “No thanks, I’ll just run along and bring my one back sometime cause I can’t go a day without practice right now and it sounds like a big overhaul to me. I am going to save a little more and pop back when I can afford it. Thanks for your help.”

“No need, your husband just paid for it, he said he had never seen you smile like that before, you deserve it, he loves you, yaddy, yaddy, ya…….Oh yeah, and would you please hit some notes with this one……now lets fit you up with a bow”

I drove home, violin tucked away in the boot of my car, went just under the speed limit. Cried for half the journey, laughed for the rest….got back to my office, assistant had done absolutely no work, as usual, and we spent the rest of the afternoon just staring at the violin.

I love my husband, I love my new violin, and I guess I kinda love my assistant.

Congratulations to you on your new "real" violin!

I must tip my hat to the gentleman to whom you are married.

Mimi, what an interesting story! and you tell it so well. Maybe you should do a little writing on the side, after you've practiced your violin.

Best wishes for you and your new violin. Keep practicing and make Pierre proud.

What a nice story! I can''t wait to see and hear you playing it!

That's a great story. You are a lucky lady. I hope you have a wonderful time with your "new" violin!

Yep! You got a good man. Period

HeadCheese said
Congratulations to you on your new "real" violin!

I must tip my hat to the gentleman to whom you are married.

Yep! You got a good man. Period

That's what I told her.

Mimi and I have a lot of fun on her lessons. She has a fantastic attitude about everything.

This is a fantastic story. Wow! Love it. Lucky lady. I got a little happy tear going on!

Ooops forgot to put the pic up, one very happy bunny here - thanks guys, I am so happy, practising and having fun! - I hit a couple of good notes this week..... 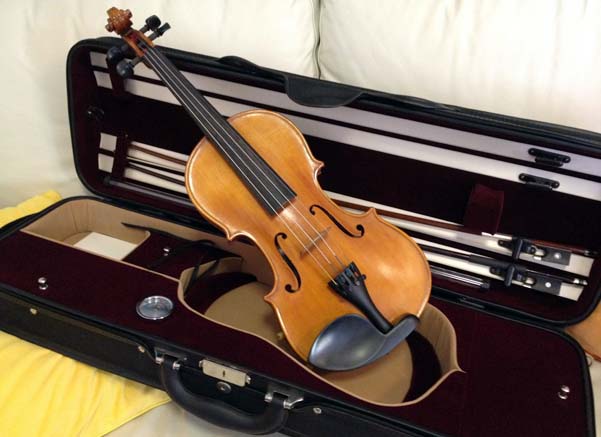 It's beautiful. I want to come over and have a play date. Can grown-ups have play dates? We really should.

i love the story, my wife bought me a turd of a guitar about 10 years back.  it is not good, but i still have it.

The picture is nice.  however, you didn't buy it for it's looks.  we look foreward to audio.

I love your violin and your story...and I can't wait to hear you play...good luck...I am so so so happy for you.

SaraO said
It's beautiful. I want to come over and have a play date. Can grown-ups have play dates? We really should.

Ok, ok.  I am man enough to admit, that little story brought a tear to my eye.  Your hubby is a keeper.  One in a million, at least all us good hubbies are.

Thats right...I am one of the good ones too!

"Everyone is a genius. But if you judge a fish on its ability to climb a tree, it will live its entire life believing that it is stupid." -Albert Einstein

I hit a couple of good notes this week…..

i bet You did more than a couple!

That's a good looking fiddle and a great story.  I second the calls for a video.

Hi!! Really a great violin and your story.

I am also a violinists.