I was thinking of times the violin showed up in my life in some manner, and realized it was all connected, in the sense of one event leading to another. I turned away from the instrument as a child to pursue another interest which eventually lead me back to it....life is strange sometimes. So here's another submission:

Dad was a musician, which meant bum in my maternal grandmother's mind.  He played conga, the only white guy in a Latin band. He told of practicing until his hands bled, and of not needing drugs because the music was his high.

He was also a teller of tall tales, or liar, according to Mom, so I'll never know the true story. No recording remains, but he did have at least two congas.  A fancy one he kept at at work, his real job involving art installations at New York's Museum of Modern Art, and a beat up one he had at home.

He wanted music to be a part of our lives, and to that end I took up violin. I was 10 when I started, in the early 1970s. I don't remember disliking it, but my heart just wasn't in it.  It was more my father's idea than mine. I would eventually play "Flight of the Bumble Bee" in his fertile imagination.   In reality I never made it past second violin in the school orchestra.

The truth was, I had other interests. I was in the midst of my first celebrity crush, an obsession with actor Larry Hagman of "I Dream of Jeannie."  I spent my free time poring over each week's TV Guide and begging my parents to let me stay up late to watch Larry.  My hyper-fandom would go on until almost age 30. I quit violin at 12.

Decades later, a few years after my father died, I decided to volunteer at a wildlife refuge. There I met rehab manager Toni Moore.  Toni was a custom rug artist, pen-and-ink artist, photographer, singer and harpist.  She was a witch. Rehabbed bats. Had chickens as pets. And, of course, cats.  We explored art, digital photography and Photoshop.  It was a creative renaissance for me. I still draw from time to time, and photography is a continued interest.

Sadly, Toni passed away in 2007.  I temporarily stored some of her belongings, waiting for her daughters to pick them up.  Among her possessions was a violin.  I was drawn to it, remembering the instrument from long ago.  I tried to play it. SCREEEEEECH!!!  No, it wasn't time.

At this point, an incredible phase of my life had already begun.  Two years earlier I attended an convention/autograph show to meet Larry Hagman.  That was all it was, meet, sign, say a few words, leave. It turned out to be the beginning of an increasingly unlikely series of events that culminated in my becoming part of "Team Hagman" along with two friends. We worked for Larry at conventions, hung out with him, became close friends.  Larry was an amazing man, funny, kind, charming and a lot of fun!

As much as Larry loved us, we weren't his favorites.  That honor belonged to "The Irish Girls," two classically trained violinist sisters with angelic voices, Joyce and Ruth O'Leary, otherwise known as Sephira.  Perhaps their music reminded Larry of his beloved grandmother, who taught violin.  Maybe he just liked being surrounded by attractive women and beautiful music.  In any case, he adored them, and played their music all the time.

Sephira occasionally performed in an Irish bar in Manhattan. I went to see them with my sister-in-law and we spoke of our mutual friend.  They were wonderful, lovely music played with energy and feeling.  Inspired, I bought a viola and played it, put it away, played it.  Put it away. It was still not time.

They played at his memorial.

My interest in making music lay dormant for a while, but the seed had been planted. Several years later, my enthusiasm increasing, I stumbled upon fiddlerman.com and bought a violin.

For Larry, for Toni, for Dad.

Here's a few videos of Sephira:

What is that bouncing bow technique in the second video called? I love it!

I really enjoy hearing these stories!

@LindaMc  that bouncing bow is spiccato, if I'm not mistaken.

@LindaMc  I am really enjoying your stories! That is so exciting you got to befriend and spend time with someone you admire so much. I also love that bouncing bow technique. I think I saw it first on a performance of Danse Macabre and just loved the sound. There are some amazingly unique sounds you can get from the violin!

this describes my first attempts at playing..... There are five other posts in the series but this one nails the playing! Lololol

And the wind takes your hesitation, and the sun burns your fear, and the rain on your face, make the tears disappear..

Deb,
I posted your story and I'll post yours in a few days Linda.

Thanks so much everyone.

Great story, LindaMc.  Larry Hagman was always a favorite of mine for as far back as I can remember. (and that's a long time) loved him as, "J.R.Ewing" in "Dallas". We never missed an episode and lucky you to have met him in person.

I told the story of playing violin in a "Howard Johnson's" restaurant when I was 6. One year prior to that when I was 5 and had only been playing about one year, my mom had a cousin who lived just outside of Ann Arbor, Michigan.. She and her girlfriend lived together in a house they had bought together. Not having a lot of money to spend on furniture and things to make a home a home, they would enter give-away contests from time to time. One contest I remember being told of was one where they won a whole houseful of furniture, living room furniture, bedroom furniture, major and small  kitchen appliances, they even won a record making machine that was contained in a consul type cabinet. I was also a record player.

One Sunday afternoon, while visiting my grandmother who lived and worked in "Ann Arbor", mom decided we should take a drive over and visit her cousin. We spent the good part of the afternoon at their house. I just happened to have my violin with me.

Toward evening, they were showing us their record making machine and decided that I should play my violin and make a record (just to see how it worked) I don't remember what song I played that time, but if I remember correctly it took like 3 blank records to finally record one with no mistakes. Unlike today's equipment there  was no erasing and starting over, a new disc had to be used. The blank disc's were smaller than 78 rpm's and larger than 45 rpm's.

I sure wish I still had those records, just to see how much I've improved,(if at all).. ha ha ha.

There are still two more stories I have. One is playing for my Doctor and his Nurse when I was 6 and the other when I played solo in a recital at 9. But for another time.

That is hilarious Ken. Imagine how things have changed. I wish you had those records too.

I'll post this one soon too. Thanks so much. So far I've got each of you down for a bow.

I've forgotten totally about this thread.

What's happening with it, Pierre, how many more entries are there.

also was wondering about the bow. FM carbon fiber? I had one and it broke so I returned it to you.

Ken, I'll have Michael ship one to you. Maybe you are entitled to two if yours broke and your submission won.

Thanks for reminding me.

Thanks, Pierre. Right now i'm pretty much using that Pernambuco bow exclusively with the Fiddlerman strings, I like both.

I really didn't get much chance to use the FM / CF bow before the tip broke.

One bow is on it's way. Let me know if I owe you another as well. If the tip broke you should definitely get that one back with a new tip or a new bow. We'll see what they say when they see it. I'm assuming you mean the fake Ivory but maybe I'm wrong.

We'll take care of you in any case. It's rare that our bows break but since they are hand made, they are not all 100% the same.

Thanks for your patience.

@Pierre:,,, I sent the whole bow back to you with a letter that said, "maybe the Mfg. could figure out why it broke. I kinda thought you would return it to them and let them figure it out.

I didn't want to make a big deal (here on the forum) of it breaking, but I did mention it to a couple people in the chat box. I didn't want to ruin sales for you. It was really weird, especially after your video where you tried to break one to show how rugged they are.

Here's a pic of it I have saved. I was tightening the hair and the nut was really loose, couldn't figure out why it wouldn't tighten and then I looked at the tip and it was hanging by a thread. 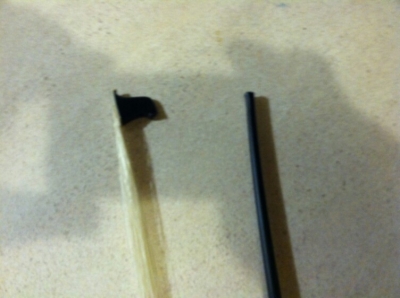 No worries Ken.
We sell at least 10 a day. Every once in a blue moon we get a broken one and we ALWAYS send a replacement. We don't write that there is a guarantee as far as I know but if a person has had this bow for less than a year and hasn't put it through a fatal accident (we never question why it broke) they'll get a new one from us. After a year I figure a new re-hair job would have cost almost as much as the price of the bow.
I'll let Michael know. I don't know why we didn't see your bow. Did you attach a note to the package?

Good deal. You probably already did and spoke to Michael.

I'm in the middle of the Atlantic ocean now.

Yep, the whole matter has been straightened out.

You and Michael are a pleasure to deal with, I'm glad I found this website.

We do our best.