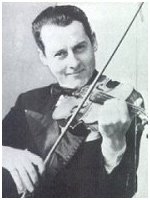 Three classic albums by Pink Floyd will be reissued later this year in multidisc versions featuring a raft of extras. Among the unreleased demos, live recordings and other rarities is a version of the title track from 1975’s Wish You Were Here featuring Stéphane Grappelli. The French jazz violinist contributed a solo to the track, but in the version used on the original release his playing is virtually inaudible in the mix.

Grappelli became involved in the sessions because he and Yehudi Menuhin were recording at London’s Abbey Road Studios at the same time as Pink Floyd. The band’s drummer, Nick Mason, told Reuters: ‘They came to say hello, which was delightful. Someone plucked up the courage to ask them both if they’d like to play something on the record. Stéphane absolutely was up for it and I think Yehudi would have liked to, but he’s not an improviser and I think he just felt he couldn’t do it.’

A five-disc edition of Wish You Were Here will be released alongside multidisc sets of The Dark Side of the Moon and The Wall as part of a project by Pink Floyd and EMI to reissue digitally remastered versions of the band’s 14 studio albums, starting in September.