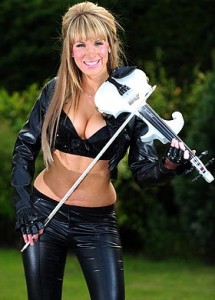 A violinist on Britain’s Got Talent has apologised after playing along to a track by the all-female electric string quartet Bond on the UK TV show. Bond member Eos Chater had criticised violinist Alexandra Parker for simply playing along to a recording of Gypsy Rhapsody, rather than playing live over a specially created backing track.

Chater said: ‘People often send clips of themselves covering one of our tracks and it’s very touching. What I take exception to is a commercial TV show playing our recording, with a musician playing along (not even playing the tune) at a level quieter than our CD. Still, we’re glad Bond has got through to the next round of BGT without ever having to appear on it.’

Parker tweeted an apology, saying, ‘I’m really sorry, I didn’t know what I was doing was wrong – I did play live on BGT and was told it was ok to do this x’.