Which offends? Her short dress or critic’s narrow view? 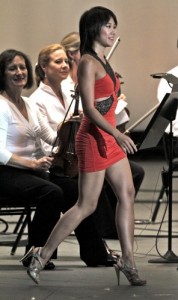 Which offends? Her short dress or critic’s narrow view?

Pianist Yuja Wang’s dress at a concert this month at the Hollywood Bowl has given rise to considerable attention.

Should critics review the dress? Should we comment on how classical stars look?

On the one hand, appearance has no bearing on how an artist sounds.

On the other hand, appearance sends a message. Christoph Eschenbach’s Nehru-style jackets are a deliberate step away from the tradition-bound formality of a conductor’s tails, and lots of younger conductors have followed suit, and it’s certainly fair to comment on that when it seems warranted.

And plenty of classical artists are now playing around, more and more deliberately, with the way they look.

There’s a third factor at play, though, when it comes to talking about women’s clothes in this field. Men have a uniform: They either don formal wear or daringly (sarcasm intended) eschew it.

Women do not have a comparable uniform, in part because women’s fashions are more varied and in part because women didn’t play a major role in classical performance in the years when these traditions were being codified. Yes, there were a handful of soloists. But for years, there were few women (if any) in major symphony orchestras, and virtually no female conductors. Female orchestra members and conductors still have to contend with the issue of what they should be wearing on a regular basis.

The criticism of women’s clothing onstage has been a red flag for me ever since Eve Queler said that when she started conducting in the late 1960s, her clothing so dominated her reviews that one critic complained that a zipper glinting on the back of her evening gown was distracting. This is obvious sexism. Unfortunately, the tenor of the discussion of women’s attire in this field has retained more than a hint of this sexist tone ever since.

What “should” women wear on the concert stage? What is “appropriate”? A general rule of thumb appears to be that if it’s sexy, it’s probably not good — indeed, it almost automatically falls into the realm of cheesy pop-style classical crossover. And if it’s revealing, it’s worthy of a lot of comment.

My particular beef is with Mark Swed in the Los Angeles Times, who was evidently shocked, or titillated, by the dress Wang wore for her Hollywood Bowl appearance Aug. 3.

“Her dress Tuesday was so short and tight,” he wrote, “that had there been any less of it, the Bowl might have been forced to restrict admission to any music lover under 18 not accompanied by an adult. Had her heels been any higher, walking, to say nothing of her sensitive pedaling, would have been unfeasible.”

This review and the dress that inspired it have prompted several responses, including a post on the blog Life’s a Pitch that questions whether Wang should wear such a dress and equates her attire with the fashion choices of Lady Gaga and Madonna.

Let’s have a reality check for a minute. Yes, the dress is short, tight and revealing. But in the real world — the world outside classical music’s bubble — this is not unusual attire for a young rising starlet in the public eye.

For the sake of comparison — or education — go to the blog Tom and Lorenzo to observe what other young women about Yuja Wang’s age wore at a Hollywood event that took place a few days after Wang’s concert. You can criticize these women for their fashion choices. You can like or dislike what they’re wearing. But these dresses and shoes are not inherently shocking — let alone a cause for restricting admission for those younger than 18. (Some of the women might be younger than 18 themselves.)

Yuja Wang is simply working with designers, the way that other attractive stars her age do — and the way that plenty of opera divas always have, from Renee Fleming’s specially designed gowns by John Galliano, Christian Lacroix and Karl Lagerfeld for her Metropolitan Opera opening in 2008 to Anna Netrebko’s sometimes more unfortunate but often equally revealing options. This field should at least recognize this, rather than drawing up our skirts in horror as if she’s doing something patently unusual.

To Swed’s credit, his review went on to praise Wang’s playing. But he, and all of us, should understand that, rather than shutting the doors to the under-18 set, Wang’s manner (she’s a refreshingly normal, down-to-earth young woman) and attire — as well as her remarkable talent — represent some of the best chances we have of getting those under-18-year-olds into the concert hall to begin with.

via Which offends? Her short dress or critic’s narrow view? – The Washington Post.