A slip of paper that came in the package talked about setting it up. I'm curious if this is something I should take to my local music store to have them do or if a rookie (I've never played a note) can figure out how to do it.

The bridge isn't glued down but appears to be held tight from the strings.

The instrument is strung but I'm not sure what if anything needs done (besides tune it).

Anyone purchase one of these? If so, what did you do before you had to start playing?

I guarantee the bridge is waaaaay too high. So you will need to cut it way down.

Here is a picture of the bridge... 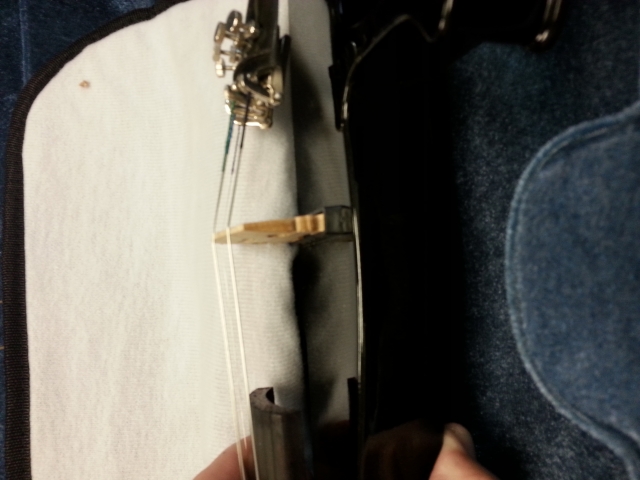 Surprisingly it's not as high as I would have thought. I'm not a fan of the shape and it's a little high for my tastes, but it's definitely fine.

Tune it up and see how it plays.

Tune it and use this tuner if you are not familiar with how to tune a violin:
https://fiddlerman.com/fiddle-.....ine-tuner/
Tune one string at a time. If the pegs turn too easily push in towards the scroll as they are conical. If they stick too much, allow them to come out a bit.
Tune it slowly rather than quickly until you are familiar with tuning a violin. A bit at a time and checking that the bridge is perpendicular and not leaning forward at all. It's OK that it leans slightly back as the strings will pull it forward as you tune the strings up to pitch. Pull the top part of the bridge back slowly and firmly so that you don't go too far if it needs to be straightened.
This video could give you a little idea of how to tune from 0

Great tips. I got it set up and "playing" but am running into some other issues.

After only a few minutes (10-15) two things start to happen. The sound gets raspy and it begins to sound out of tune.

Reading tells me that the raspy sound is likely due to the bow not being rosined enough. Is this more likely because I didn't rosin it up enough to start or does the quality of the bow play into it also? This was a starter kit which came with the violin, bow, case all together so it's probably not the best quality.

I'm not sure why it goes out of tune so quickly though. Is this common with new strings or is it more a function of them being steel? If it's because they are steel...is it worth investing in higher quality strings when I can barely get through a few notes?

New strings will continue to stretch from a day to a week depending on what they are made from. From what I've heard the Cecilio strings are not very good and will probably be the first thing that you want to replace. Certainly, it's not something you need to do immediately though. I'll let others address the rest.

i have found that rasping sounds with the bow can be either not enough rosin on the bow or to much. When you first get a bow they should have no rosin on the hair. you should rosin for a good few minuets going back and forth on the bow to get the rosin really on the strings. On the flip side of that if your playing and your just getting tons of dust and such you have to much. just take a cloth or a piece of cork(like a wine cork) and run it down the bow hair a few times and over the strings. That should help take off a bit of the rosin and the dust if you've applied to much.

Also check your rosin. I know when i was using the cheap beginner rosin that came with my violin it would get raspy or a scratchy kinda sound against the strings, though coulda just been my quality of playing back then to

The quality of the bow usually is more about balance i've personally found out. so i don't think it would be causing the raspy sound its self. i could be wrong. i'm a relative newbie myself but i would check the amount of rosin on your bow and the type of rosin first. i know upgrading rosins did wonders for me. I use the hill rosin Dark mostly n i'm happy with it

hopefully more expiranced players could pipe in here about the bow but for just starting any bow is better then no bow.

As for your strings going out of tune quickly. again one of possibly two things. 1.) strings need a break in period. I don't think steel needs very long. But after you put them on they have a stretching period for a few days that makes it so you constantly have to retune. Thats normal with all strings when you first string a violin with new strings. Now the second thing could be your pegs slipping. If you are playing and you happen to notice the peg turning a bit that means its slipping which can usually be remedied by some peg drops.

Good luck. I hope some of this might help you!

Uzi and Rockinglr...good feedback, thank you.

Rockingrl, the pegs do turn after a playing. What are peg drops?

Also, is the only difference between light and dark rosin a matter of preference?

Heres a link to peg drops from the Fiddlerman Shop: http://fiddlershop.com/peg-dro.....eg%20drops

It helps make the pegs just a bit tacky to help them stick in the peg box so they stop slipping and causing your instrument to go out of tune. I haven't had to use them but from everything i've read and seen thats the simplest way to explain. it only takes a tiny bit per peg to work

rosin as far as dark and light is mostly a matter of preference, especially since most people play in a more controlled environment: i.e. air conditioning/heating. Dark rosins tend to be more grippy and lights tend to be more smooth when playing. Also a lot of places that get really humid and hot, people say lighter is easier to play with because its a harder rosin where a darker rosin is softer so the heat could make it a bit less desirable. and vise versa for cold. But like i said I've found it to be more a matter of preference. I live in a place that gets in the upper 90's (Fahrenheit) with anywhere between 60 and 90% humidity and i still prefer darker rosin. Rosin, for as long as it lasts is pretty cheap. if taken care of and not dropped that is. don't be afraid to experiment and find what you like the feel of better

and especially starting out don't stress to much on rosin. I know a lot of people who still play with student blocks (the $2.00 variety). I use Hill dark, I've heard good things about kaplan to. It's an easy place to get lost in the endless varieties if i do say so. lol.

Yes, I have noticed their shape requires the peg be nudged in a little to even tighten the strings. Makes sense that they would slip out over time.

Yes, do try to push the pegs in harder while turning before getting peg drops. I see peg drops as a last resort. Usually not really necessary just need to get used to pegs in general which are a unique breed.

Going to post this under the same "set up" thread because I'm not sure if its a function of the bridge or not...

Is this a practice/experience issue or is it mechanical?

The first thing I would recommend is that you watch the Fiddlerman lessons on how to hold a violin, how to hold a bow and how to draw a bow and practice that for a while. If you still have problems after that, let us know.

Thanks, Uzi. I've worked my way through Fiddlerman's tutorial videos. While practicing the scales on the A string, I started noticing the issue of how slight the window is on the A string to hit just those notes without hitting E or D. Like I said, this could largely be due to my inexperience so I will keep working at it!

It's possible that you are right and the curve on the bridge is too little. Kevin wrote a great tutorial on how to cut a new bridge which you can check out.
https://fiddlerman.com/2011/11.....n-m-healy/
Kevin writes,"Make a curve template by using a compass or a piece of card stock and a tack, drawing an arch with a 42 mm or 1 11/16 inch radius........"
Most likely I wouldn't react to the flatness of the bridge but you'll have a much easier time learning as a beginner if the curve is adequate.

I just got a Cecilio electric.  It was used so it was already set up.   The bridge seems a little high and probably the nut too.  the strings seem a mile away from the fingerboard.  what's the likelihood that no one ever changed it?

I've been having fun tooling around with it. It's odd, really. but fun.

You mentioned that the bridge is not glued down and it shouldn't be. If you decide to replace the bridge, this bridge sits on a flat surface so the feet have to be flat. There are blanks made for electrics but generally there is enough foot in a normal bridge to make them flat. I have seen too many electrics with curved feet on the bridge.

Tune it up and play it. See hows it plays for awhile then make adjustments later as you learn to play.