Oh, @Irv Sorry for the confusion. I was looking at Gordon’s photos. The guy with the beard and that animal with the other animal in the mouth. They hover over the pegbox, or am I seeing it wrong?

No joy from my email to The Stringers of Edinburgh.  Got a reply today.  They said that they routinely apply the hole in the heart procedure to 4/4 violins to create very acceptable violas, and would welcome my business if I wanted one.  They have not attempted the procedure on a 14 inch viola.

I guess it is up to you to venture into uncharted lands, @Irv . We will all be there with you in our hearts, as you perform the heart procedure. Who knows, you might be creating something great!

What's no joy about the Stringers' answer? Isn't that encouraging that a mainstream violin shop is using the hole-in-the-heart maneuver on 14" objects and finds the results  "very acceptable"?

Mack has three violins with heads on them, these two plus another lion head which is in storage awaiting rework.  The old man one is a little creepy. 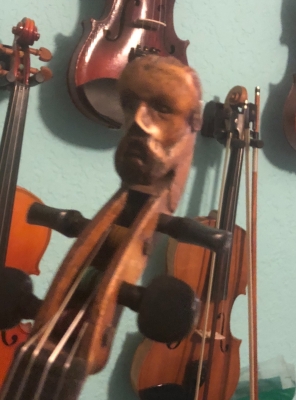 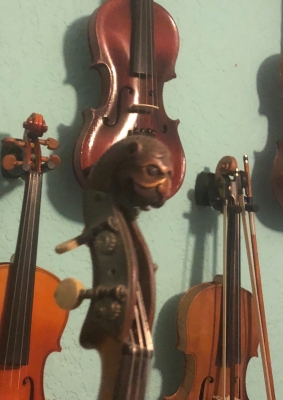 Along with the old man one, the bottom one would spook me.

Hi @bocaholly and others.  Obviously, you are correct.  They now have 20 years of experience with this procedure, which says a lot in itself.  I was just hoping that they would have taken the next (for me at least) logical step.  No big deal since I plan to do it anyway, and I did not receive anything from them discouraging me.

I am getting my supplies for the pending experiment of providing a hole in heart to a 14 inch viola.  Big question.  The Strad study used Corelli Crystal viola strings.  It does not look like Corelli continued to make them for the viola, but I found a new set.  On the plus side, the c String is tungsten wound.  On the negative side is that they are double the cost of my alternative D’Addario Ascente.

My purpose is to create a reasonably inexpensive amateur doubling viola and not a bare boned student instrument, so I can live with a string cost of about $50.  I do not play the viola, so suggestions are welcomed.

On one of my violas I put Jargars with a Larsen A. It is pretty nice. I don’t play that viola much because I have the new Rudoulf Doetsch. I am tempted to take them off the other viola and put less expensive ones on it and save that set as a backup for Rudoulfa. Now, I am a beginner, so take it for what it is worth. Rudoulfa came with Obligatos, so I don’t want to take them off. I believe I bought a set of each, Jargar and Larsen instead of one set of the mix. They were listed as a set but when and where I got them had a sale on strings at the time, so I just got a set of each. I can’t remember where I got them. Hadn’t started shopping Fiddlershop at that time.

Aren't Jargar and Larsen strings both on the expensive side?

Viola strings are generally around double the price of equivalent violin strings, so a $50 string set would essentially be a student string budget. That said, your best bets in the under-$50 price range are D'Addario Ascente and Thomastik Alphayue. Zyex strings are just a little over $50, but very hit-or-miss, working extremely well on some violas (at least one leading viola soloist, Gerard Causse, currently uses them) but badly for most violists I know who have tried them.

If you're willing to budget more for strings: I use Visions with a Larsen A. I've seen Visions recommended for smaller violas and they were an improvement over the Dominant C, G, and D strings I was using before on my 15.75" viola. I was actually a little surprised by the price when I made the switch. I had previously used Visions on my violin, and they are fairly expensive strings for a violin (significantly more expensive than Dominant). But on viola, they're actually significantly less expensive than Dominants, with full Vision sets available for about $80 while Dominants tend to cost around $100.

EDIT: Looks like I was mistaken about the price range for Jargar strings. I've only ever seen people use the Jargar A, which is the second-most-popular viola A string after Larsen.

Thanks for the advanced warning.

Appreciate the input.  A very inexpensive option would be to purchase a Kaplan c string  (which I can get for almost the price of an e string) and use a Fiddlerman violin set for the other strings.  I hesitate to use a metal core string.  I will do more checking on the visions.

Wait, where are you getting that Kaplan C string for "almost the price of an E string"? I'm seeing Kaplan viola C strings listed at $27 and up. Do you have access to an especially good deals?

(I actually want to know, because, as I said, viola strings are expensive!)

Hi @AndrewH.  Sent you a pm since there are not many left at $10 each plus $2.50 shipping for as many as you want.  However, they appear to be gut core instead of metal core (Sorry for confusion, but my preference is for gut core anyway).

Regarding the Vision.  I can get a set of 4/4 violin Vision strings for about $30.  Combined with the Kaplan gut c string, I may get something useful for less than $50.

I can't offer any insights on using violin strings on a 14" viola; although I know two people who play violas in that range (14" and 14.5"), both use viola strings.