Sorry to hear about the issues you had. When technology works its a great thing when it doesn't what a pain and time eater it can be.

Thanks for working on this project,  I believe several are looking forward to your finished work.

Thanks Mark. I'm looking forward to getting it finished as well.

dang Jim ... sorry to hear you had all the annoyances.  Im sure whatever you recorded was still great but can understand if you know you can do better.   It almost sounds like your setup has swapped to windows audio from the interface or something.   I always hate any update once things just work.  Whatever the update gives usually isnt anything Ive used or interested in anyway.   Youll figure it out im sure.. and its something that all will be able to get something from.   bathroom reno...yikes.

Hmm, only 4 hours in the editing suite and it doesn't actually sound that bad!

There is a bit of drift in the intonation that might show up if the piano was playing as well though.

Jim I like how you zoomed and changed camera view.  im gonna use that.  sounding good there!  really liked this.

In my humble, fairly meaningless, beginner's opinion - how we play in the very beginning of a recording might be most important.

I'm not sure about everyone in general, but think there's something to the old adage, 'first impressions' - in subconsciously forming an opinion.

I think it's extremely hard to start a piece off 'relaxed' for a recording - helps me if I can take a moment to remind myself of this.

Jim, I could tell/hear you were tense in the beginning, even without knowing the problems you faced beforehand.  Your playing definitely changed, for the better, when you loosened up.  You have started off much better in your other videos - maybe consider this for the future, when it comes down to making a decision between 2 takes.

There is another thing I find extremely difficult to do during a recording, think I've only been able to do it once, and it took an extraordinary, conscious effort... a look of contentment!

Maybe a good New Year's resolution FOR ALL OF US ON THE FORUM - lets learn to use a facial expression that portrays enjoyment!

...even when we're really feeling a combination of determination and terror. (lol)

Thanks for the positive comments folks.

This is just the first part; the rest is the same as before.

I feel as if I can go forward with what I have without having to re-record the violin part now. (I have to leave it for a while so I can listen again with fresh ears though).

Brilliant move, pat yourself on the back for all that! 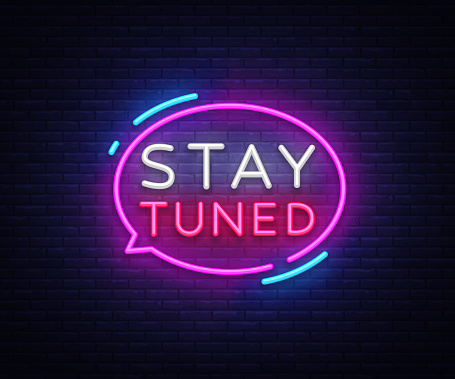 Ok, I've patted myself on the back lol.

Instead of editing make 3 goes start to finish on whatever tracks are included and pick the best to include.  ythat includes bad starts and mistakes.   rerecord if not happy with it.  Id rather hear bad starts that are the true representation unless youre releasing a new video to go along with recent album.....then i suppose.

ABitRusty said
Instead of editing make 3 goes start to finish on whatever tracks are included and pick the best to include.  ythat includes bad starts and mistakes.   rerecord if not happy with it.  Id rather hear bad starts that are the true representation unless youre releasing a new video to go along with recent album.....then i suppose.

Yeah, that's my usual technique when making videos. This one's a bit different though - I'm not trying to prove I can play the piece through reasonably well, I already know I can. I'm trying to make a video that looks and sounds good and that people might want to watch. And in this case the setting up of the gear is pretty onerous and I don't want to have to go through all that again if there's an easier way round it.

I actually took 12 takes of this piece in all - 9 playing it all the way through (a few for each zoom setting), 2 from half way through the Gm section (which I kept messing up) and one that I abandoned half way through because it was going so badly.

ahhh..okay.  lots of work either way!

you could include cuts of setting up to play it.  insert those in between different sections.  also switch back and forth between instruments.   as long as you dont edit the audio.  get your audio and video sync'd together for all tracks thrn just cut and replace the video here and there.  as the song progresses.

ABitRusty said
you could include cuts of setting up to play it.  insert those in between different sections.  also switch back and forth between instruments.   as long as you dont edit the audio.  get your audio and video sync'd together for all tracks thrn just cut and replace the video here and there.  as the song progresses.

I'll definitely be mixing in shots of the piano once it's recorded. I have some nifty plans to make it look quite cool.

I was thinking of doing some sort of 'making of' video if there was enough interest, to include the setting up, recording and editing of the thing, so I would save the setting up stuff for that.

Yesterday was an eventful day!

First I turned my ankle stepping off the last step of the stairs, which turned out to be the second last step; it seemed OK at first and we even had a walk at the coast in the morning, but by the evening it was quite sore. Action needed: always put the light on when going downstairs in the dark!!!

In the afternoon I went into the loft and spent some time clearing up ready for the bathroom fitter; I did well and got it about 2/3 done, so one more session will do it. Afterwards my ankle was really sore though, making me limp, so I'm having a restful day today.

On the Boureé front, apart from keeping up my practice on the piano part, all the work was in the editor on my PC. So I now have:

1) A finished violin track, with colour correction and normalised audio. I'll be adding the piano part videos over this clip to make the final video. This is it:

2) 3 separate 'cue tracks' for me to use in my ear while I record the piano part. I need 3 to cover the page turns; one from the top, one from the Gm section and finally from the DC. I've included the DC cue track so you can see how I set up the sync clap and the count in (which is just 2 bars of metronome clicks). Although it's a video file, the beginning is just audio, and I'll be listening rather that watching. I've removed the reverb as I hope that will make it easier to follow.

That'll be it until the bathroom's all done, although I'll probably touch up the tuning on the piano while they're finishing off, so it'll be ready to record straight away.

Sorry about Audacity debacle and your ankle!  The best laid plans of mice and men often go awry!

Your work on this is looking really good, and you sound great—I like the different camera shots. You & ABitRusty are definitely making me think about how I will complete my next video recording.

Jim hope the ankle gets better quick.  things coming together great!  color correction... I was thinking if i used a cell phone in combination with main camera id have to do something like that to make it look the same. in other words.. make sure resolutions the same and all...film in log or a flat profile so it could be adjusted in the video program.  is that what youre doing or are you saying youre adjusting the brightness white balance and stuff like that?   i ask cause i havent really done much in the way of adjusting color too much so far but have an interest in what its all about.  most cameras have those log raw profiles to assist in it.

@SharonC thanks. My ankle was pretty much OK the next day, so no real harm done thankfully.

@ABitRusty thanks. I'm using Davinci Resolve (free version) for the edit, and it has a plethora of controls for correcting colour, exposure, white balance, contrast, saturation etc - you could spend hours in there; I just click on the 'automatic' button and after a few seconds it almost always gives a satisfactory result. I just used ambient lighting so there's a bit of a cast; you can see the difference in the colour of the walls in the 2 videos linked above - the bottom one has no colour correction. 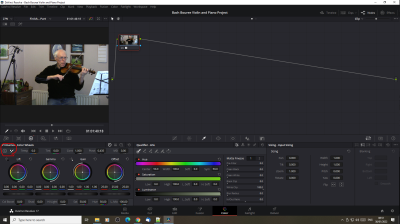 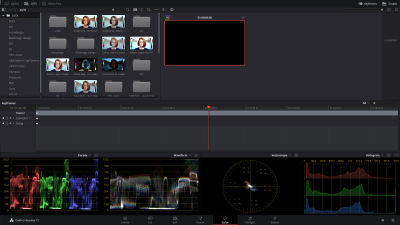 Before I record the piano I need to debug the problem I had with the audio interface. I was up in the loft again yesterday finishing off the clearing up ahead of the bathroom work, and I took the opportunity to dig out my bag of miscellaneous cables and find some spare USB leads, so I'm going to see if changing that makes a difference.

Meanwhile, I've been practicing the piano part with the cue tracks so I can familiarise myself with all the places the violin tempo isn't quite even and match up to it.