Bow grip
Getting to grips with one's bow: where does the pinkie go?

I may have developed a bad habit (yes, another...).

When holding the bow, where should the pinkie go? The received wisdom tells me it should rest on top of the head of the screw which drives the frog to and fro, but when I use that grip I feel I have little control over the bow, and my bowing suffers.

I have for many weeks let the pinkie drop behind the screw-head, and the nail rests against the metal. It is comfortable, and I feel in complete control of the bow in all the degrees of freedom.

I have attached photos of the prescribed grip, and my iconoclastic grip. The question is simple: should I worry unduly about the way I let my pinkie rest? 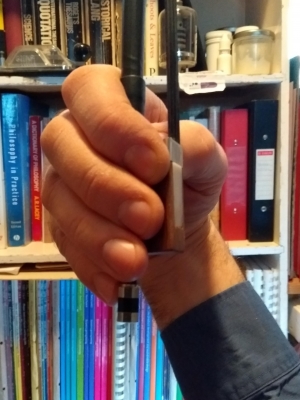 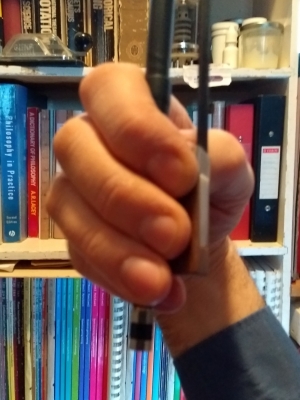 The pinky usually goes, with gentle curvature, on the metal, as in your first photo, but you should spread your hand out more, with the middle finger touching the thumb tip and the index finger more able to press the bow against the strings. I think there's a Perlman video on it.

I can't always keep my pinky there, and you'll see videos of Perlman with his pinky in the air, so don't worry.

I tried the wider grip, and something wonderful happened: I now find it easier to keep the pinkie on top, and although there's some discomfort (I expect it will pass with time), I have now arrived at the correct grip.

If I had a teacher, this would have been corrected when first seen. Happily, the memsahib has approved funds for a teacher, and I'll be calling around the locals this week coming. Thanks for your advice, Andrew. 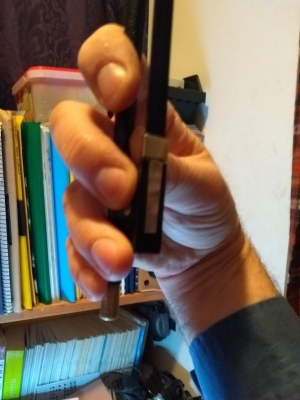 First, we all have some variation (size of hands, etc) but, your thumb should be curved and on the tip of the thumb, in that little spot between the frog and the grip.  It looks like you have it more on the meat part.

What I did to get the curve going more (and helped with placement) was bent it so the knuckle of the thumb was touching the bow hair by the frog.

Notice how he curves his thumb when he tilts his hand in the video:

If you're looking at bow hold tutorials and not learning from a teacher, it may be important to understand that there are two different bow holds that are commonly used by classical violinists, both equally valid: the Franco-Belgian bow hold and the Russian bow hold. In the Franco-Belgian bow hold, the hand is more spread out and the top knuckle of the index finger rests on the bow. In the Russian bow hold, the hand is more tilted and the index finger wraps around the bow more. Both are widely taught, but the vast majority of violinists learn one or the other, not both. It's actually rather hard to find teachers who teach the Russian bow hold in the US and Western Europe.

I mention this because the suggestion to spread the hand out more is from the Franco-Belgian school, while the Fiddlerman video appears to teach the Russian bow hold. (The original post is neither.)

In both of the common bow holds, the thumb needs to be curved and contact the bow at its tip (as Sasha mentioned), and a relaxed, flexible wrist is critical.

At least in the Franco-Belgian bow hold, the weight of the bow is held mainly by the thumb, middle finger, and ring finger. The index finger and the pinky are both used mainly for adjusting bow pressure and balance.

Thank you all for the replies and advice; it's early morning now here in Sussex UK, and my fiddles and bows are ten miles away at home: I'll try to find peace with this problem when I get home in a few hours. I want to get it right before proceeding.

I've got to get my right hand in shape.

I've just had the most comfortable and useful hour of fiddle practice I've had in many weeks. The bow now fits my hand, and I feel in control of it like not before.

Possibly, the culprit was the home-made bow I used until around six weeks ago. This little beastie (I deliberately made it the same length as the Solid fiddle) tensions the monofilament 'hair' by being permanently sprung, and has no nut (frog) for the hand to form over. It's a technical marvel in its simplicity, but it's the wrong shape for a fiddle bow. I haven't played with it since I rehaired one of my regular bows. On reflection, I had no choice but to grip this thing as shown in the original post, and the habit stuck when I picked up a real bow. Below is a photo of the cherry-plum twig bow, with the Solid:

I took pains to make the Solid fiddle to have the weight distribution and feel of a violin, and made the mistake of neglecting the other half of the system.

I'm feeling pretty foolish right now, but I'll just get on with it. Thanks for the link.

There's no reason to feel foolish. And if you feel foolish because you didn't find his video, that's nothing to worry about - yesterday I spent a long time looking for another one - they are not well organised.

I had a very positive evening, bow-wise, last night.

My improved grip has already benefited my playing; I'm beginning to sound quite smooth on some tunes, especially "Brighton Camp" and "Linden Lea", and my scales are cleaner.

My second bow, a cheap Chinese item I bought years ago just after finding the Antique in the jumble sale has now been re-haired (with gorgeous black hair from a benefactor) and now draws over its entire length. I rebuilt it mechanically from the ground up; the 'manufacturer' glued the wedges in, and the plastic tip shield (I don't know the correct name; it's normally ivory or similar) had to be replaced with something: I chose a piece of 1.6 mm thick fibre-glass sheet. The grip was a length of fishing line whipping held in place with clear tape, and this has been replaced with heat-shrinkable tubing (I kept the little rubber sleeve which augmented it). I've kept their nylon cover-slip (normally made of Abalone shell), it works. It now sits comfortably in my hand, and looks / feels stronger and more functional. I've put the Antique's original bow aside in the case as a spare, since that has a stick warped with age due to stress from the nut ('frog') over the decades. I may try to steam the wood locally and reset it; there's still lots of wear left in the screw and threaded part of the nut.

I took a look at my short, home-made, nylon-haired bow: that thing set me back several weeks.

Gordon. Thanks for posting this video. I found it very helpful.

Just to add to the good advice given so far: you always need to remember that just because something works for you now doesn't mean it will still work for you when you move on to more advanced bowing in the future.

You can get away with a lot if all you do is detache bowing where the bow doesn't leave the string, but once you start lifting the bow to do various 'off string' techniques, that might no longer work.

You need to use a proven bow grip from the start if you want to progress in the future.

What we may possibly surmise from both the Russian and the Franco -Belgian grip is that for a healthy bow speed, there must be sufficient pressure of the hair against the strings. The Russian grip achieves this by the extra force of pressing the bow with the meatier part of the hand; the Franco-Belgian grip achieves it by the extra leverage of having the index finger further from the frog.

Even if it is wrong to surmise this from that evidence, the concept of balancing bow speed and pressure is the salient point. Often if I sound thin and weedy it's because my left hand is working so hard that my brain can't control my right hand at the same time. Nicky Benedetti says it in different words - get the bow speed up to a healthy amount, then increase pressure until it sounds harsh, then pull back a little, but not too much, as what sounds harsh to you sounds vibrant to the audience.

She can be a bit waffly, but here at about 8 minutes...

(although, as always with recordings, due to things like compression, we can't hear what she can hear, lol!

And if you have the patience to sit through all of her stuff...

I subscribed to Nicky's channel after watching the first video (from 08:00 as recommended), and plan to spend some time this evening ignoring the wife while I watch the videos with my earphones in. It's very encouraging to have been shown such a professional presentation, quite unlike some of the tosh I've seen on YouTube.

On a more inward note, it's wonderful to have so much more control over my bow: a simple yet fundamental change that's increased my confidence and already impacted my playing.

Thank you for sharing.

Yes, the 'With Nicky' series is the best violin thing I've ever come across on YouTube. I watch them over and over.

I have been watching Perlman's videos on Masterclass.com, those are great.  I swear I end up sounding better watching and playing along with them.  I am not sure if it would be worth the price for those alone, but there are a lot of classes and areas on there that I really like.

Recently I've realised that I've inadvertently switched from the Franco-Belgian hold to the "Russian" hold (Bushkova would prefer to call it the Auer hold).

There's not really a huge difference between them, so as part of sorting them out, I don't see why we shouldn't investigate the possibility of using both of them, depending on circs.

I was introduced to the 'Russian' bow hold during a Fiddle Hell workshop with Paul Anastasio, last year.

BUT, Fiddlerman DOES appear to teach more of a 'Russian' hold, doesn't he?

Paul Anastasio talks about why he learned the 'Russian' bow grip:

I'd rather think of it as just a variation of my 'standard', Franco-Belgian grip, which allows me to slide into that 'Russian' grip position when I need to.

It's supposedly why there's metal winding on the stick (so the index finger glides easily).

This is my current favorite video on BOTH bow holds, by Simon Streuff:

Although I do not recommend Simon Fischer to beginners (1000+ pages), I have not got rid of his books yet. I was sorting out the bookmarks in them and I came across The Violin Lesson, p. 43, where he pretends that he is offering advice on how to prevent your hand from slipping up the bow. His advice really doesn't work. Your hand will only stop slipping up the bow if you stay aware of it and correct it whenever you detect it.

But it is interesting that he writes of the first finger that you should NEVER use the Russian hold (which he, like Bushkova, calls "the old Auer hold"). This is likely to be good advice, but you must also remain aware that it is possible that Fischer is just too pedantic at times.