Chords are the landscape..

Melody is the story.

thats some free zen stuff there.

So, you don't feel there's any potential emotional contribution from the chords or Chord Progression?

I've been learning about Japanese scales - they're mostly Pentatonic.  This C 'Yo' Scale is a C Major Pentatonic, with the 3rd & 7th removed.

*The C Yo Scale is ALSO the 5th Mode of the F Major Pentatonic Scale - took me a while to figure this out, but thanks to ABitRusty - I finally understand why.

Our Western Major Pentatonic Scale = the Japanese 'Ritsu' Scale, both have the 4th & 7th removed.

Amazingly different feelings, depending on which note is removed.

So, you don't feel there's any potential emotional contribution from the chords or Chord Progression?

I actually think the opposite..  I think the chords play a huge roll in emotional contribution and can alter the melodies affect or direction.   Thats why i like using backing tracks and see what happens.  changing chords, key, can lead to different results when you are playing around with improvisation.  chords are kinda like the backdrop or setting that can draw out or alter an improvised melody... rhythm tracks even more so.   a rhythm track with some chords playing on it and you coming up with melodies just by practicing scales is fun...and interesting once you get started.

im talking about improv not putting a backing track to an existing melody.   two different things.  in the case of knowing a melody ahead of time...its fun to try different chords..  start diatonic then just try different things.  see what works what doesnt.   write that down and then go back to theory and maybe see why it worked...or reasons why if your needing to know the science.

Thanx for clarifying that!

Your previous statement about chords being the landscape had me Confucioused. 😳

no prob...  but I still sorta feel that way about them.   the landscape statement isnt negated by my next.  If you see a nice sunny scene of a lake and asked to come up with some short story about it vs an apocolyptic cityscape... youre probably more likely to place the zombies in the cityscape.  for the most part..in general. rofl.

minor chord progressions vs major... yadda yadda blah blah.   seems like its been a thing to me.

now you could intentionally change that around... BUT that falls into the 2nd post...you sorta KNOW thats what youre doing...taking a melody that sounds one way and giving it a different feel with chords.

listen to how Dennis Cahill frames Martin Hayes fiddle playing.  the way the chords and backing is played helps change and/or add to the mood..to me.   complements the way he fiddles tunes.

Totally agree - that's one of the reasons why I think Chord Progressions and chord choices are important - should be mentioned more.

BUT, it doesn't HAVE to be provided by a guitar or other harmony instrument - I believe we can also intermingle it, make it more prominent within our melodies on a single Violin/Viola.

This also relates to classical music, even though harmony/chord changes occur internally, where different instruments only play a small part of the whole.

People learning Classical Violin should also be concerned with chords & Chord Progressions, because if they see how this works - adding certain chord & harmony notes, normally played by other instruments, can help create the difference between a mediocre Solo piece and a FABULOUS one - for GREAT personal enjoyment!

Don't most people think of the Violin as just a melody instrument?

I would have appreciated getting a glimpse of WHY it's important to learn more than just dots on a page for Fiddle tunes and Classical Violin - sooner... especially so that I understood how the violin can be an amazing harmony AND melody instrument, all in one. 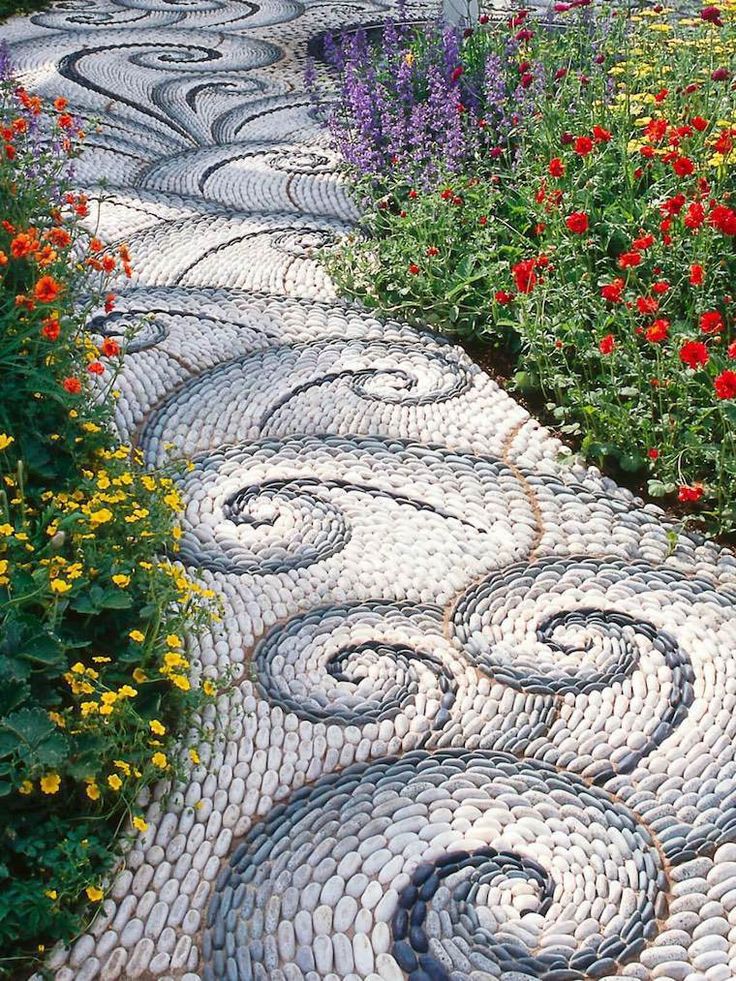 Sorry, absolutely NOTHING against jamming with others!

I know where I want to go, searching for my best path... just not aiming to come anywhere close to Roman Kim in my lifetime.  (lol)

i dont know anything about the Yo scale but relating to modes..

If by definition the Yo scale is built  from the 5th degree of F major pentatonic then the I triad would be from a C.. he probably found an F inversion worked better placing the C note in bass..   Basing off his video and what he explained.

OMG - THANK YOU for making me stop & think!

I screwed up - saying F didn't exist in 'the' Major Pentatonic Scale, maybe thinking C Major Pentatonic doesn't have F - but I was caught up wondering "why NOT the C Mode from the F Yo Scale?"

Then I got waylaid by Wikipedia talking about Pentatonic scales being hemitonic or anhemitonic (the Yo Scale being the latter) - but no talk of Modes!

I got what you were saying, but this guy throwing PENTATONIC MODES at me threw me for a loop!  ...even had me wondering if he was talking about the F Mixolydian Pentatonic scale! 😳

...until I found this view of the F Major Pentatonic Scale... duh. 🥴

I had to find if the F Yo scale could still possibly be used as a less confusing alternative to the F Major Pentatonic.  Found the scale & counted out the pattern starting on C - finally, saw it DOES NOT WORK.  So (another duh), the C Yo Scale is NOT also the C Mode of the F Yo Scale.

Geez, what a stretch - almost thought it was a free-for-all!

Now, I have to look at the video again, because I've lost ALL sense of what the Chord Progression was doing and what I originally wanted to talk about! 😵

I actually feel pretty stupid, thinking a scale could be a Mode for more than one other scale, but confess I'm still not 100% sure it's not possible somewhere.

Thanx again, for helping me!

yeah c mix has same notes as F maj.  but root is C.  chords will be arranged different though.

cant help you anymore on Yo scale.  Tell me a tunes is in mixolydian, dorian,maj, or minor and I may get an idea of where its going and am happy...

the backing player would have to be concerned with what chords to play at that point.  I probably would ask..what did you do there and get an idea of why they chose whatever they chose.. then maybe later try and piece it tovether again and learn from that on guitar.  maybe try and figure out what double stops sound good with the melody looping off recording in the background.

Whereas Sakura Sakura uses the in scale.

Gordon Shumway said
Whereas Sakura Sakura uses the in scale.

If you say so..Ive no idea about that.

@elcbk Its an F chord with C in bass..

and your fingerings for the chord chart look amazing!   glad i dont have to "fret" over those...lol

🤔...  I'm still missing something.   Hope you can see where I'm going sideways.  I really want to be able to go on, but not until I get this straight.

Im used to and havent needed to know past notating chords other than the F/C method.  It seems to me that your studies have given you enough to recognize some technical issues there so I dont think you should be worried or concerned...be happy!!  hey, youre soaking up a ton of material...more than I ever have done.

I think someone like Jim who has played piano for a long time or anyone thats really studied piano would be a bigger help here.  if its guitar related too is past where i ever got.  which isnt difficult but what ive picked up has been put to use for the most part.  studied what I needed to know to get by.

But I see where you are coming from with the video, Im just not sure its something Id spend alot of time trying to get.   Id probably go down the path of studying chord inversions, slash chords on a video specific.

I have to say I learned something 😄  never have seen I64 listed for anything.   its always been F/C. or C/E.  something like that where you are using another chord tone in the bass.

I went back and searched edlys and my Alfred complete jazz guitar ( that i havent used in a few years btw) book and didnt find a thing.   I could google but that would be cheesy...rofl..

Let me know what you figure out.. interesting!

well there you go! 😀

@JohnG can get away with it..  i didnt want google to save me after trying.  i threw myself on the mercy of those that knew those terms all along..

FINALLY, with fresh ears, I listened (again) to what he said near the end of the video.  The narrator definitely mentions that the 1st chord, the F/C, I64 is a 2nd Inversion.

THANK YOU!  ...broke me out of my tunnel vision & pointed me in the right direction!

THANK YOU! ...kept me on it & helped me stay focused on the F/C, with the C in the Bass, significance!

You both convinced me to search googly again & guess I must've used the magic words this time, found enough info (other than for guitars) to help me pull everything you gave me, together.  I'll link some sources, but I was obviously reading way too much into everything!

F/C and I64 - BOTH show this is a 2nd Inversion Chord - TWO different ways of  describing it.

I64 tells it's a 2nd Inversion Triad of the Root, or tonic (F) - which is (C,F,A), but Six-Four Chords have special rules, making it (C,F,A,C)!  This term is more a description about this chord's FUNCTION.

There are two specific doubling and voice leading rules for these six-four chords that you should always keep in mind:

There are three types that behave like non-chord tones – the passing 6/4, the pedal or neighboring 6/4, and the cadential 6/4 – as well as the simple use of an arpeggiated 6/4...

The type of Six-Four Chord this particular one is - is MORE than I care to think about (right now), but there's a better description & more about each kind, here:

For anyone who doesn't know what a Chord Inversion is, this is the rotation for the F Chord:

The Chord Progression used for the tune in the Japanese Yo Scale video is:

Now that's over, while scouting around today, I found this REALLY COOL Circle of 5ths CHORD CHART!

Don't think I've really gotten around to mentioning that Chord Progressions follow the Circle of 5ths!

There's a ton of info on this chart you can print. 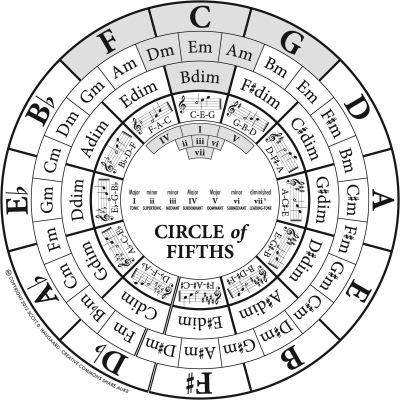 Don't think I've really gotten around to mentioning that Chord Progressions follow the Circle of 5ths!

We kind of both did on page 1!

This video is a great way to piece together most of whats talked about so far.   A kind of real world walk through along with a section that discusses the orchestration of this song.  Sorta gives an example for how a string section could play a chord.