I am looking at various methods of trimming palm tree fronds using a tethered drone (can you tell I just visited Florida).  An electrically activated hot wire cutter may work, but the cut is so small that the drone might get caught in the cut (or the palm tree may burn down).

Bosch markets a tiny battery operated chain saw, but they do not appear to be available in the US.  If anyone has such a saw and would like to help out, I would be happy to send you some frond stems to have a go at it.  Thank you. 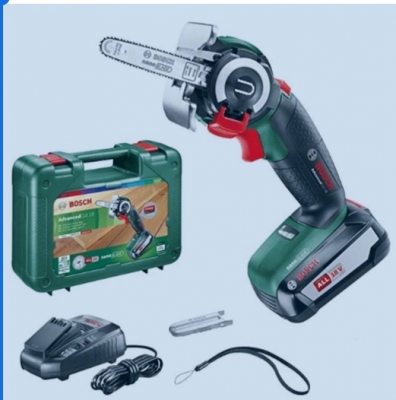 Did I read that right? Are you cutting palm tree fronds with a CHAINSAW?! Whatever are you doing and making?

Not to take away from Irv’s thread with my question, here is what Irv asked:

Irv said
I am looking at various methods of trimming palm tree fronds using a tethered drone (can you tell I just visited Florida).  An electrically activated hot wire cutter may work, but the cut is so small that the drone might get caught in the cut (or the palm tree may burn down).

Bosch markets a tiny battery operated chain saw, but they do not appear to be available in the US.  If anyone has such a saw and would like to help out, I would be happy to send you some frond stems to have a go at it.  Thank you

@Mouse and others.  Arborist (light weight but full sized) chain saws are typically used.  The scale of the photo may be misleading but the chain saw I am considering is about as long as a pinky finger (ring finger if you play a 3/4 sized cello).

But, Irv, whay can’t you use shears horticulturists use? Again, don’t let this question change Irv’s topic. If you have one or know where one is available, don’t let my questions keep you away. I am just puzzled. Sorry, Irv. This is interesting.

I will ask my husband, Irv.

@Irv  I may not be following you but it seems like youre planning on attaching this to a drone.  is that correct?    I'm thinking youd need a commercial type that would have enough power to fly with that amount of weight.  what model drone are you going to use?  I know the small mavic air I have wouldn't cut it..no pun intended..well maybe a little.

Maybe a little chainsaw and a ladder and a good insurance plan?

alright @Irv !  you're post caused me to go off into the interwebspherehole... I see what youre on to here.  updates required now sir.

this one is a little more omnious.  the tree part is useful but the snowman makes you think.   you might check regs on what you can attach and such.  faa has a whole faq page for such.  I think youre getting into the BIG drone market with any weight at all.

Irv said
I am looking at various methods of trimming palm tree fronds using a tethered drone (can you tell I just visited Florida).  An electrically activated hot wire cutter may work, but the cut is so small that the drone might get caught in the cut (or the palm tree may burn down).

Bosch markets a tiny battery operated chain saw, but they do not appear to be available in the US.  If anyone has such a saw and would like to help out, I would be happy to send you some frond stems to have a go at it.  Thank you.

@Irv  I think the key word here is tethered..sorry for the confusion.

They also require that voltage adapter(?) thingy if you find one. On Amazon, the ones sold in EU require that adapter thingy to be able to be recharged in the US. It was asked about in the question section of the item. Bit, you probably know all of that. I was happy for a minute when I found that saw on Amazon and then I saw it was the EU Amazon or something like that. That adapter should be easy to get.

Do you live where there are Palm trees? There were some in the courtyard of the place we lived at in Vegas. Landscape employees climbed the Palm trees and trimmed the ones needing trimming. “Look out below!” Other fronds just fell to the ground periodically. Would not want that job. I love Palm trees.

This question needs asking. Do you really think this is a good idea?

Harbor freight will ship you an electric on a pole.

@ABitRusty and others.  Currently coming back from a month in upper Florida.

When my wife was on the beach, I noticed the town’s highway crew trimming palm trees along the street right of way.  So I took my bicycle and cell phone (stop watch) and did a sort of time/motion study on the crew of three.  The trees were rather small (from about 12 to 18 feet tall).  Two people acted as traffic control/frond gatherers.  The last member was in a bucket truck with a gasoline powered chain saw.  Another crew of three picked up the frond piles with a truck mounted hydraulic clam shell loader.  Six staff and about $200 k of equipment.  The process seemed very capital intensive and inefficient.

The staff told me that the biggest problem was wasp nests in the trees.  Swinging around the chainsaw is tiring and they try to switch out the chainsaw operator a few times a day.

So I started to think about the process using first principles.

I know nothing about helicopter drones, but the design that most interests me is made by intel (see photo).  Those cost $20k.  The consumer product that seems the most suited in terms of operator interface is the dji mavic.  I think that I could parallel the wires going to the four propeller motors so that I could package 8 motors (like the intel model).  Speed is not a big issue here and I might obtain more payload lift by using a 3 lobe propeller.  But the biggest gain in payload lift would be gained by tethering the drone and supply power from the ground.

I already figured out that a vacuum cleaner cord return mechanism has power contact rings that I could use.

The cam shear mechanism used by Jamie (above) has a lot of difficulties.  So far on my list is an oscillating saw blade, counter rotating dual circular saw, hot wire, and Bosch micro chain saw.  The frond stem has a hard outer coating and a soft inner pith, which should not be too hard to cut through.

If a drone is used, something would be required to retain the vertically pointed fronds while they were being cut so that they would not fall on the drone.  So hard the craft, so little the time, so very much to learn. 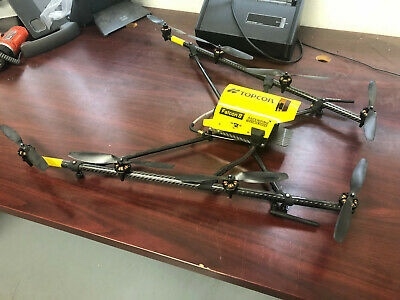 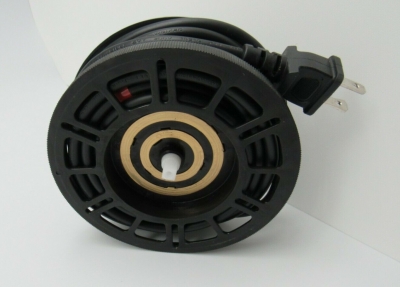 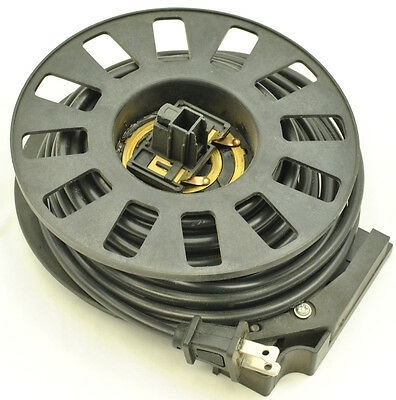 @Irv  I'm thinking you should check the inspire line from dji.  battery operated branch scissors might be better for cutting.  a hot wire may have fire issues if we are thinking of the same thing.  looks like an interesting project though.

@Irv heres something to investigate to replace the trigger on the tree branch scissor.

Some coding involved but  once you size a relay correctly you should be able to remotely activate it.

@ABitRusty and others.  Regarding the fire hazard of the hot wire.  Perhaps spraying the fronds with water from an inexpensive pressure washer as a preventative measure?  I think the moisture content of the living plant should be adequate for the small thermal input I an taking.

I would like to be able to do 3 per hour.

LOL. Irv, you are always good for a laugh. Thank you so much.

Incidentally, I received a DJI Mavic Mini from my wife on Christmas. It's so much fun.
Here are two pictures I took with it, not using the higher resolution since I had not yet purchased an SD card.....

1st picture is in the warehouse over looking the surprised luthiers. LOL 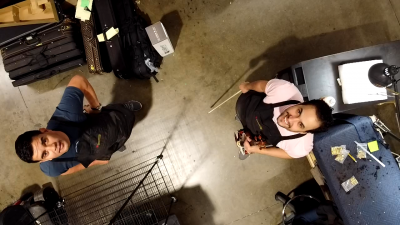 This picture is of Asa and I on Kokomo over the ocean over looking Fort Lauderdale.
Incidentally we'll be sailing to Key West for a 2 week vacation starting Saturday. 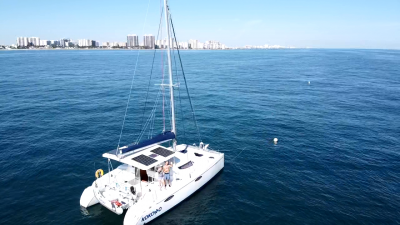 That ocean photo gives me the willies just looking at it, but at the same time, a desire to be there. I am such and “oxymoron”!

@fiddlerman I haven't got the nerve yet to try and launch/recover from the boat.  maybe this summer.  I still have the dji you crashed your drone insurance so I should be good for one attempt.  the takeoffs arent a problem but the landing might be interesting.  did you catch it by hand or set down on the deck?

Those things really fascinate me. I have a few cheapos. Considered the high end. Have not convinced myself. Mainly because I can buy 4K stock footage online. Not the same thing as having the freedom to film whatever you want I know. The other consideration for me was I wanted to launch it off of a mountain top that's probably over 400' up. It's a sort of canyon sided by mountains with a river running through them. There are eagles there and I was concerned one of them might dive at it, connect and that would be the end of Mr. Drone....and probably Mr. eagle too.

The other places around me that are of interest are off limits to drones. I could capture plenty of corn fields and trees though lol.....I guess I had better stop droning on about it.

Hey that's a cool boat Fiddlerman! Those pontoons would make me feel so much more secure. Hope you enjoy your time off!

@starise we have an eagle that visits to pick through road kill around the road sides here.  so majestic.  haven't been able to catch any footage though.  not much other than trees and fields here either.  deer A.K.A Forrest rats all over the place.  theyre favorites of said eagle once the drivers pick up their car parts and move on.  the drone came in handy inspecting the roof when some high winds came through.  I rationalize the purchase with one.  yup..good thing I had it.