Let us hope that only tree limbs are cut. Not that I doubt your piloting skills, Irv.   👨‍⚕️🧑🏻‍⚕️ 😉

@GregW and @Fiddlerman .  I assume that you are aware of this drone accessory? 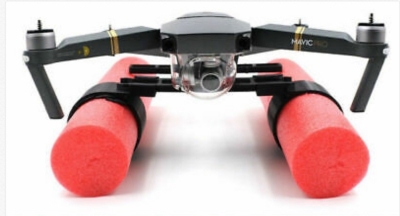 That is fantastic.  I need that. I've been flying off "Kokomo" on our sailing vacation these past two weeks and always scared that I'm going to mess up. I have the insurance but I don't think it will apply if I loose it in the ocean.

Now, what Jaws 3 and the gator in Lake Placid did to a chopper, a sea bass could do to that drone, so watch out!

@GregW and @Fiddlerman .  I assume that you are aware of this drone accessory?

That is fantastic.  I need that. I've been flying off "Kokomo" on our sailing vacation these past two weeks and always scared that I'm going to mess up. I have the insurance but I don't think it will apply if I loose it in the ocean.

Now, what Jaws 3 and the gator in Lake Placid did to a chopper, a sea bass could do to that drone, so watch out!

I say bait that baby up and have some grilled sea bass for dinner!  make sure camera is on.

Andy: "I wish I had a dollar for every time I heard that one!"

Well, I bought one. Can't wait for it to get here.

If you set your drone down on salt water, be sure to rinse it in fresh as soon as you can afterwards. The drone may have a good IP rating, but I'll bet it doesn't resist brine corrosion.

Maybe put zinc anodes on it?

I was thinking just to use those things in case I mess up and it ends up in the ocean. Then I can rescue it with our dinghy. I don't plan on taking off or landing on water. But good point about the salt water.

@Fiddlerman and others.  I have noticed folding 3 blade propellers offered as an option for the mavic.  The increased efficiency afforded by the extra blade might offer longer aloft time.  They seem cheap enough.

I couldn't see it for the the Mavic Mini.

Irv said
@Fiddlerman and others.  I have noticed folding 3 blade propellers offered as an option for the mavic.  The increased efficiency afforded by the extra blade might offer longer aloft time.  They seem cheap enough.

I'm thinking those are for the spark.  not 100% sure though.

@Irv  Has the the flying machine arrived yet?

@GregW and others.  It came last week.  I have not opened the package yet (my wife is a microbiologist so we have been preparing the homestead for the coming flu problem).  Do you have any recommendations that will prevent the drone from flying off into the sunset the first time I take it outside?  I have heard that it is not unusual for that to occur with inexperienced pilots.  I have zero experience (I do know the physics, which is minor consolation).

@Irv  Funny you should bring up flying off into the sunset.  My first flying toy was a little foam plane with a small camera mounted in the nose.  Flying it on a windy day, the winds took it and sailed it away.  No more to be found.  The drones now have a return home feature that is set with the GPS and camera.  at least the dji models.  test it before getting carried away.  fly several feet away and see if home brings it back.

apocalypse preparedness....water,spam,beans,rice,meds,armory...extra violin strings. not necessarily in order of importance.

I thought that it was a joke, but I'm looking forward to seeing it in action. 😁

@GregW and @Fiddlerman .  My major concern was how to protect drone from falling fronds.  I think I have solved that issue by introducing mirrors in front of the camera so that the cutting device can be imaged while the drone is actually to the side of the frond.

@Irv  One good thing about the current flock of drones out there now is crash avoidance.  The picture is circa 2012 and shows results of high speed ground impact.  Notice the tape indicating this was 2nd high speed ground impact.  The maiden flight lasted 12 seconds and was followed by a sound I'm pretty sure was laughter from my nosy neighbor.  In a span of an hour I lost approx $120.00, 5 hours or so building and setting up, 2 weeks of " best r.c. plane for beginner internet searches", and pursuit of r.c. plane hobby.  I think the drones are more forgiving.  although I haven't attached a chainsaw to mine. 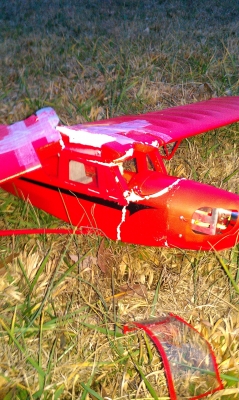 @GregW and others.  It is interesting how forum members (and forum creator) find this topic so amusing.  I possess several past job performance evaluations which stated, “Irv has no discernible sense of humor.”  Who knew?

Drone object avoidance software may become an annoyance to this project.  I need to hover the drone to within a few inches away from the palm tree.

@Irv  If you leave it (obstacle avoidance) on and extend the cutting device from the front and angle down when you mount it. that might give enough approach distance.  Cut the limb from slightly above.  Also as far as mirrors...It seems that the weight keeps increasing..so line of sight and the front facing camera still seems better.  You can disable obstacle avoidance.  also there are prop guards you can put on the frame of the drone.

Irv - Your creativity in thinking of a solution to a labor-intensive task is to be admired, and I wish you the best of luck in developing this concept.  Not to be a naysayer, but I have some recent experience in cutting palm fronds that I would like to share.

I have a palm (queen palm, I think) at the back of my winter Florida house that had a dead frond hanging down.  It was brown and unsightly, and attached to the trunk from a point about 10 feet in the air.  Having considerable experience trimming deciduous trees at my NJ house, I thought that I could deal with a single dead frond with ease.  Not so.  I put up a ladder, and climbed up the tree with a hand saw.  (Note:  the saw had coarse teeth, intended for tree trimming, etc.). Unlike hardwood branches which are dense, hard, and rigid near their bases, the frond is loose, pithy, and filled with very tough, fibrous strands.  When attacked with the saw, the entire frond base moves back and forth and is really effective in “catching” the teeth of the saw.  The saw binds and requires much force to break it free and cut the tough fibers.  This took way more effort than I expected.  While a finer toothed saw would have been more effective, I think that the binding problem will remain.  I don’t see how a lightweight drone will have the torque needed to deal with the floppy tough frond.

Also, the fronds are much larger and heavier than you would think. One falling on a drone (even with a protective cage) would take it down, I would think.  Finally, the cutting site lies below many other fronds which are alive and even tougher probably.  Not sure how you apply the cutting blade to the base of a frond with the overhanging fronds in place (may depend on the species of palm) while keeping the blades clear.

As a native northerner, these Florida plants are pretty tough buggers!  Good luck with your concept. I will follow your progress closely.

If I don't have time for a short post, I'll write a long post - (adapted from Mark Twain)