Fiddlerman's 2014 Group Christmas Project - We Wish You a Merry Christmas

Fiddlerman's 2014 Group Christmas Project - We Wish You a Merry Christmas

Finally after many many hours of mixing, I am done with the audio. Hopefully I'll get the video done this weekend so you guys can share the link with your friends and family, facebook, etc......

Here is a screenshot of the tracks on Digital Performer. The red is the first part,
Blue is the second, Yellow is the thrid, and light green is the fourth. Guess which part was mostly chosen? 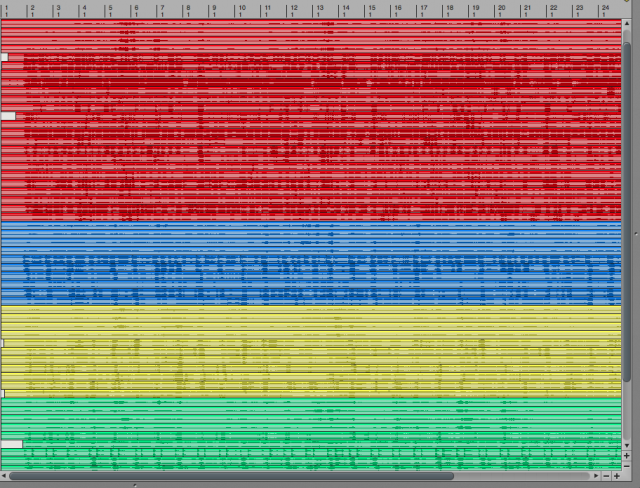 Woo hoo!! Can't wait to hear it. Thanks again for all your hard work. You rock!!

@Fiddlerman Big thank you for all the hard work that has to go into this.

Glad to see there was a decent amount of parts 2 - 4 when all was said and done.   I did 1 through 3 and had intentions of doing part 4 as well, but just ran out of time and energy and wimped out on it.

@KitsapFG - yup - let me second that - thanks to FM for all the effort!

I don't believe I've said welcome to you yet - so - WELCOME ABOARD !   And thank you for the video card!   Video editing and sound mixing - great fun, ain't it just!

Here is the credits list. If I left you out by mistake or have the wrong name or part, please let me know ASAP..... Thanks

Sorry I had to miss this one.  Just too busy lately.  Can't wait to see it though.

That's an impressive credits list and an impressive image of all the audio tracks. This is going to be another great group project!

Awe man! I can't believe I missed this one!!  I would have loved to try a project with my new violin!

Curious, what recording equipment & programs is everyone using?  I tried some basic stuff for a couple of tunes on YouTube & they didn't quite turn out like hoped.

@EJ-Kisz I use my Logitech HD Pro Webcam C920 but use an Audio-Technica AT2020 USB microphone with it (not the webcam mic).   I occasionally use an HD digital video camera we have (allows me to untether from my computer/music room) but it does not allow for an external mic so the sound quality is not nearly as good.  Works though.

I use my iPhone 5s. That's the only means I have for recording.

We miss you. I just used iPhone 6.  I need to work on using my camera or other devices.

I used my Playstation Vita to record both sound and video, but the quality is pretty bad. I got a new cable for my Nikon though, so whenever I record new stuff it's gonna be at least 720p. I also bought myself a Cardioid mic, and it'll arrive anytime this week, and whenever it does I'll do a video review.

Hmm....I don't have a web cam, but I do have a pro-quality Cannon Rebel 600D.  Apparently, they're supposed to be really good at videos, but every time I try, I seem to over load the on-board mic. Any mic recommendations?

Also, for Mac users, I just made the jump to an iPhone 5s & iPad.  When you record with them, do you use Garage Band?  I have the full version, but again, when it comes to recording, it doesn't seem to record the sound right.  Any tips?

I  have used my ipad to record. (Thaxted project.. it was horrible).  I was informed that the front facing camera wasn't very good... or not as good as the back.  On the recent video I used my Iphone 6.. still I used front facing.  We will see if it turns out okay. It seems okay to me but I am viewing on my iphone.??? If not I will have to go to using my camera.

The front facing camera on my iPhone 5s wasn't too bad.  I'm not too crazy about the sound quality though.  I'm half tempted to try just sound recording though Garage Band to see how that works.

You can see some of my Front Facing Camera Clips on my Instagram.  I'm not sold on the sound quality, but that might just be user-error.

I'm not even sure if those would be good enough for a project here.

Believe it or not, I use the FaceTime camera on either my MacBook Pro or my iMac to record my videos (all six of them, thus far).  The sound quality of the built-in mic, even turned all the way, leads a bit be desired, or is that the lack of bowing skill I have?  Still, that's how I recorded my submissions for the Christmas Project this year.  I still think a USB mic, like the Blue Yeti, would be much better.  With MPEG Streamclip, you can strip the audio out of the video stream and use the audio recorded off another mic (like the Blue Yeti) and have decent video and really good audio at the same time.  I think the FaceTime cameras have better resolution than the front-facing camera on your iPhone as well.

I do all my recording on a laptop running Windows.   For the EV I can record directly via the mic-in jack, with no discernable noise.   For my acoustic, I started off just using the inbuilt laptop mic - it picks up fan noise/rumble of course, but can be largely cleaned-out by post processing via Audacity and leads to an "acceptable" (but not "good") quality.  I had heard a lot about the Yeti mic, but eventually decided on the Samson C01U - an almost-studio quality usb cardioid pattern condenser mic.  It lacks the additional features of the Yeti - but boy am I pleased with it - faultless.   Electrically, it's as quiet as a mouse, absolutely no need for any post processing noise removal. [ Just as an aside, to complete the audio side of my setup, I have now got my sticky fingers on a BOSS ME 80 fx unit - so I now play my EV through that, into an external amp, and can either use the Samson mic to record "what the room hears" - so you could sing along to it or have a backing track playing - or - I can record directly from the output of the fx box to the mic-in on the lappy.]

This setup works well for just messing about in the front room, laptop on table and fiddle or guitar in hand!  LOL   Oh, and it is just perfect for StreetJelly.

For video, I have one of the many Logitech web-cams.  It has an inbuilt mic of course, but again on grounds of quality, I don't use it (other than for Skype)

The one down-side of the Samson mic is that it is USB only - it would have been a blast if it had a traditional analog jack / XLR as well - then it would have doubled up for use on the lappy and for live use directly through an amp with phantom power.

I appreciate this is off-topic but folks were asking.... LOL

Quick update.
I planned on doing the video this weekend but our daughter was very sick. We drove her to the hospital and was there until 4 AM on Saturday night. Yesterday, my wife drove her to the urgent care and the doctor sent her to the emergency on an ambulance so I drove straight to the hospital. Turns out that she had appendicitis and it was removed late last night. The operation was successful but she is a bit sad right now. She has 9 gigs booked this week and she is very hungry, LOL.
They won't let her eat just yet. Tough week...
In any case, please be patient with the project.

@Fiddlerman - sorry to hear that, but glad she's on the road to recovery.  Man, just take all the time you need - family comes first - you're not letting anyone down!