Why I should win the Black Metallic Electric Silent Violin

Why I should win the Black Metallic Electric Silent Violin

I only played on a violin once -- twinkle twinkle little star, years ago
when a friend tried to get me to accompany her violin solo with piano and I am
not a pro at all so I refused, she coaxed me by letting me try out her
violin:). The experience started an interest in me to take up violin one day.

I’ve learned to play quite a few instruments without owning one (other than
harmonicas and flutes), not even a rental one. I came from a poor family, it
was lucky that I even got to learn to play any instrument, owning an instrument
was beyond one’s dream. I went to my lessons either 30 minutes or an hour
before my lessons and stayed after my lessons if I could so I got some
practice. In addition, I grew green onions to pay for my piano, Chinese zither
lessons, as well as my high school tuition.

The first instrument I had formal lessons was piano when I was 15. After
having lessons for several years, one of my relatives sold his daughter’s piano
cheaply to my father. I finally owned one, but then I had to leave my home
country and could not bring it along with me. Meanwhile, I had the opportunity
to learn two other Chinese instruments, also without owning one. Then one of my father’s friends gave me his old instrument so I could practice at home.
However, I received the instrument roughly about the time I own the piano – before I leave my home country, so I had to leave it behind as well.

Had I been able to own whichever instrument when I was learning and was able
to bring it along while I moved to another country, I would have been able to
play better and still be playing! That's why I thought it would be nice for my
daughter to learn to play an instrument that she could bring along wherever she
goes; and violin would be a great choice. When she gets older, if she likes to
learn to play other instruments I will support her as well. If I win this
violin, I could motivate my daughter by learning along with her (also learn it
from the fiddlerman) and practicing together. Therefore, to fulfill my past and
current dream – to own an instrument while I am learning it, to learn it with
my daughter, and to play it for the children I work with, I think I should win
this violin. 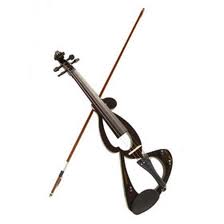 Time is running out.  Good luck everyone and may the best man women or child win

Yes - Good luck to everyone. Hope someone truly worthy wins.

i am 16 years old and have been playing the violin for 10 years. recently my younger cousin decided she wanted to "play" my black acoustic violin without my permission and now instead of having 1 beautiful violin i now have 1389273982635 pieces of a beautiful violin

. and at this time i can not afford the repairs or to buy a new one. my mother works 5 jobs to support or family and we still struggle to keep up with the bills.

i have an annual solo performance with my school in 4-5 months and im not sure if i can acquire a violin in time to learn the song(the devil went down to georgia by the charlie daniels band).

preforming is one of my favorite things. being a senior in a private high school trying to set aside money for college, i may not be able to acquire money for a new violin until my sophomore year of college.

i miss practicing everyday. if i were to win this violin i would use it to work towards mt goal of being a professional violinist and performer. i would also use to work towards my long term goal of beating David Garret's performance of flight of the bumblebee to become the worlds fastest violinist.

Okay, I'm not going to say some sad life story of mine, I'm just gonna come out with the truth. I've been wanting to play violin for years now, I joined band, but the teacher said we had enough violins, so I had to play clarinet for 2 years, when I fully knew clarinet, I again tried to switch, but the same problem came, and so I learned trumpet, I wanted to learn violin but my family didn't have enought money and my mom couldn't take me to violin lessons. After 1 year in trumpet, I had to move and when I was just giving up on my violin dream, I got a job to get enough money for lessons, but I couldn't get enough, and I found this website and if I do get the violin, that means I could at least teach myself violin on this website, or keep working for lessons. I am also an Honors student and I seriously want to thank you for making this wonderful website and putting up violin tips and lessons, I love this website.

The time is approaching my give-a-way.
Please review all the posts in this Topic and send me your votes for who should be included in the drawing.

NOTE: You can only vote once via a PM to me and not for yourself.

I'll put in my favorite as well and compile a list that will be ready at least a day before the drawing.

Good luck to everyone.

PS: If you have changed your mind about wanting to win this particular violin please let me know.

Should we ignore those with:

2: Met the posts(barely) but obviously no forum participation?

I bracketed the names in each page XD

It's gonna be tough to decide, personally. 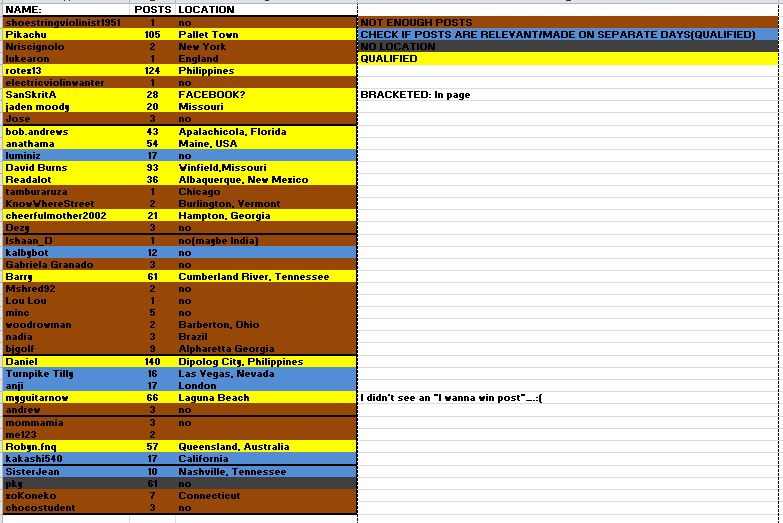 I wouldn't recommend ignoring people with no location, listing one was never mentioned as a requirement. Pky has contributed plenty to this forum and Pikachu definitely does not live in Pallet Town.

Hmmm ... correct ... location was not a prerequisite in the rules.

I for one am very interested in where people live and their differing experiences, but it's not vital that I know that.  I'm just curious.  It also may tell me what type of music they're interested in because of local availability etc.

Also Daniel, I thought it was a lottery, and the names went in a hat? ... Oh, you're casting your vote aren't you?

Best of luck everybody ... I hope this violin makes someone very very happy!

At first I was for ignoring them, but seeing that the issue is "almost" nonexistent with only pky, I changed my mind. The issue came up on page 2 of this topic though, so that's why I was asking.

Notice, that although pky didn't have a location, he has 61 posts, most of them relevant. Anyway, the "location thing" shows the qualified users that have no location.

Besides…if pky won, I'm sure Pierre would ask him for a mailing address

Lol Pikachu does…, he's on Route 2 outside Pallet Town

Yes, I hated making my recommendation with incomplete information, so I combed the topic and narrowed it down to 14 people(including me, pky, and myguitarnow-or not…did anyone see if he actually asked for it?). The odds aren't too bad, but I think it will get narrowed down even more after the voting.

I don't think Pky wanted this one, I think s/he wants to wait and try for an acoustic one:

Can't wait to win one of those

And I don't see myguitarnow's entry. I'm too lazy to scour all the posts though.

Thanks for the work you put in Daniel. This will help me a great deal. I think that anathama is right. Pky has not written a post showing any interest in this fiddle and neither has Myguitarnow. So I guess you list could be narrowed by two.

If there's only 12 people eligible, is there really any point in voting? I think you said you wanted to do a drawing from the 10 with the most votes or something, but if we can only choose from 12 then it's likely that only 7 or less will get any votes at all, and that won't eliminate 2.

Don't count out the 6 who passed the post requirements, but needs backchecking if they actually participated in the forum to the fullest

The odds are, with 174 members, all 18 will make it into the drawing

If there's only 12 people eligible, is there really any point in voting? I think you said you wanted to do a drawing from the 10 with the most votes or something, but if we can only choose from 12 then it's likely that only 7 or less will get any votes at all, and that won't eliminate 2.

@Daniel But how many do you think are actually going to vote?

And no, wait, Pky HAS written an entry, and it's on this very page.

then with that….it's 19 eligible for voting, right?

PKY is a VERY worthy member for this violin by all means.

What is your suggestion anathama? Should we put all 13 and possibly a few more before the week is over in a hat?

A vote makes a lot more sense with 19 entrants.

@Fiddlerman Well I thought that if only 12 or 13 people were eligible it would be best to put them all in a hat, since a vote would only be used to eliminate 2 or 3 people.

Umm, what about these members?

They all posted above 10, and those near 20 are okay, I guess, but what about those barely clearing 10?

That's a lot of work that Daniel has done! i tried to read all the post on this topic, but I don't know how to figure out if all those people have posted relevantly to discussion as well as how many they have posted since they posted on this topic, so Daniel, thank you!